Highlights:
Two scenic regions either side of Tucson containing particularly dense and flourishing forests of the saguaro cactus, plus many other Sonoran Desert plants. The west section is quite developed, with many short trails, while the east is more remote, and includes an extensive backcountry wilderness
Nearest cities with hotels:
Marana, Tucson
Management:
NPS
Location:
32.273, -111.2188 (west), 32.180, -110.737 (east)
Seasons:
All year, but longer hikes are best avoided during the hot summer months
Rating (1-5):
★★★★★
Weather:

Hiking - all trails in the west

Hiking - all trails in the east
Featured Hotel 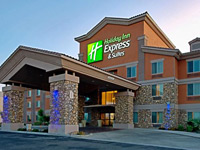 Affordable north Tucson hotel offering free breakfast and an outdoor pool, overlooking the course of the Santa Cruz River, beside exit 256 of Interstate 10

All hotels in Tucson - Affiliate disclosure
The saguaro cactus (Carnegiea Gigantea) is the state symbol of Arizona, appearing on all car license plates, and provides a universally recognized image of the Southwest. It is the largest and one of the slowest growing of all cacti, reaching up to 15 meters high and living for several centuries. Plants can weigh up to 8 tons, partly because of the large amount of water the stems can hold - after rainfall the cactus can absorb hundreds of gallons in a short time. The saguaro may be only 6 inches high after 10 years, and the characteristic branched appearance is reached only after around 80 years.

The cactus is widespread across southern Arizona, extreme southeast California and Sonora, north Mexico - see map below. Distribution is related to latitude and altitude - it is most commonly found between 1,000 & 3,000 feet, and because the saguaro can tolerate temperatures as low as 24°F (-4°C), it survives further north than any of the other species of large cactus. In the spring, the saguaro produce white flowers on the upper stems of mature plants so this is an especially good time to visit. Later, sweet edible red fruit appear, traditionally used by the local Native American tribes as food and also to make wine.

There are many densely forested regions in the Southwest but two areas of the Sonoran Desert either side of Tucson have been selected and preserved as Saguaro National Park - the Tucson Mountain (west) and Rincon Mountain (east) districts. The park was upgraded in status from a national monument in 1994, and besides the ever-present saguaro, also preserves a large variety of other cacti and desert plants, plus much interesting wildlife, although the majority is only active during the night. In 2020 the fees were increased to $25 per vehicle, good for seven days.

Branched saguaro
Of the two regions of the national park, the western section is about half plains, and half mountains, up to 4,687 feet (Wasson Peak), and is generally more visited than the larger eastern section, of which a relatively small area is flat lowlands, crossed by most of the trails; the majority of the land is higher ground, including several peaks over 8,000 feet. The general character of the two sections are similar, however, and a visit to either is just as rewarding. Organ Pipe Cactus National Monument also has many saguaros, together with other more unusual columnar cacti, and is more remote and less visited.

Gould Mine Trail
★★★★★
1.1 miles, 260 feet
Path up a cactus-studded ravine to the remains of an old mine; combined with parts of two adjacent trails to form a circular route of 2.5 miles

Hugh Norris Trail
★★★★★
4.9 miles, 2,130 feet
Longest trail in the park, following a ridge of increasing height all the way to a high summit, for unsurpassed views of the surrounding mountains and desert

Signal Hill Trail
★★★★★
0.2 miles, 50 feet
Popular route to a low, boulder-covered summit, where many of the rocks are adorned with petroglyphs
East (Rincon Mountain) 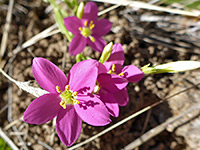 Photographs and descriptions of flowering plants found in Saguaro National Park, including cacti 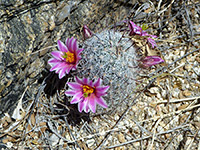