Puerto Blanco Drive
Very scenic route across cactus plains and mountain foothills, and alongside the Mexican border. Some parts require 4WD. Most is one way, from north to south
Coronavirus update (December 1st): The park is operating as normal

The desert west of Tucson is about the hottest and driest in the USA. Much of the land is within the boundaries of the huge Barry M. Goldwater Air Force Gunnery Range and closed to the public but another large tract is given over to an Indian reservation, home of the Tohono O'Odham people. The whole area is quite densely covered by various types of cactus including the ubiquitous saguaro, sacred to the local tribe, and the much rarer organ pipe (stenocereus thurberi), which grows only in the far south of the state and particularly strongly in the Organ Pipe Cactus National Monument, an extensive section of pristine desert bordering Mexico.

The national monument is far from other popular tourist sites and is relatively little visited. There are only two approach roads in Arizona; AZ 85 from Phoenix and AZ 86 from Tucson,
Affiliate disclosure

the latter crossing the Tohono O'Odham reservation and passing close to the Kitt Peak National Observatory, the largest such establishment in the world, which is open free of charge to visitors. The journey is also notable for two very long straight stretches of road, through never-changing land filled with saguaro, making for quite a hypnotic driving experience. The two roads meet at the curiously-named town of Why, a small place whose facilities are limited to a few motels and gas stations. From here AZ 85 heads due south into the monument, and is also mostly dead straight - two long linear stretches are separated by a short higher section through the edge of the Diablo Mountains, which provides a vantage point for the border control; one or more of their vehicles are parked here all day, as the rangers scan the desert for any signs of activity. Driving south past the hills, the saguaro grow every more densely and are joined by the organ pipes, while large cholla and barrel cacti are also much in evidence.

Once inside the monument, AZ 85 passes two roadside information points and a graded side track to Alamo Canyon (from where a trail leads along a scenic narrow valley to an old well), but there isn't much else of specific interest until the park headquarters and campground, 22 miles south of Why. Information and other visitor services are provided by the Kris Eggle Visitor Center, renamed in 2002 to commemorate a young NPS ranger who was killed by Mexican drug smugglers - an event that amongst other consequences has prompted construction of a more secure fence along this part of the international border. Although there are plenty of cacti along the highway, and a nature trail by the visitor center, a much better appreciation of the landscape is achieved by traveling along one of two unpaved tracks: the 37 mile Puerto Blanco Drive to the west (most of which requires a 4WD vehicle, however) or the 21 mile Ajo Mountain Drive to the east. As both these tracks also start near the visitor center, all activity along the main road is concentrated in this one place, though the drive further south is still scenic, and the highway continues another 5 miles through the cactus forest to Lukeville at the border with Mexico.

Cross-country hiking is permitted in the monument - despite a variety of dangers including heat, lack of water, spiky plants, poisonous snakes and the possibility of encounters with armed smugglers and illegal immigrants - but most people stay on the maintained trails, of which only five are easily accessed: Alamo Canyon, Arch Canyon, Bull Pasture/Estes Canyon, Baker Mine/Red Tanks Tinaja/Senita Basin and Victoria Mine. Camping within the park is allowed at just two locations; the main campground near the visitor center and a primitive site at Alamo Canyon. For free camping (on BLM land), the nearest good location is along a dirt track forking west off AZ 85 beside Gunsight Wash, 2 miles south of Why. The official campground is pleasantly scenic, set on a slight slope that allows partial long distance views southwards, and the sites are well-spaced, separated by tall cacti.

The organ pipe, which is much more common in Mexico, is distinguished from the saguaro by having thinner stems and by branching mainly from the base instead of from higher up the central trunk. The national monument contains a third species of columnar cactus that, like the organ pipe, is not found anywhere else in the USA, namely the senita (pachycereus schottii) which also branches from the base. This species has slightly thinner stems with fewer ribs and tufts of whitish hair around the growing points, and is found only in a few frost-free areas at the very south near the Mexican border, especially in Senita Basin, though this is no longer accessible by road owing to the closure of the Puerto Blanco Drive. Most of the senita in the basin are not in very good condition, as they are very prone to damage during the occasional cold spells that affect even this southerly location. Within the monument, various species of opuntia and ferocactus are widespread as well as other characteristic Sonoran desert shrubs such as ocotillo and palo verde. The total number of plant species in the area exceeds 800 - see www.aznps.com/Floras/OPCNM.pdf for a complete list.

At the south edge of the monument, the tiny town of Lukeville (known colloquially as Gringo Pass) has a cheap RV site beside the highway, a short walk from the surrounding desert. Mexico is only half a mile further south; there are several shops just across the border but little else, although the city of Sonoyta is just a few miles beyond. Saguaro National Park near Tucson is fairly similar to the Organ Pipe Cactus National Monument, the main differences being the types of cacti found there, but the latter has a heightened sense of isolation, and is rather more rugged and unspoilt.

Victoria Mine Trail
★★★★★
2.2 miles, 100 feet
Mining relics in the Sonoyta Mountain foothills, with good, long distance views along the way 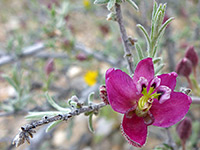 Top of a cristate saguaro

For hiking in Organ Pipe Cactus National Monument, the 1:69,444 scale topographic map from National Geographic/Trails Illustrated is a good choice; this has the map on one side and general park information on the other.