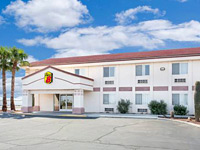 The only chain lodging in Quartzsite, 20 miles north of Palm Canyon Road; an affordable, pet friendly motel at the Pilot Travel Center, near I-10 exit 17

Hotels in Quartzsite - Affiliate disclosure
For 57 miles, US 95 cuts through the desert of southwest Arizona - quite flat, perfectly straight and aligned exactly north-south, and interrupted only by the small town of Quartzsite. In the mild seasons of winter and early spring, much traffic uses the road, bringing sun seekers from all over the US to Yuma and on into Mexico, but not so many travel to this region in summer, when temperatures of over 120°F are not uncommon.

Rain falls on only a few occasions each year, as the summer monsoon thunderstorms that affect the higher areas of Arizona rarely extend this far west. South of Interstate 10, US 95 is bordered by Yuma Proving Ground to the west and Kofa National Wildlife Refuge to the east - a protected area 25 by 40 miles in extent with no paved roads or facilities of any kind. The refuge is an excellent place for viewing desert plants and wildlife, rock climbing, exploring old mines, or just camping in remote wilderness.

Many unpaved roads traverse the 660,000 acres of Kofa National Wildlife Refuge (see map), from the New Water and Kofa mountains in the north, across the wide King Valley in the central section to the Castle Dome Mountains towards the southwest, and the Tank Mountains in the southeast. Most of these require 4WD vehicles, and detailed maps for navigation. East of the NWR lie many more miles of uninhabited valley and mountain wilderness with only limited access. This part of Arizona, between Interstates 8 and 10 is the epitome of a hostile desert environment, but one which is well worth visiting. The most well-known attraction within the wildlife refuge is Palm Canyon, a narrow, sheltered ravine which is the last significant location in Arizona where palm trees grow in their natural habitat. The road to the mouth of the canyon is a 7 mile gravel track, heavily ribbed for most of its length, that takes around 30 minutes to drive, although it is fine for 2WD cars. Another generally good route (Blevens Road/Pipeline Road) crosses the north section of the refuge, linking with Vicksburg Road from Interstate 10. There are three other maintained routes: King Road (22 miles) passes through a gap in the Castle Dome Mountains into the vast plain of King Valley, then moves northwards to the main mining district, centered on the King of Arizona Mine, from which this area was named early last century. Another mining region is reached by Castle Dome Mine Road to the southwest; this crosses the edge of Castle Dome Plain, reaching the mine site after 9 miles. Here are found a collection of wooden buildings, some authentic, others replicas. MST&T Road traverses more open terrain to the north, ending at a communications tower, after passing various junctions along the way.

Photography, hiking, rock climbing, hunting (for such animals as deer, rabbit and coyote) and primitive camping are the main leisure activities, and many days could be spent exploring the refuge. The NWR has dozens of old mines, which are interesting to visit although the unfenced shafts and unstable tunnels can be hazardous. A few mines are still operating, and some parts of the refuge are privately owned. Colorful rocks and minerals may be found in many places, but collecting is officially permitted in only one location - Crystal Hill, in the far northwest corner, 6 miles along Blevens Road. 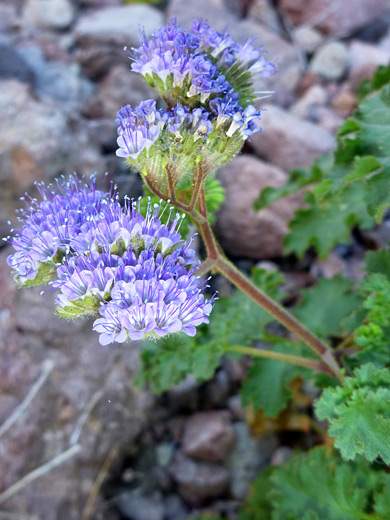 Various wells and springs that sustain small oases of flourishing plants are found at scattered locations in the mountains, while many species of cacti are widespread across the whole area - most common are the giant saguaro, ferocacti and several types of opuntia. Wildlife, nominally the main focus of the reserve, is rather limited, as expected for this very hot, arid environment. Bighorn sheep are the largest creatures, and a herd now numbering over 1,000 has benefited from artificial enhancement of natural water sources, though they spend most time in the hills and are rarely glimpsed. Typical desert animals such as lizards and snakes are quite easily spotted.

Palm Canyon Trail
★★★★★
0.5 miles, 300 feet
A short path - steep and uneven in places but not at all difficult - leads along a canyon to a viewpoint of a grove of palm trees. More of the canyon can be seen by off-trail hiking 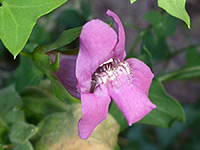 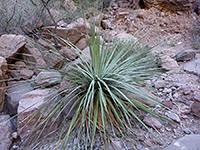