Highlights:
Extravagantly eroded hillside at the edge of the high Paunsaugunt Plateau - thousands of delicate pinnacles in beautiful shades of orange, pink and white; one of the highlights of the Southwest. Two dozen overlooks and a fair selection of trails, plus many visitor facilities
Nearest city with hotels:
Bryce Canyon, adjacent
Management:
NPS
Location:
37.640, -112.168 (park entrance)
Seasons:
Open all year. Heavy snow in winter; trails are clear by mid spring
Rating (1-5):
★★★★★
Weather:

Scenic Drive
Viewpoints and other sites along the park's 18 mile scenic road, which ascends gradually to the south, peaking at 9,115 foot Rainbow Point
Featured Hotel 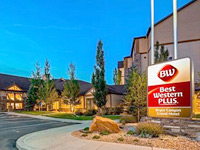 All hotels in Bryce Canyon - Affiliate disclosure
Bryce Canyon National Park does not contain one main canyon, but rather a dozen smaller ravines eroded into the east side of a ridge running approximately north-south at the edge of the Paunsaugunt Plateau in southwest Utah. This erosion has resulted in thousands of bizarre and fragile rock formations, large and small, in many subtle shades of pink, white, yellow, orange and red, extending in quite a narrow band for over 25 miles along the plateau rim. The national park is named after Ebenezer Bryce, a Mormon farmer who was the first modern-day settler in the region, and was established in 1924.

The main ridge forms part of the Pink Cliffs, which are the highest and most geologically recent of a series of escarpments known as the Grand Staircase that stretches across much of south Utah, formed by erosion and uplift of differently colored sandstone rock layers. The cliffs are named according to the dominant rock color: (running northwards, from the Grand Canyon) - Chocolate, Vermilion (visible most spectacularly around Lees Ferry, Arizona), White (which surround Zion Canyon), Gray and Pink. Most of the Grand Staircase is now contained within the BLM-managed Grand Staircase - Escalante National Monument. The rocks that give Bryce Canyon its distinctive colors are members of the Claron Formation, a mixed limestone/sandstone layer, and are also found exposed, with similarly intricate forms, in other nearly locations such as Red Canyon and Cedar Breaks.

Water is responsible for creating the rock shapes in Bryce Canyon National Park. Rain and melting snow flowing down the Pink Cliffs towards the Paria River form ridges, or fins, which subsequently erode into the spires, pinnacles and other shapes (collectively known as 'hoodoos') which are left standing. In time these too erode, and the whole process moves very gradually westwards as more of the cliff is slowly worn away. During the long, cold winters, the cliffs are further weakened by freezing water expanding in cracks, resulting in more erosion when the ice thaws in spring.

Bryce Canyon is reached by only one road - scenic highway UT 12 which crosses the northeast corner of the park. The park scenic drive forks off to the south, follows the top of the ridge for 18 miles, and has 14 viewpoints (see map) of which Bryce Point is the most famous and gives the best perspective of the extent and variety of the rock formations. The first overlook is Fairyland Point, a pretty side valley like a small-scale version of the main canyon. This is reached before the park entrance station, and so can be appreciated without payment, though it isn't signposted when traveling south, only north when leaving the park. From all the viewpoints it is often possible to see 100 miles south and east over the Paria River valley towards Lake Powell and the Grand Canyon.

The growth in visitation over the last few years has required a major renovation of the latter stages of the park road, and has led to the introduction of a shuttlebus service aimed at reducing congestion at the most popular viewpoints, though use of this is not compulsory as is the case for other busy Southwest parks like Zion and the Grand Canyon. The shuttle operates from mid May to late September, runs about every 12 minutes, and stops at 11 locations including all the viewpoints as far south as Bryce Point. Current entry fees (2020) are $35 per vehicle or $20 per person, which are at the top end of NPS charges, comparable with other major places like Grand Canyon, Yellowstone and Zion. The best value, if visiting multiple parks, is always the Interagency Annual Pass ($80), which gives unlimited access to over 400 federal fee areas.

As with most national parks, the best way to appreciate Bryce Canyon is to explore away from the main roads.
Affiliate disclosure

There are various trails both along the rim and down through the formations, but probably the best is the Fairyland Loop Trail, an 8 mile, little-used route which descends 900 feet from the ridge road and winds through many of the fins and spires giving a more intimate view of the park. Hiking just part of the route is enough for nice views; the other most popular paths nearby are the Navajo, Peekaboo and Queens Garden trails. Many of the formations in this part of Bryce Canyon have received official names, like Tower Bridge, reached via a short side-track, which resembles one of the Thames bridges in London. There are more features of interest besides the rocks, such as along the one mile Bristlecone Trail, at the far south end of the park, which passes several 1,600 year old bristlecone pines; these are the longest lived species of trees in the world. Other short paths include the Hat Shop Trail to a group of unusual pinnacles, and the Mossy Cave Trail to a waterfall and a sheltered alcove.

Descriptions of all trails in Bryce Canyon

Temperatures in Bryce Canyon are always less than other parks in south Utah due to the high elevation (7,900 feet at the visitor center, rising to 9,115 feet at Rainbow Point, at the south end of the park road), hence even summer hiking is usually comfortable. However, the altitude does mean that the air is thin, so there is less oxygen. Snow may be present for six months during winter and spring - some of the deep snow drifts remain well into June - and although the national park remains open all year, the lower section of the scenic drive may be shut for days at a time if conditions become hazardous. The park is especially beautiful at sunrise, when the rapidly changing light and shadows make the landscape even more magical. Sunsets are not quite so good, since the main ridge shields the park from the west.

Bristlecone Trail
★★★★★
1 mile, 200 feet
Path along the edge of the plateau at the southern end of the scenic drive, also passing several ancient bristlecone pine trees

Mossy Cave Trail
★★★★★
0.8 miles, 300 feet
This trail is different to most in the Bryce Canyon area as it leads along a small stream to a waterfall and a cool alcove fringed by curtains of moss

Navajo Trail
★★★★★
1.3 miles, 520 feet (loop)
The most popular trail, descending a steep, sheer-sided ravine and returning past many formations

Peekaboo Trail
★★★★★
5 miles, 900 feet
The best (relatively) short loop hike in the park, passing a spectacular array of formations, without too many other visitors

Queens Garden Trail
★★★★★
0.9 miles, 320 feet
Popular path that descends a sloping ridgeline then winds across several ravines to a sheltered basin circled by a ring of delicate, colorful hoodoos. Other paths continue

Riggs Spring Trail
★★★★★
8.5 miles (loop), 1,650 feet
A long, lightly used path, mostly through woodland below the rim at the south end of the plateau, with views of the orange cliffs above 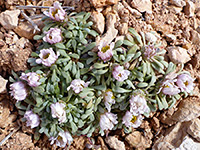