The best short loop hike in Bryce Canyon National Park, passing a spectacular array of formations, without too many other visitors. Good views both of individual hoodoos close up and of large groups of more distant features

Length: 3 miles round trip, or 5 miles including the access trail

The most spectacular part of Bryce Canyon National Park, with the largest and densest formations, is the two mile section between Sunrise Point and Bryce Point, centered on the upper drainage basin of Bryce Creek. A network of hike and horse trails wind through the ravines and ridges, accessed from three points on the rim, so a variety of loop hikes are possible, but the best path is probably the Peekaboo Trail, itself a 3 mile loop, but viewable via a minimum hike of 5 miles if starting from Bryce Point; as well as giving many amazing views of the main collections of hoodoos, both near and far, the path also crosses forested terrain, lower down the hillside, where the more isolated formations contrast with the green and shady surroundings.

In addition, this trail is the furthest from the trailheads hence receives the fewest visitors, so hiking is more peaceful; in this respect the route is second only to the longer Fairyland Loop Trail to the north. Although fairly level overall, the Peekaboo Trail has many short, steep climbs and descents and is a little more strenuous than might be expected. It may be hiked all year but is easiest once most of the winter snows have melted, usually by mid April. The only negative aspect, for hikers, is that the trail is also used by mules.

22 views along the Peekaboo Trail.

Panorama from a ridge along the Peekaboo Trail. Full screen version (27 mb).

View east down one of the upper tributaries of Bryce Canyon

The Peekaboo Trail can be accessed from three places on the plateau rim. The shortest approach is from Bryce Point, from where a 1 mile path drops 600 feet to an intersection at the southern end of the loop, en route passing a junction with the Hat Shop Trail. The path may be closed during spring to allow post-winter maintenance, as is the case for the second approach, starting at Sunset Point. This is the trailhead for the popular Navajo Trail, and walking either half (0.6 miles) reaches a four-way junction, the other branches being a short connector to the north end of the Peekaboo Trail, and a link to the third approach, via the equally busy Queens Garden Trail from Sunrise Point. Considered the easiest way to descend from the rim, this trail drops steeply by 320 feet to the garden - a sheltered basin beneath a curved row of pinnacles - and then continues, now more level, around a hillside to the junction at the end of the Navajo Trail. The description below starts from this intersection.

Start of the Loop

Beginning at the signed junction at the far side of the Navajo Loop Trail and the path from Queens Garden, another path heads south and crosses the upper end of Bryce Creek, a small but fast flowing stream in spring and early summer but completely dry later in the season. When snow is melting the creek's tributaries carry differently-colored water, reflecting the color of the rocks where it originates. After following the valley downstream a way, and passing another junction with a horse trail from Queens Garden, the connecting path reaches the north end of the Peekaboo Trail, from where the next junction (with the alternative approach route from Bryce Point) is 1.7 miles via the west part of the loop or 1.3 miles via the east. Both sections are similar in that they start with a steep climb then have other short, sharp elevation changes; the main difference is that the east path is more varied in scenery, mixing hoodoos with wooded ravines (which hold snow for a longer time after winter), while the west part encounters just the eroded formations and gives better views of the plateau rim.

Snow along the trail

The west part of the Peekaboo Trail ascends steadily up the south side of Bryce Creek valley, straight at first then zig-zagging up to a treeless ridge below Inspiration Point, and a good panoramic view of the formations at the edge of the plateau (see 360 degree panorama). Next are several large hoodoos around a butte known as The Cathedral, as the trail gains a little more height, passes through a cutting into a small ravine, then through a short tunnel to a narrow, sheltered gully, where it drops down very steeply via switchbacks. This is followed by another climb, to a viewpoint of the Wall of Windows, a dramatic, sheer-sided ridge of light colored rock topped by many graceful pinnacles and several natural arches. The cliffs ahead become predominantly white as the next high promontory approaches (Bryce Point), while the trail passes by a horse tethering area and some rest rooms, then has a short ascent to the half way junction, signed Bryce Point, 1 mile.

West Section of the Loop

From Bryce Point the Peekaboo loop turns north and runs along the east side of quite a wide, wooded valley that contains just a few hoodoos, crosses over to the left side and rounds a hillside to the next drainage, also quite shady, with tall pine trees and large, isolated orange formations. A steep climb back to the main erosional layer leads to a particularly pretty area of varied features including a row of slender white pinnacles, some orange hoodoos topped with unusual, fractured sandstone, a range of differently shaped and colored rocks known as Fairy Castle, one especially tall and prominent spire, and many more distant ridges extending back south towards Bryce Point. The Peekaboo hike is completed by a long descent, with switchbacks, towards the junction near Bryce Creek. 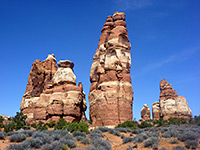 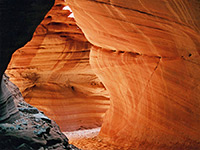 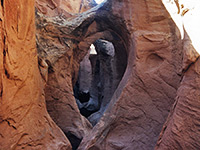