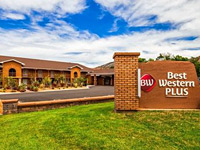 Reliable hotel with onsite restaurant, on the east side of Cedar City, 21 miles from Cedar Breaks. Hot breakfast is complimentary

All hotels in Cedar City - Affiliate disclosure
Located close to I-15 high above Cedar City, Cedar Breaks National Monument contains a steep, bowl-shaped cliff face eroded into the west side of the Markagunt Plateau, similar to Bryce Canyon National Park (though much less visited), with colorful strata and many strange rock shapes.

The access road (UT 148) circles the cliff edge from which the spectacular limestone formations can be seen, extending 2,000 feet downwards and three miles across, all eroded from the Claron Formation of the Pink Cliffs - the highest and most geologically recent component of the great series of escarpments that stretches eastwards across south Utah, known as the Grand Staircase. Some areas of the cliffs are even more brightly colored than at Bryce Canyon, and present an enchanting mixture of delicate shades of red, yellow, white, pink and orange, like the icing on a extravagant wedding cake.

Cedar Breaks National Monument can be reached from four directions. In the north, UT 143 climbs quite steeply from Parowan on I-15, passing the Brian Head ski resort and into the northern part of the national monument, then turning away east, through more hilly woodland to Panguitch near Red Canyon. The other road is UT 14, approaching from Cedar City up a steep canyon - it ascends 4,000 feet in 18 miles, and once past the turning to Cedar Breaks continues to US 89 at Long Valley Junction. The scenic drive through the monument reaches a summit of 10,400 feet, and all of the surroundings are of similar height, so during the winter the area receives heavy snowfall, which often does not melt completely until July when maximum temperatures are only around 70 °F. For this reason, the road through the park is normally closed to vehicles between November and April.

Besides the immediate spectacle, the views further west from the cliffs are also dramatic, extending to the Nevada desert on clear days. During late spring and summer, the Alpine meadows on the plateau become filled with grasses and brightly colored wildflowers. There are four principal overlooks, either right beside the road or at the end of very short paths; Point Supreme behind the visitor center, Sunset View half a mile north, Chessman Ridge on a promontory just beyond, and North View, near the northern edge of the formations. A small campground, open during the summer only, is located near Point Supreme; pleasantly sited though nearly always cold at night, since even in August, the temperatures may fall below freezing. Hiking in Cedar Breaks National Monument is quite limited as, unlike at Bryce Canyon, there are no trails down the cliff face since the ground slopes too steeply, but short walks along the rim and through pine forests lead to several alternative viewpoints. So, there is not that much to do but this is a pleasant place to rest and camp for a while in the summer.

Within the national monument are just two major trails; one along the rim and another through woodland to a sheltered pond. Spectra Point/Ramparts Overlook is an easy two mile hike, starting from the visitor center, heading along the cliff edge for a short distance then on past a promontory that juts out into the southern part of the amphitheater, to a similar, slightly lower elevation overlook. An unofficial, off-trail continuation leads to a secluded stream (Shooting Star Creek) that tumbles over the plateau edge, and also an isolated promontory, The Bartizan, which contains an angular arch. In contrast, the Alpine Pond Trail has only fleeting viewpoints of the formations but instead encounters trees, meadows, flowers and wildlife en route to a shallow, tranquil pool fed by snowmelt and a spring. Just beyond the north edge of the monument, a longer trail (Rattlesnake Creek) descends through forests of fir, spruce and aspen into the Ashdown Gorge Wilderness, a remote region centered around a steep, narrow limestone ravine. Wildflowers are abundant along the path, especially the upper part, and it offers occasional distant views of the Cedar Breaks cliffs, before entering thicker forest, later crossing a grassy plateau and descending into the deep, shady ravine.

Alpine Pond Trail
★★★★★
2.2 miles, 200 feet (loop)
Loop across a wooded section of the rim, past a scree slope and a shallow pond; many wildflowers in the summer

Rattlesnake Creek Trail
★★★★★
3.8 miles, 2,400 feet
Lightly-used trail along part of the rim then steeply down through forest and meadows to a canyon within the Ashdown Gorge Wilderness

Spectra Point & Ramparts Overlook Trail
★★★★★
1.8/2.6 miles, 600/850 feet
Path along the rim to a pair of spectacular viewpoints. Off-trail continuation to a stream and a promontory with arches
Map of Cedar Breaks National Monument

Nearby places
Similar places
Bryce Canyon National Park - rocky pinnacles and spires, in many shades of brown, pink and orange