Shortest and most popular path in the Island in the Sky district, leading to a thin, graceful arch right at the edge of the plateau, framing distant canyons and mountains to the east

Trailhead: East side of the scenic drive, near the spur road to Upheaval Dome

The 0.6 mile loop to Mesa Arch is the shortest, easiest and most used path in the Island in the Sky region of Canyonlands National Park, sufficiently popular that at some busy times the large parking area at the trailhead fills up completely and there may be dozens of people at the arch, so taking an unobstructed photograph is not always easy. The Navajo sandstone arch is relatively small and has formed right at the edge of the mesa with most of its span below the rim so that only the top part is visible, hence the structure is not so spectacular itself, but photogenic due to what is visible through the opening - many square miles of red cliffs, ridges, ravines and pinnacles around the deep, branched canyon of the Colorado River, with the La Sal Mountains beyond, 35 miles distant.

Sunrise is a particularly favored time to visit, just as the first rays strike the underside of the arch, coloring it rich orange-gold and creating one of the most iconic images of the Southwest; even in mid summer, when this event occurs before 5 am, there may be a dozen or more people waiting. The view is still good at any time of day, however, though the ambience can be spoilt by the number of visitors.

The path climbs slightly up a low hill, crossing bushy, sandy terrain then descends gradually to the arch, at the cliff edge. The return part of the loop is around the north side of the hill, and the whole trail is accompanied by notices describing some of the local plant life, including pinyon pine, Utah juniper, opuntia and echinocereus. The visible span of Mesa Arch is 90 feet across, and depending on the angle of view the opening can frame different scenes including the mountains to the east, the red rocks around the river or the tall Wingate cliffs at either side. The arch sits 1,500 feet above the three forks of Buck Canyon, which converge then meet the Colorado River 5 miles east, and are partly surrounded by the flat White Rim. The sheer cliffs at the edge of the mesa curve outwards either side of the arch and form two narrow ridges, projecting eastwards a way and topped by several narrow pinnacles, one of which also contains a small opening, known as Washer Woman Arch. 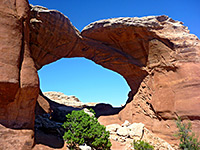 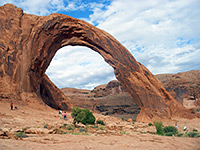 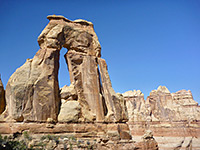 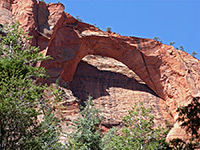 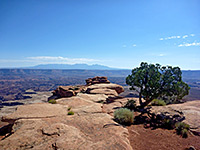