Leading south from the parking area at the end of the scenic drive, this trail leads to a fabulous viewpoint right on the southern tip of the Island in the Sky plateau

The level, one mile Grand View Trail is an easy and popular route to one of the finest panoramic overlooks anywhere in the Southwest; right at the southern tip of the Island in the Sky plateau (Grand View Point), the views encompass many miles of the Green and Colorado river canyons, vast areas of red rock cliffs and ravines at either side, and distant mountain ranges on the horizon.

Like other nearby viewpoints the scenery, although spectacular at any time, is best near sunset, especially to the east, where a group of spires and thin ridges (Monument Basin) cast long shadows over the surrounding deep red cliffs. Of incidental interest along the trail are several narrow, very deep cracks in the bedrock, which inside create pretty reflected light effects, similar to a slot canyon.

The relatively small parking area at the Grand View trailhead is located at the end of the scenic drive, 14 miles from the national park entrance station and 43 miles from Moab; a drive from here takes around 90 minutes, since some of the route is narrow and winding.

Tree on the plateau edge

The Grand View Trail heads southeast, initially along the east rim of the plateau, across flat, reddish rocks right next to the cliff edge, then veers away towards the west side for the remainder of the hike where the route is marked by cairns, though the flat slickrock and limited vegetation make it easy to walk anywhere. At the end of the Grand View promontory are several raised blocks of sandstone that provide the best vantage points, maybe ten feet above the floor; in the foreground, the views encompass several miles of the White Rim, 1,000 feet lower down, with Monument Basin to the east, Junction Butte to the south and Murphy Hogback to the west. The Green and Colorado rivers are beyond, their canyons quite evident though water is visible only for a short section of the Green River to the west, near Soda Springs Basin. The Maze and Needles districts of the park are further away to the south, either side of Junction Butte, backed by the distant Henry and Abajo Mountains.

Half way down the cliffs at Grand View Point

Slot Canyons and a Route to the White Rim

One reason the path veers westwards may be to avoid a number of deep, narrow clefts in the rock; at least two go down several hundred feet (a dropped stone bounces for 6 seconds), yet are just a few feet across. One of them, nearest the east edge of the plateau, is 100 feet long and can be entered fairly easily from the south end, climbing down maybe 30 feet to an intermediate ledge where the colorful, streaked rock forms an enchanting, subway-like passage resembling a short slot canyon. A narrow gap in the floor drops vertically down to unseen depths, soon becoming pitch black, so needless to say this feature should only be explored with great care. The ravines are presumably the first stages in splitting of the rock that will in many millennia lead to a reduction in the width of the plateau. Another possibility for further exploration is an unmarked and difficult route from the plateau all the way to the White Rim; starting northwards down a steep gully east of the largest ravine, the route soon veers back south, traversing very steep and sometimes unstable ground with much exposure and some class 4 climbing, eventually arriving at the top of the scree slope beneath the Wingate cliffs, from where hikers can head east to Monument Basin or south towards Junction Butte.

Red rocks to the south 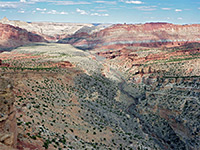 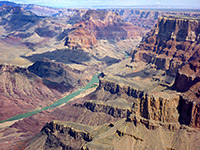 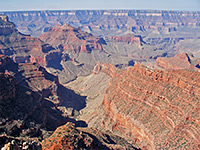 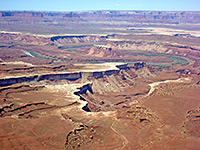 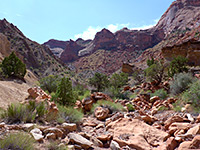