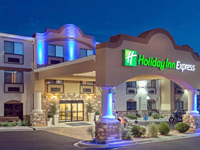 Half a mile south of Arches National Park; a popular hotel with scenic surroundings, a few miles from both ends of the La Sal Loop. Free hot breakfast

All hotels in Moab - Affiliate disclosure
The La Sal Mountains of southeast Utah are familiar to most visitors as the dramatic, often snow-covered backdrop to many of the viewpoints in Arches National Park and the Island in the Sky district of Canyonlands National Park; the peaks themselves are not much visited, despite being close to Moab, and crossed by plenty of roads and trails.

The main access is via the La Sal Mountain Loop Road, a 37 mile route, all paved though narrow, steep and winding in some places, which starts in the north at Castle Valley, south of the Colorado River, climbing steadily to a height of 8,050 feet, curving across the northern and western slopes then descending to an alternative start point in Spanish Valley, south of Moab. Views are excellent, of the two national parks and the city, and of many more distant features.

The highpoint of the La Sals is 12,721 foot Mount Peale, one of a cluster of closely-spaced summits at the center of the range, also including the second and third highest, Mounts Mellenthin and Tukuhnikivatz. To the north, on the far side of Geyser Pass, is a second, larger group, in which the tallest peaks are 12,331 foot Mount Waas and 12,272 foot Manns Peak, while third and smallest group lies to the south, the main summit being South Mountain, 11,817 feet.

Path through aspen
The mountain sides have some isolated craggy sections but most are relatively smooth, and treeless, allowing straightforward approaches, though only a few of the summits are reached by an official trail. Below the peaks are small lakes, streams flowing through valleys, extensive grassy meadows and thick pine/aspen/spruce woodland, and the western and northern slopes can be reached from many points, on tracks and trails starting along the loop drive. The east side of the mountains is less accessible. All the peaks and the western slopes are part of Manti-La Sal National Forest; primitive camping is available in many places and there are three established campgrounds, at Masons Draw, Oowah Lake and Warner Lake.

Map of the La Sal Mountains.

Like the other three major mountain ranges in southeast Utah (Abajo, Henry and Navajo), the La Sals were formed by igneous intrusions, forcing through the pre-existing sedimentary rocks that make up the remainder of the Colorado Plateau. The high elevations keep the upper slopes snow-covered until June, though by late summer the ice has melted, conditions are usually mild, and all areas can be explored. The treeline extends to around 10,000 feet; above are grassy, tundra slopes, home to many wildflowers including several endemic species, such as erigeron mancus. The name of the mountains ('the Salt' in Spanish) was bestowed by the Dominiguez and Escalante expedition in summer 1776, as it was thought that the white covering could not still be snow, since everywhere else in this region was very hot. 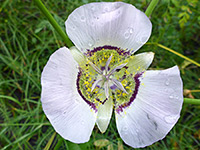 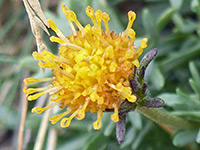 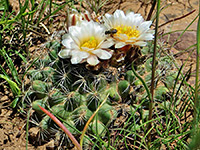 
Wildflowers of the La Sal Mountains

The south end of the La Sal Mountain Loop parallels US 191 for a few miles, along the middle of Spanish Valley, then curves round to the east, following a drainage (Pack Creek) over fairly level ground until reaching the foot of Bromley Ridge, where it starts a steady climb, up a succession of benches and slopes, composed of upturned, eroded red sandstone of the Glen Canyon Group. On the outside of the first major switchback is a faint trail to a slot-like drainage unofficially named Entrajo Canyon, a tributary of Mill Creek. The road enters pinyon/juniper woodland at around 6,000 feet then levels out at 7,500 feet though remains very curvy, crossing Mill Creek and several lesser streams while moving generally north then east, before passing over a divide and turning northwards, as Castle Valley first comes into view below. A straighter section is followed by more bends, as the road descends sharply, soon reaching the junction with a route around the east side of the mountains, leading eventually to Gateway in Colorado. The last part of the loop drops down a little more into the valley, heading towards the Colorado River beneath several famous red rock formations including Castle Rock and Parriott Mesa. Without stops, the 37 mile journey from US 191 to Hwy 128 takes around 90 minutes. The full loop, through Moab, is 64 miles.

The main vehicular route to the high country of the La Sal Mountains is along Geyser Pass Road, climbing to the eponymous pass (10,538 feet), between Haystack Mountain to the north and Mount Mellenthin to the south. In good weather all vehicles be able to drive at least part of the way, to a junction in a meadow at the upper end of Horse Creek, from where the pass, the start point of several trails (including to Manns Peak), is another 2.5 miles. This latter section is somewhat steeper and more uneven. Other good quality tracks reach Oowah Lake and Warner Lake (site of a campground), and these three provide access to the central section of the mountains. The next most used route is in the south, along La Sal Pass Road from Highway 46. There are also many 4WD tracks, some also used by hikers, and plenty of trails, generally well signposted. 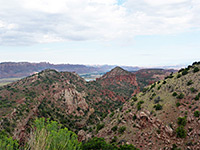 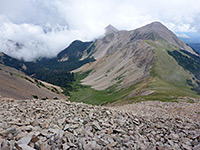 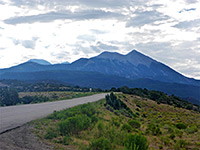 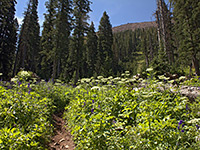