Highlights:
The destination for most visitors to Zion National Park - the spectacular canyon of the Virgin River, viewed along a ten mile scenic drive that passes towering red and white cliffs, and culminates in the Zion Narrows, where the river water covers all of the canyon floor
Location:
37.285, -112.947 (north end of the road)

Zion Canyon begins in the south at Springdale, a crowded but friendly little town with narrow streets and rather an excess of visitor facilities. There is a cheap RV site on the banks of the Virgin River, a small selection of hotels, and a variety of shops. The usual approach to Springdale is from the west, from St George via UT 9, a scenic road that runs beneath colorful cliffs of increasing height and follows close to the river for most of the way, passing a few locations where primitive camping is possible.

Shortly after Springdale, UT 9 passes the park visitor center and two more campgrounds (South and Watchman), and then reaches the junction with the Zion Canyon Scenic Drive, the main destination for visitors to Zion National Park. This road winds northwards along the east side the river for 8 miles beneath the massive rocks until the canyon narrows; beyond this, the paved and very popular Riverside Walk (formerly Gateway to the Narrows Trail) extends a further one mile north, ending at the point where the river first covers all of the canyon floor. To progress further upstream requires hiking in the river itself, via the famous Narrows Trail. Since 2000 private vehicles have not been allowed on the road because of overcrowding and inadequate parking, so instead a free shuttle system was introduced. Buses leave every ten minutes or so from the visitor center by the Watchman campground and stop at eight locations, traveling quite slowly and taking around 40 minutes for the journey to the end of the road at Temple of Sinawava. The drivers give a narration about sights along the way, a talk which is designed for the first time visitor, hence for regular hikers the journey can become rather tedious. A separate shuttle links the visitor center with five locations to the south, in Springdale.

Many of the most spectacular features of Zion Canyon can be seen either from the road or by walking on short paths to overlooks (or underlooks!), but the experience is often spoilt a little by the sheer number of visitors. Most of the viewpoints are of huge cliffs with religious-sounding names such as
Affiliate disclosure

Court of the Patriarchs (shuttle stop 3), The Pulpit and The Great White Throne, but there are also short paths leading to waterfalls, pools and the Virgin River. The major features were named by a Methodist minister, Frederick Vining Fisher, around the turn of the century. Other points of interest include Weeping Rock (shuttle stop 6), a seeping waterfall flanked by curtains of hanging vegetation, reached by a short path which continues up the cliffs to Hidden Canyon and Echo Canyon, two of the narrow side-branches of the main canyon. Facilities along the scenic drive are concentrated around Zion Lodge (shuttle stop 4), in a wide, wooded part of the canyon - this grand timber building (reconstruction of an older structure destroyed by fire in 1966) has 40 cabins, 6 suites and 75 regular rooms, plus a restaurant and gift shop. Other shuttle stops are The Grotto (no. 5 - a picnic area beside the river), Big Bend (no. 7 - a viewpoint in a narrow part of the canyon) and Temple of Sinawava (no. 8), where the road ends.

Sunset over the cliffs on the east side of Zion Canyon

The most popular trail in Zion Canyon is to the Emerald Pools - two picturesque ponds along a tributary stream a short distance along a side canyon west of the river. Rather more strenuous is the 1,500 foot ascent over 2.5 miles to Angels Landing, probably the best high viewpoint of the canyon, but also one of the most dangerous destinations in any national park, responsible for eight fatalities since 1983. On the opposite (east) rim of the canyon, Observation Point is reached by a longer but equally spectacular hike of 4 miles and 2,150 feet of elevation gain. One easier path starts right beside the Watchman Campground - the 1.4 mile Watchman Trail climbs a ravine to a fine viewpoint of the lower Virgin River valley. Apart from these, a variety of backcountry trails lead up the cliffs and along narrow canyons to remote, hidden places that allow for a more private and tranquil appreciation of the beauty of the park - destinations such as Cable Mountain, Deertrap Mountain and Telephone Canyon.

Trails - all trails in and around Zion Canyon

Angels Landing Trail
★★★★★
2.5 miles, 1500 feet
One of the most spectacular trails in any national park, the route to 5,785 foot Angels Landing climbs steeply up the cliffs on the west side of Zion Canyon for a panoramic view over the surrounding landscape

Emerald Pools Trail
★★★★★
1.5 miles, 350 feet
Another of the more popular paths in Zion Canyon is the route to the upper, middle and lower Emerald Pools - three pretty ponds beneath sheer sandstone cliffs 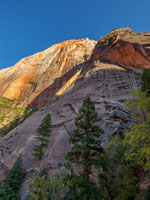 Hidden Canyon Trail
★★★★★
1.1 miles, 800 feet
The lower end of the cool, shady narrows of Hidden Canyon may be reached by a short though quite strenuous trail, part of which involves a traverse of a sheer cliff face with the aid of chains

Watchman Trail
★★★★★
1.4 miles, 450 feet
From the Zion Canyon Visitor Center near Watchman Campground, this path climbs into a small ravine then bends back westwards to a promontory overlooking the Virgin River valley

Weeping Rock Trail
★★★★★
0.25 miles, 60 feet
Weeping Rock is one of Zion's most photographed places - a curved cliff face that continually seeps water at the junction of two sandstone strata (the Kayenta and Navajo layers), sustaining a curtain of ferns, moss and wildflowers