Emerald Pools and the Kayenta Trail

Two popular paths climb a little way up the west side of Zion Canyon to three pretty pools, the uppermost set beneath sheer cliffs below the end of Heaps Canyon. Also gives good views up and down the main valley. Another route, the Kayenta Trail, leads north to an alternative starting point near the Grotto

Trailhead: Opposite Zion Lodge - shuttle stop 5, or at the Grotto, stop 6

Two easy trails, both just over a mile in length, start near Zion Lodge, half way along Zion Canyon, and head towards the mountains opposite, following a stream up past a seasonal sheet waterfall to the Emerald Pools; an intrinsically peaceful, secluded location though one sometimes over-visited. In summer large crowds climb up to the first of the pools, take a few photographs and hurry back down without seeing any of the smaller, more hidden ponds or the large mini-lake further up, at the foot of another, much higher waterfall. An alternative route to this location, somewhat less busy, is the one mile Kayenta Trail which approaches from the north, starting near the Grotto picnic area.

Water feeding the pools falls or seeps from two tributary ravines several hundred feet up, above a streaked vertical cliff - these are Heaps Canyon and Behunin Canyon, two of the most popular drainages in the park for technical canyoneering; occasionally, hikers may witness people rappelling down to the upper pool from the rim of the canyons above.

Narrow place on the Kayenta Trail

After crossing the Virgin River via a footbridge, the path from Zion Lodge splits into the two routes, leading to the lower and middle pools; the former is the most popular as the gradient is gentler and the trail more shaded, running beneath large cottonwood trees. This follows first the river then a tributary stream, ascending to a wide overhang beneath a curving cliff face, where, during wet weather, several elongated waterfalls flow from the pools above. The path passes behind the cascades, which create pretty rainbow-like light patterns if the sun is appropriately oriented, although the water flow dries up almost completely during summer. A short, brisk climb completes the 15 minute walk to the first pools (0.6 miles). The stream feeding them flows from the overgrown hillside beyond, through other sheltered, tree-lined pools and small waterfalls between a jumble of boulders. There is no path along this section, but scrambling up the streamway is easy enough. From the cliff edge in front of the lower pool, a fine view extends over the wooded Virgin River valley, and to such landmarks as Red Arch Mountain, the Great White Throne and Lady Mountain.

The canyon, near Zion Lodge

Rather fewer people continue to the upper pool - another half mile along a steeper, rockier trail with an additional 280 foot elevation gain. Beneath a high cliff of colorful, streaked Navajo sandstone lies a large pool, deep enough for swimming most of the year, a practice once allowed but now prohibited to protect water quality and aquatic life. During winter and spring a powerful waterfall cascades down the rock face though in summer this dries up completely. The majority of the water originates from Heaps Canyon, a long drainage with many narrow passages, waterfalls and deep potholes - probably the most demanding of Zion's technical slot canyons, this flows for 10 miles across the high country above, ending with a drop of 300 feet into the upper pool.

The other, higher elevation route to the pools from Zion Lodge (the Middle Emerald Pool Trail) starts, on the far side of the Virgin River bridge, by heading south alongside the river a short distance then forking west; straight on leads to the Sand Bench Trail. The route to the pools climbs quite steeply for a while, by about 150 feet, then levels out and stays fairly flat, traversing the cliffs towards the upper end of the side canyon.

A round trip along either of the Emerald Pools trails, including a visit to the upper pool, takes about 2 hours. An alternative approach is from the north along the Kayenta Trail, which starts close to the Grotto picnic area, on the west side of the Virgin River at a junction with the south end of the long West Rim Trail. The path rises gently to the top of a bench about 50 feet above the river then becomes level, moving across lightly wooded land that affords grand views of Zion Canyon and the Virgin River. The route then moves round a corner into the side canyon containing the pools, and ends at another junction; the right path climbs to the upper pools, while the left path - the end of the Lower Emerald Pools Trail - winds through a narrow, slot-like crevice between two huge rocks, then drops down beneath the overhanging cliff below the pools.

Trees beside the Virgin River, along the Kayenta Trail

Topographic Map of the Trails 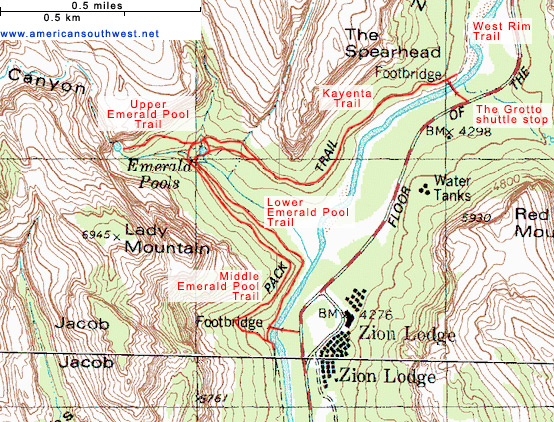 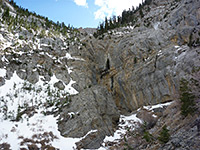 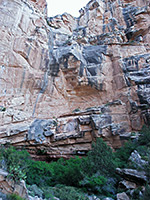 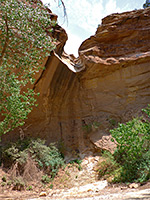 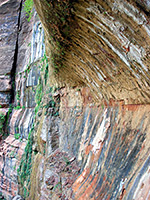