Like the nearby La Sal and Abajo ranges, the Henry Mountains are an isolated group of peaks in southern Utah, formed by igneous intrusions, forcing through the older, overlying sedimentary rocks of the Colorado Plateau, between 23 and 31 million years ago. The mountains are orientated approximately north to south, and the main section, towards the north, contains three principal peaks (10,723 foot Mt Hilliers, 11,371 foot Mt Pennell and 11,522 foot Mt Ellen), while to the south, separated by a strip of low, desert land, are two lesser summits, Mt Ellsworth (8,235 feet) and Mt Holmes (8,000 feet), together known as the Little Rockies.

The tops of the lower two peaks are covered only by scattered bushes and pinyon-juniper pines but the main area includes sizeable patches of forested land (fir, spruce, aspen and ponderosa pine), though the actual summits are treeless, with tundra vegetation. Most of the mountains are fairly smooth, lacking big rocky exposures; exceptions are some of the lower elevation slopes which do have more dramatic formations, of ridges, ravines and pinnacles, relics from the ancient upthrust through the sandstone layers.

Mount Ellen
Historically the Henry Mountains have always been isolated, and they were the last major range in the country to be properly mapped and explored - they are well away from any major settlements, cut off by the Colorado River (now Lake Powell) to the south, the Waterpocket Fold to the west and the Dirty Devil River to the east. Highway 276 runs below the east side of the major peaks and to the west of the Little Rockies, while many tracks cross the slopes of the northern group, most requiring a 4WD vehicle.

All this region is managed by the BLM, who maintain three primitive campgrounds, yet they remain very little visited, in part due to the rough access roads, and also perhaps because there are no specific attractions or major features, in contrast to the more accessible and more colorful rock formations that surround the mountains on all sides, including within Capitol Reef National Park and Glen Canyon NRA, while the desert east of the mountains is crossed by many narrow canyons, tributaries of Trachyte Creek, North Wash and the Dirty Devil River.

The Henry Mountains are also notable for the free-roaming herd of bison that lives here, one of only three in the country. The population is stable and thriving, though is not natural, having been established in 1941 after relocation of 18 individuals from Yellowstone National Park. The mountains are also home to antelope, mule deer, bighorn sheep, wild burros and mountain lions.

Map of the Henry Mountains.

The nearest town to the Henry Mountains is Hanksville, 15 miles north - from here Hwy 95 leads south, past the intersection with Hwy 276 to Halls Crossing, a junction which is near the mountains, about half way along. By far the most easy-to-reach of the three campgrounds is at Starr Spring, on the south side of Mount Hilliers - a good quality gravel road rises steadily by over 1,000 feet over 4 miles, past two junctions, to the campground, set amongst shady trees either side of a permanent stream, fed by dispersed springs a little way uphill. Like the other two campgrounds, the nightly fee is $10, and drinking water is available all year. Nearby are the photogenic remains of Starr Ranch, established by gold prospector Al Starr in the 1880s but abandoned after only ten years, in part because of drought, and partly to exhaustion of the gold ore. From the camp, a rougher track heads northeast to a junction along Hwy 276, while another loops all around Mount Hilliers, first leading west then north, climbing through Stanton Pass (7,385 feet) and linking with the 68 mile Bull Creek Pass Backcountry Byway, the main route into the high country. To the west this climbs towards Mount Pennell then veers north, past The Horn (a narrow, steep-sided volcanic peak), and across the southwestern slopes of Mount Ellen before rising again and crossing the summit ridge at the eponymous pass (10,485 feet), followed by a long descent to Hwy 95. Just before the highway junction are the red hoodoos of Little Egypt. Mounts Ellen and Pennell have other tracks towards the summits; only Mount Hilliers is less accessible.

The two other campgrounds are at McMillan Springs, along the byway to the southwest of Mount Ellen, also reachable by relatively good tracks from Notom-Bullfrog Road) and Lonesome Beaver, on the northeast side of Mount Ellen close to the day-use area of Dandelion Flat, both around 8,300 feet. These two locations are situated just north of the byway on a separate track that approaches from the north, accessible from several places along UT 95.

Suitably-equipped visitors can drive far into the main section of the Henry Mountains, but from many people the only easily-reached access point is Starr Spring, from where some of the upturned sandstone formations are within range of a day hike, and perhaps also the summit of Mount Hilliers - this is relatively close in distance (3.3 miles), though over 4,500 feet above, requiring testing route-finding up through several bands of cliffs. The two peaks of the Little Rockies are somewhat easier to explore, however, and accessible to all vehicles, since they are close to the highway. There are just a few short tracks climbing part way up the slopes, and no recognized trails, but the summits may be accessed by off-trail hikes; the route to the southern peak, Mt Ellsworth, is probably the easiest. In contrast the eastern slopes of the Little Rockies are very rarely explored since the ground breaks up into a series of deep, branched canyons, leading to Lake Powell.

25 views of the mountains 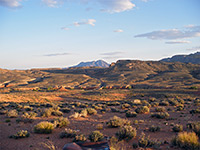