Highlights:
Narrow band of eroded formations of red and white Entrada sandstone; a small-scale version of the more famous Goblin Valley to the north. The ridges and hoodoos extend about one mile along the base of a low mesa, easily viewed by short hikes from the access track
Nearest city with hotels:
Caineville, 40 miles
Management:
BLM
Location:
38.080, -110.627
Seasons:
All year, though hot and exposed in summer
Rating (1-5):
★★★★★
Weather:

Entrada sandstone is exposed in many locations across the Colorado Plateau, often eroded into interesting shapes; this rock is responsible for several famous landscapes including the arches of Arches National Park, the hoodoos of Goblin Valley and the red outcrops of Kodachrome Basin. 35 miles south of Goblin Valley is a similar but less well known location, free to enter, known as Little Egypt owing to the desert-like sands and shapely red formations. Here, the sandstone is exposed in quite a narrow band beneath the east edge of a low mesa, and for just over one mile it has been eroded to create many little pinnacles and ridges, mostly all red though made more interesting in some locations by a band of white - similar to Blue Canyon in Arizona, though the rocks are different. The location is managed by the BLM as the Little Egypt Geological Area.

The band of formations at Little Egypt is orientated approximately north to south, along the base of the mesa to the west, and is about 300 feet across. To the east, the land is flat and empty, and the rocks are best viewed in the morning; in late afternoon the sun sinks below the mesa so the area is mostly in shade. The rocks are generally brownish red rather than deep red, and may not appear so colorful in the harsh light of midday; they look better with some shadows, to aid definition. Not all of the exposed rocks are distinctive, and it may take some time to locate photogenic formations; the best are a little way east of the base of the cliffs, where small groups of hoodoos have been left in isolation, surrounded by sandy flats.

Little Egypt is reached by driving just over a mile along a good quality, unpaved track forking west off Hwy 95, 20 miles south of Hanksville and 5.7 miles north of the Hwy 276 junction. Just opposite is a lesser track, leading to the narrows of Poison Spring Canyon. The main track is not signed to Little Egypt, instead to the Bull Ranches, several miles away in the foothills of the Henry Mountains; it is also the northernmost section of the 68 mile Bull Creek Pass Backcountry Byway, the south end of which is near the Trachyte Creek crossing of Hwy 276. The road descends to a clayish area near the foot of thin-layered cliffs, then turns south, reaching a sign for the Little Egypt parking area after 1.5 miles - on a little plateau just above a stony wash, with the cliffs and hoodoos stretching out ahead, to the west. This is near the north end of the formations, which extend about one mile south then southwest, and the far end may be accessed by an unsigned turn-off further along the track (2 miles), just before a wash crossing. Much of the limited traffic on the track is for the ranches rather than to Little Egypt.

The largest hoodoo at Little Egypt

The area is relatively quick to explore going to the narrowness of the eroded formations. In a few places the mesa edge is cut by short ravines but mostly the cliffs are straight and unbroken. The lower rocks are fairly homogenous in texture, all red apart from the white bands, while those above are a little more varied, generally less eroded but containing a few interesting formations including the biggest hoodoo in the area, this at the head of a little ravine 0.3 miles west of the main parking area though out-of-sight from it. The best area, with the isolated hoodoos, is between the two parking areas. Despite the generally dry, exposed surroundings, the place has a good selection of wildflowers in spring, including a few species endemic to the Colorado Plateau. There are plenty of good, free primitive camping spots in the vicinity. 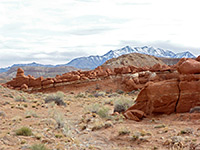 Nearby places
Similar places
Blue Canyon, Arizona - red and white formations in a remote area of the Hopi reservation