Relatively few people visit Goblin Valley State Park, which is a pity since the eroded sandstone formations are every bit as beautiful as the more famous Utah national parks further south, although on a much smaller scale. The park lies at the edge of the vast San Rafael Desert, 12 miles from the small village of Hanksville but far from any town of significance, and is reached along a turning off UT 24 after 11 miles of newly paved road on which it is possible to travel at 60 mph along the flat, but nearer 20 mph along some of the winding sections.

The valley, which is only about a mile across and two miles long, is formed by a seasonal wash (Red Canyon) and contains thousands of mushroom-shaped pinnacles or hoodoos a few feet high that someone obviously thought resembled goblins - the formations have large orange-brown boulders of hard rock atop weaker sandy layers which have eroded more quickly, as a result of millions of years of the combined effects of wind and rain. The park is easy to explore, by walking along one of three maintained paths, or just hiking off-trail over the level ground between the formations.

Map of Goblin Valley State Park and Nearby Canyons

After the entrance station, the road to the viewpoint and trailhead passes the upper ends of two short slot canyons, winding towards a distinctive, isolated group of three hoodoos on top of a narrow ridge, surrounded by the flat, grassy land that extends many miles eastwards.
Affiliate disclosure

The canyons are shallow but narrow for a few hundred feet, with nice rock forms and reflected light patterns. The road leads to an elevated parking area with covered picnic tables, looking out over the widest (northernmost) part of Goblin Valley, which is bordered on the west side by undulating badlands, rising up to a tall mesa, and to the east by a narrower, steep-sided escarpment formed of eroded layers of grey-white and red-brown sandstone. Most people just walk a short distance around the closest part of the valley though this area is not the most interesting as in general all the hoodoos are similar in size and shape; the formations are more varied to the southeast, beyond an intervening ridge, where a side ravine joins from the east. The goblins are taller, closer together and have more complex forms, especially around the head of the ravine on top of the escarpment, and on the far side, where a vast, steep-faced bowl contains thousands of hoodoos, some merged with the cliffs to create an eerie skeletal structure with distorted skull-like rocks and transverse bony ridges. From the top of the ridge (which completely hides the valley from highway UT 24 a few miles east) are great views over the San Rafael Desert, mostly flat and empty apart from scattered buttes and mesas.

Isolated line of hoodoos, near the entrance to the valley

Beside the normal rounded, vertical shapes, the rocks along the side ravine also form horizontal hoodoos, short caves and small arches, yet despite this variety, the colors remain the same red-brown all across the valley apart from a few bright green bushes along the dry washes, so the place is perhaps not quite as good as some other eroded landscapes like Bisti or Ah-Shi-Sle-Pah in New Mexico, which show a greater range of colors. The land on the west side of Goblin Valley has sand dunes, mud hills, twisting ravines and smaller, more scattered hoodoos, while further south, after another ridge, are more pockets of formations, extending over 2 miles from the parking area. All the hoodoos are composed of Entrada sandstone, a cream colored rock found in several other nearby locations, most prominently in Arches National Park. The contrasting gray-white rock making up the top layers of the cliffs around Goblin Valley is the Curtis Formation.

Red goblins, on top of the cliffs at the east edge of the valley

It may not take long to see Goblin Valley - an hour is enough to walk to the northernmost section - but the park is certainly well worth a detour. The rocks are especially striking at dusk and for anyone wishing to stay the night, camping is available at an official site ($30 per night in 2020, maybe a little overpriced) which is situated on a hillside a few hundred yards away from the main valley and out of sight of the formations, though it does have a few welcoming goblins of its own. The campground offers 25 sites (and two luxury yurts), hot showers and drinking water, while other park facilities are a small visitor center and a picnic area. The nearest places for free camping are along the unpaved Wild Horse Road, forking west just north of the state park boundary, or around the junction of the entrance road with Temple Mountain Road. The day use fee for Goblin Valley State Park is good value at $10. In 2015, the park instigated the Wild Horse Mountain Biking Trail System, five connected loops totaling 7 miles, across a previously little-visited region in the northwest corner of the park, away from the goblins. Most passes over relatively flat land of plains, washes and small hills, within sight of several ridges and peaks, including Wild Horse Butte to the north.

The land immediately west of Goblin Valley State Park is part of the San Rafael Swell, and like much of south Utah it is remote but beautiful, and traversed only by a few dirt tracks, although 4WD vehicles are generally not required. There are various slot canyons in this area and some such as Little Wild Horse Canyon are both quite well known and may be explored relatively easily. 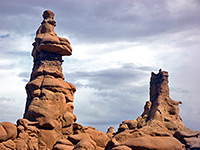 East edge of the valley