Highlights:
Very remote and spectacular wilderness area alongside the Rio Grande, subject to extreme heat most of the year. A mix of desert, canyon and mountain landscapes, with many and varied desert plants and wildlife. Park is crossed by a few roads and many trails; main regions are Chisos Mountains and the north, the southeast and the southwest
Nearest city with hotels:
Alpine, 98 miles
Management:
NPS
Location:
29.328, -103.205 (Panther Junction)
Seasons:
All year, though temperatures are very hot in summer
Rating (1-5):
★★★★★

Chisos Mountains and the North
Dramatic mountain range at the center of the park; cooler conditions in summer, and many trails

The Southeast
Arid region of low desert, and two large canyons along the Rio Grande (Boquillas and Marsical), plus the visitor center of Rio Grande Village

Hiking - descriptions of all trails in the park

Surroundings - approach roads, distances and places of interest in the vicinity 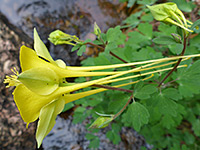 Photographs and descriptions of flowering plants found in the national park
Few US national parks are as remote as Big Bend - the two main northern entrances are both over an hour's drive from any mainstream town, and the nearest major city is El Paso, 300 miles west. Yet despite the isolation, visitation has been steadily increasing in recent years as more people learn about the fantastic mixture of desert, mountain and river canyon scenery within and around the park.

The dominant feature of Big Bend National Park is the Rio Grande, the course of which runs generally northwest from the Gulf of Mexico but takes a long diversion south of several mountain ranges before turning back north towards New Mexico; the national park sits in the lower part of this 'big bend', adjacent to the international border. Three major canyons fall within the park boundary; Santa Elena, Marsical and Boquillas, between which the river flows through desert land that is wild and largely unreachable.

Chisos Basin
North of the Rio Grande the park is mostly arid and rocky with only limited access by paved roads, a part of the great Chihuahuan Desert that extends across much of north Mexico into the southwest corner of Texas. Plant life is particularly varied and plentiful, with over 60 species of cacti plus many other spiky plants. Landscape features include narrow canyons, colorful badlands, eroded rock formations, sand dunes, desert plains, dry washes and oases. Two major roads cross the desert areas of the park, one heading southwest, the other southeast.

One prominent exception to the arid desert, and for some people the main reason to visit the national park, are the Chisos Mountains, a huge, angular range of cliffs and rocky peaks rising to 7,825 feet. In these tree-covered slopes the hot desert lowlands are far away and many trails give access to a cool, sheltered world, inhabitants of which include black bears and mountain lions. Facilities are concentrated in Chisos Basin, sheltered on all sides by high cliffs, and include a lodge, restaurant, gift shop and campground.

Blue Creek Canyon
★★★★★
1.5 miles, 240 feet
A disused but well preserved ranch building and a group of pointed red rock formations are the two attractions lower section of the trail along Blue Creek Canyon

Boquillas Canyon
★★★★★
0.7 miles, 40 feet
The entrance to Boquillas Canyon, one of the three great river gorges within Big Bend National Park, can be reached by a short trail that climbs over a ridge then passes through a riparian area close to the Rio Grande, ending at a pebbly beach

Burro Mesa Pouroff
★★★★★
0.5 miles, 50 feet
This well used path to a narrow pouroff crosses sandy ground then follows a dry wash to the base of the cliffs

Cattail Falls
★★★★★
1.5 miles, 360 feet
Beautiful, hidden waterfall above a series of pools, in a wooded canyon on the west side of the Chisos Mountains

Hot Springs
★★★★★
3 miles, 250 feet
The Hot Springs alongside the Rio Grande can be reached either by a gravel track (not for RVs), leaving Hwy 118 a few miles from Rio Grande Village, or by a pleasant 3 mile trail, crossing desert land with many and varied cacti, and frequent views of the river gorge

Lost Mine
★★★★★
2.4 miles, 1200 feet
From a pull-out along the Chisos Basin Road near Panther Pass, this often busy trail climbs a tree-covered hillside and a bushy ravine to a narrow ridge separating the upper ends of Juniper Canyon and Pine Canyon

Marufo Vega
★★★★★
14 miles, 1000 feet
Perhaps the most difficult day hike in Big Bend, the Marufo Vega loop trail crosses hostile, mountainous terrain, exceedingly hot and dry during the summer months, and descends steeply down a canyon to the banks of the Rio Grande

Oak Spring
★★★★★
2.3 miles, 950 feet
Connecting path between the Window at the edge of the Chisos Mountains, and the desert lowlands to the west

Santa Elena Canyon
★★★★★
0.8 miles, 40 feet
Santa Elena is most spectacular canyon in the national park, formed as the Rio Grande cuts through the 1,200 foot cliffs of Sierra Ponce

Upper Burro Mesa Pouroff
★★★★★
1.8 miles, 200 feet
Route along a shallow valley, and later an enclosed and rocky canyon, to the brink of a high dryfall

Ward Spring
★★★★★
1.6 miles, 450 feet
Lightly used trail, mostly across open terrain, to an overgrown spring in a shallow ravine. Many types of cacti and wildflowers along the way

Window
★★★★★
2.2 miles, 560 feet
Popular path in the Chisos Mountains, down an increasingly deep and overgrown ravine to a narrow rocky section with small pools, preceding a big pour-off

Hotels in the Big Bend region are few and far between. Small places like Presidio and Lajitas have a few motels, but better standard chain hotels are found only in towns much further away: Alpine (98 miles), Fort Stockton (125 miles), Pecos (177 miles) and Van Horn (198 miles) - distances are to Panther Junction.