Highlights:
Many square miles of black, twisted lava and other volcanic formations including craters, cinder cones and lava caves, in high elevation land near the continental divide. Bordering the lava are sandstone cliffs and wooded hills. A little-visited area with much scope for backcountry exploration
Nearest city with hotels:
Grants, 15 miles (from the information center along Hwy 53)
Management:
NPS
Location:
34.993, -108.036 (visitor center)
Seasons:
Spring, summer and fall are best; heavy snow in winter
Rating (1-5):
★★★★★
Weather: 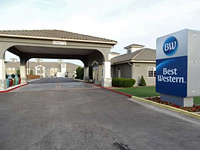 One of a group of Grants hotels around the central I-40 junction, adjacent to a restaurant & supermarket, and half a mile from the national monument visitor center

All hotels in Grants - Affiliate disclosure
There is much evidence of past volcanic action in New Mexico, including Capulin Volcano in the northeast, several lava plugs - inner remnants of ancient volcanoes - near Shiprock in the northwest, and large lava fields around Carrizozo, south of Socorro and south of Grants, together with various smaller areas. The deposits near Grants are the largest, and most are contained within El Malpais National Monument, a relatively little-visited preserve to which entry is free and facilities are somewhat limited, to one extended trail, three shorter loop trails and a few overlooks, though there is much scope for off-trail, backcountry exploration.

Lava fall
The lava covers an area of 60 by 35 miles; interstate 40 crosses the northern margin, location of the visitor center, but the scenery is much better viewed from NM 117 which heads south from I-40 exit 89, right along the edge of the twisted black rocks which stretch westwards to the horizon. The far side of the monument is reached by NM 53 starting at exit 81 of the interstate, also running next to the lava for a while before moving away to the west as the land becomes more hilly (sloping up to the continental divide) and wooded; most of the western parts of the monument are only accessible by unpaved forest tracks. El Malpais National Conservation Area is a separate preserve with slightly less regulation that encloses the national monument on most sides and also contains volcanic remnants, together with sandstone cliffs, mountains and forests.

The El Malpais lava beds were produced from eruptions of several volcanoes up until about 800 years ago; they have since been gradually covered by scattered trees, bushes, cacti and grasses, making the vista slightly less impressive than for example the Sunset Crater region in Arizona, which is much more black, although large areas of El Malpais are still devoid of vegetation. Numerous cinder cones and small craters are found within the national monument, mainly along the western edge. The patterns of the molten lava are still easily recognised - from large blocky flows many feet high (aa) to small ripples (pahoehoe) at the edge of the lava course.

There are several paths that cross the lava field although the routes are not obvious and are marked only by cairns of lava fragments at intervals. The only maintained path is the seven mile Zuni-Acoma Trail, an ancient Indian route which crosses the lava between NM 117 and NM 53. The rock is very sharp and brittle so walking
Affiliate disclosure

off trail needs care as the lava often has fissures several feet deep as well being generally unstable. Below the generally black surface, the rock has lighter, reddish-grey colors, due to a longer cooling time and less exposure. Apart from the two trailheads, there are three other entry points for exploring the lava; the most interesting but hardest to access is the Big Tubes area, near the west edge of the lava flow, which has several huge lava caves both intact and partially collapsed. Such caves are formed when a solidified rock crust formed above still-flowing currents of lava underneath; this lava later drained away, leaving an empty tunnel, some of which can be many miles long and contain ice all year. Along NM 53, the El Calderon region is toured by a 3 mile loop trail, which passes a crater, a cinder cone, a lava trench and several caves, while in the southeast along NM 117, the Lava Falls region includes some of the most recent flows in the monument, with a variety of different volcanic features. One other section of the flow is privately owned; the Bandera Crater region in the northwest, where a large ice cave can be visited, set in thick lava deposits at the foot of a symmetric, 800 foot high crater.

Hoodoo at the Sandstone Bluffs

The great lava plain is bordered to the east by a long escarpment of buff-colored Dakota sandstone, with cliffs up to 400 feet high; NM 117 runs right along the base for 15 miles, rising slightly in one stretch and crossing an intermediate plateau, where a 1.7 mile side road leads to the Sandstone Bluffs Overlook, an excellent viewpoint both of the main line of cliffs to the east and the lava to the west. The rocks form a few hoodoos and other interesting formations, and have a slightly pinkish hue; it is worth exploring along the rim for half a mile or so north of the viewpoint. One well-known natural landmark along the highway is La Ventana Natural Arch, the largest in New Mexico, which has formed in a bend in the sandstone cliffs that flank the lava to the east. It is clearly visible just west of the road about 20 miles south of I-40, and a short trail leads directly underneath. South of the lava flow, the little-used road continues across flat, rather featureless and uninhabited prairie for a further 40 miles, until the land starts to become wooded and mountainous.

Lava Falls
★★★★★
1 mile, 50 feet (loop)
Cairned route across the edge of a relatively young lava flow, past a variety of volcanic features including a small lava fall