Highlights:
Great assortment of volcanic features, in a particularly remote area of far north California - the monument includes cinder cones, craters, lava fields, and over 400 lava caves
Nearest city with hotels:
Klamath Falls, 40 miles
Management:
NPS
Location:
41.711, -121.505 (visitor center)
Seasons:
All year; winter snowfall is relatively light, though it may close the roads and trails for a while
Rating (1-5):
★★★★★ 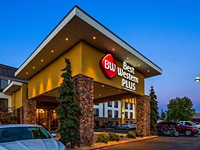 All hotels in Klamath Falls - Affiliate disclosure
Few places in California are further removed from the deserts of the south than Lava Beds National Monument - about a 15 hour drive from San Diego, it lies in an empty and relatively unknown region of wooded hills and grassy prairie, east of the Cascade Range and some distance beyond the north end of the Sierra Nevada. The national monument contains large areas of jumbled lava flows, last deposited as recently as 2,000 years ago, mixed with a variety of volcanic features including cinder buttes, spatter cones, chimneys, craters and especially lava tube caves, of which over 400 have been discovered so far.

The surrounding countryside also has craters and extensive patches of lava, continuing east to the Cascades and south towards Lassen Volcanic National Park, all associated with the same tectonic system. Apart from the caves, the features are not quite as dramatic as other locations like Lassen and Arizona's Sunset Crater, but their impact is increased by the general remoteness of the surroundings.

Only one major road passes by Lava Beds National Monument, on the northeast side, though unpaved tracks do approach from the west, the direction from which most visitors originate. The main road is CA 139 which links CA 299 near Alturas with Klamath Falls over the border in Oregon, and from this route a 40 mile scenic drive runs across land of the Modoc National Forest into the center of the lava fields, which lie just south of Tule Lake National Wildlife Refuge, an important resting place for migratory birds. The national forest covers a large area of the far north of California, and many tracks criss-cross the hilly terrain; a good route from the west starts at Macdoel on US 97 and winds through peaceful farming communities in Red Rock Valley then enters the pine forest, passing various lava flows and crosses the national monument boundary from the south, joining the scenic drive near the visitor center.

There are many good places in the surrounding national forest suitable for free primitive camping, though most people opt to stay at the NPS campground (Indian Well), just across from the visitor center - this has 43 sites, most of which can be accessed by small to medium RVs, up to 30 feet in length. Two trails start at the camp, a lengthy route to the east, into the Schonchin Wilderness, and a shorter connecting path to the west, to Skull Cave. Other trailheads are found along the main road and at the end of short spurs, leading to caves, cinder cones, scenic overlooks and lava flows. Day use areas, with picnic facilities, include the Fleener Chimneys (a group of spatter cones) and Captain Jack's Stronghold, an area of lava deposits that was used as a refuge by a local chief during the Modoc war of 1872-1873.

Pictographs on a boulder