Hiking
Details of all trails in the national park, starting along Hwy 89 and at Butte Lake, Warner Valley and Juniper Lake. Featured trails are listed below 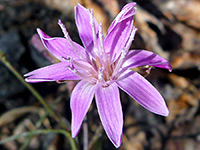 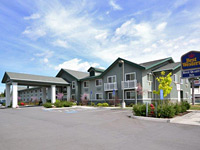 The closest hotel to Lassen Volcanic National Park; 50 comfortable guest rooms in the center of Chester, close to a good selection of restaurants

Hotels in Chester - Affiliate disclosure
Lassen Peak was originally a side-vent of a much larger volcano, posthumously named Mount Tehama, that exploded with huge force many thousands of years ago leaving a ring of hills some 3 miles across. Lassen itself has erupted several times, most recently after a violent explosion in 1915. Contemporary volcanic activity continued until 1922, by which time the mountain and surrounding area had become part of the Lassen Volcanic National Park. Lassen is the world's largest volcano of the plug dome type, and is visible for many miles across north California, rising 1,000 feet higher than any other nearby summit.

In the 60 years since the last disturbance, the land close to the volcano has largely recovered but much evidence of the destruction remains, and the national park has many fascinating geothermal features including mud pools, hot springs and gas vents. These occur mainly in the area once occupied by Mount Tehama, but are also found at locations of other ancient volcanic eruptions; major locations are Boiling Springs Lake, Bumpass Hell, Devils Kitchen and the Sulphur Works. They form part of an impressive mountainous landscape, partly forested, also containing steep glaciated valleys, cliffs, lakes and waterfalls, together with several other volcanic domes and ancient lava fields.

Cluster Lakes Trail
The national park is 200 miles from San Francisco, in a sparsely-populated, hilly area north of the Sierra Nevada mountains, officially part of the Cascade Range that extends north all the way to British Columbia. Two major east-west roads, CA 44 and CA 36, pass either side of the park and intersect with CA 89 which winds through the western section, passing close to most of the major features. This is the only paved access route although several gravel tracks lead to sites in the more remote eastern section, including Butte Lake and Warner Valley. Most visitors approach from the south and drive only a few miles from the entrance to view the nearby thermal areas, but it is well worth continuing the whole way across the park to get a better appreciation of the varied landscape. This scenic drive takes about 90 minutes excluding stops. The park also has a fine network of hiking trails.

Kings Creek Falls
Lassen is one of the most unusual places in California, yet is relatively little visited, partly because it is a long way from most other famous natural attractions in the state. Also, access is restricted due to the heavy snowfall that this area receives - the park may be fully open for only 3 months of the year though is at least partially accessible in any month. It is amazing to visit when the road is being ploughed after a hard winter as although the machines leave the surface clear, the vertical walls of snow at either side may tower many feet above, enclosing the road in a dazzling white canyon.

Bumpass Hell
★★★★★
1.5 miles, 300 feet
Although unspectacular by Yellowstone's standards, Bumpass Hell is the largest thermal area in Lassen, and in summer many visitors walk the easy trail to the basin

Butte Lake and Cinder Cone
★★★★★
1.5 miles, 850 feet
Cinder Cone is a well preserved volcanic peak, symmetrical in shape, black in color and completely lacking in vegetation - a highlight of the national park yet one that few people see owing to its isolated location

Cluster Lakes Loop
★★★★★
11 miles, 800 feet
A long loop in the center of the park, passing 13 lakes and ponds; through thick woodland, some burnt by a recent wildfire. The terrain is mostly level or only gently sloping. Some lakes can be seen by a shorter hike

Kings Creek Falls
★★★★★
1.5 miles, 500 feet
The 40 foot waterfall on Kings Creek is a popular destination, suitable for families with children

Lassen Peak
★★★★★
2.4 miles, 1957 feet
Beginning at an already high elevation of 8,500 feet, the well defined trail up the south face of Lassen Peak gains another 2,000 feet as it switchbacks across a steep slope of stones and lava blocks to the wind-swept summit

Mill Creek Falls
★★★★★
1.5 miles, 300 feet
The highest waterfall in the national park (70 feet) is reached by an easy trail that descends gradually through woods and floral meadows

Ridge Lakes
★★★★★
1 miles, 1045 feet
Starting from the parking area next to the Sulphur Works, the short but steep Ridge Lakes Trail ascends a partly wooded hillside to the two interconnected Alpine lakes

Terrace, Shadow and Cliff Lakes
★★★★★
1.8 miles, 700 feet
Three of the prettier lakes in Lassen Volcanic National Park may be accessed from the same trail; Cliff Lake is the most scenic, set beneath the north face of Reading Peak