Roads and Sites
Places to see along the main roads through the national preserve, including Shadow Valley, Cima, Kelso, Ivanpah, Black Canyon and Granite Pass
Coronavirus update (February 19, 2021): Visitor centers remain closed, but all roads, campgrounds and trails in the Mojave National Preserve are open

The Mojave Desert may have a reputation as being a hot, rattlesnake-infested sandy wasteland, but it contains numerous particular places of interest, and the vast open spaces have a special, stark beauty of their own, which has to be experienced in person to be fully appreciated. Despite the apparent emptiness, quite a lot of the land is put to use; there are four huge military bases, up to 50 miles in extent, and scattered but extensive habitation in the area west of Barstow. What remains is not just sand dunes and inhospitable mountains, but also ghost towns, volcanic craters and lava, historic sites and buildings, various other unusual geological features and even a diverse range of wildlife.

The Mojave often seems timeless, unending and indestructible, but some parts are threatened by a variety of developments including expansion of the army reservations, mining, land-fill rubbish dumps and new housing construction. The most unspoilt and unpopulated region is the East Mojave, and a large expanse between I-40 and I-15 containing much scenic and unusual terrain has been protected for many years as a National Scenic Area.

The land was redesignated a National Preserve following the California Desert Protection Act of 1994, a move which in theory affords the land greater protection, but has met with mixed responses owing to the possible detrimental effects of the likely increase in visitation and publicity, though the preserve remains lightly traveled compared to the nearby Death Valley and Joshua Tree national parks. More of the desert was protected in 2016 by creation of Mojave Trails National Monument, which links Joshua Tree with the national preserve.

Various types of roads cross the 1.6 million acres of the Mojave National Preserve; many are unpaved and lead to old settlements, springs, water wells and dozens of mines, some still in use but most long disused. Main (paved) routes into the area from the north leave from three I-15 exits; the Kelbaker, Cima and Morning Star Mine roads, the latter two of which converge at Cima, from which a good quality road continues to an intersection with Kelbaker Road at Kelso, then proceeds further south and eventually meets I-40 at the southern edge of the preserve. All routes pass many points of interest, and the journey from I-15 along any of the three makes a great drive of 2 hours or so. The route initially on Morning Star Mine Road also forms part of the shortest drive from Las Vegas to Palm Springs. The main visitor center for the preserve is at Kelso, occupying an old railway depot, but the greatest concentration of facilities (campgrounds and trails) are in the Hole-in-the-Wall region further east, reached by a paved road from the south or good quality unpaved routes from the north. For hiking, there are few maintained trails though opportunities for cross-country exploration are almost limitless.

Teutonia Peak
★★★★★
2 miles, 700 feet
The trail to Teutonia Peak passes a Joshua tree forest and an old silver mine then climbs a narrow ridge to a granitic summit 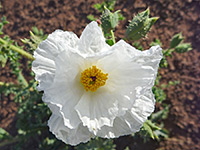