Highlights:
Mountains, valleys and plains at the transition between the Sonoran and Mojave deserts; the western half of the park features magnificent forests of the Joshua tree, plus many cacti, set amongst large outcrops of weathered granite boulders. Many trails, long and short
Nearest city with hotels:
Twentynine Palms
Management:
NPS
Location:
34.078, -116.036 (north entrance) 33.674, -115.801 (south entrance)
Seasons:
All year, though summers are very hot
Rating (1-5):
★★★★★
Weather:

The West
Scenic drives and places to see in the west, the most visited section of the park; many Joshua trees, plus mountains, rock formations, campgrounds and trailheads

The East
Roads and viewpoints in the lower elevation areas of east, where the land is generally emptier, with fewer Joshua trees. Trails lead to summits, old mines and palm oases

Hiking
Index of all major trails in the park, from 0.2 miles to over ten miles. Featured trails are listed below 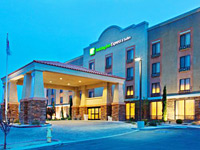 All hotels in Twentrynine Palms - Affiliate disclosure
Joshua Tree National Park is popular with the more thoughtful traveler, since there is no spectacular central attraction as is the case with many other Southwest parks, just many square miles of wild, unspoilt desert scenery. Two factors make the park special; the eerie, spiky Joshua trees which grow densely in the western half, and the extensive outcrops of huge granite boulders, up to 100 feet high, which line the mountain ranges scattered over the whole area.

Other prime attractions are six oases where California fan palm trees grow in their natural surroundings, all reachable by trail. This is not a place just to drive through, instead visitors should explore for a while away from the roads - climb some rocks or walk amongst the trees and cacti, but most of all spend a night here and watch the sun set. The Joshuas are especially atmospheric and spooky at dusk, when their stark, irregular outlines become quite menacing.

Alcove view
Joshua Tree, for many years a national monument, was promoted to a national park in 1994, along with nearby Death Valley, and was extended by 230,000 acres, mainly remote mountainous regions at the south and east edges. The land lies at the transition between the Sonoran and Mojave deserts, and has vegetation and scenery representative of both. Besides the trees, rocks and oases, the park also has many hiking trails, a network of 4WD routes, several historic sites and half a dozen picturesque campgrounds.

The national park can be reached from the south from a junction of I-10, or from the north by two roads that fork off CA 62, starting from the towns of Joshua Tree and Twentynine Palms - see area map. But the best approach, if applicable, is the westward drive along CA 62 from Parker in Arizona, 108 miles away. This follows the Santa Fe railroad for a while, then crosses empty lands typical of the Mojave Desert, past sand dunes, dried lake beds and rugged mountains, en route to Twentynine Palms. Near the town, on both CA 62 and the parallel Amboy Road are found many unoccupied and/or derelict buildings, at quite widely-spaced intervals over a distance of several miles, which give the whole area a rather sad, mournful air, especially near sunset.

Contact Mine
★★★★★
1.8 miles, 700 feet
Mine relics including sealed shafts and iron equipment, at the end of an unmaintained trail up a sandy wash and over stony slopes

Fortynine Palms Oasis
★★★★★
1.6 miles, 300 feet
This relatively easy and quite popular path climbs to the top of a barren ridge overlooking the town of Twentynine Palms then drops down to a sizeable group of California fan palms

Lost Horse Mine
★★★★★
2 miles, 480 feet
On the road to Keys View, a side track branches westwards ending after a mile at a small parking area at the edge of 5,178 foot Lost Horse Mountain, from where a trail (also once a vehicle track) ascends to the summit, en route passing several restored buildings from the Lost Horse Mine

Panorama Trail
★★★★★
8.6 miles, 1,180 feet (partial loop)
The Panorama Trail loops round part of the Little San Bernardino Mountains in the west section of the park, and may be combined with two spur trails to make a varied half day hike

Pine City and Desert Queen Mine
★★★★★
4.5 miles, 350 feet (loop)
Varied loop past two groups of old mine relics, along a canyon and across open flats to a shallow basin with huge boulders and pine trees

Pinto Mountain
★★★★★
4.5 miles, 2,200 feet (loop)
Mostly off-trail hike across sandy flats and up a ravine to an isolated summit in the north-central area of the park

Queen Mountain
★★★★★
2 miles, 1100 feet
From the end of a side road across Queen Valley, a little-used trail climbs the steep southern slope of Queen Mountain, ending at an elevated viewpoint near the summit

Rattlesnake Canyon
★★★★★
1.2 miles, 400 feet
A faint path enters the lower end of Rattlesnake Canyon, near the Indian Cove campground, and follows the narrow drainage into the north section of the Wonderland of Rocks

Ryan Mountain
★★★★★
1.5 miles, 1060 feet
Ryan Mountain is a somewhat isolated yet easily reached peak surrounded by open plains so the views from its summit are some of the best in the park 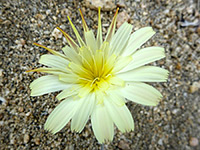