Varied loop, off-trail for a short section, past two groups of old mine relics, along a canyon and across open flats to a shallow basin with huge boulders and pine trees. The basin is good for exploring; other sites in the vicinity include an old townsite and a spring

Type: Loop. Pine City and the mine can also be visited by separate, one-way hikes

Usage: Medium to the mine, low to other locations

Trailhead: Parking area at the end of the unpaved Desert Queen Mine Road

A smooth, sandy track leaves Park Boulevard a short distance west of Jumbo Rocks Campground in the middle of Joshua Tree National Park, crossing a forest of well-spaced Joshua trees and ending after 1.3 miles at the trailhead for two short paths, to contrasting destinations; Desert Queen Mine and Pine City. The former consists of various ruins, relics and sealed shafts, on the slopes of a branched, steep-sided canyon, while the latter is a shallow, sheltered basin where pinyon pine trees mingle with the familiar rounded monzonite boulders found all over the western section of the national park.

The sites are usually visited by separate, one-way hikes, of 0.8 and 2 miles respectively, but both may be seen on a partial loop of 4.5 miles, off-trail for a short section, which additionally visits some other old mine relics and a long disused camp site. Desert Queen Mine is a popular destination, Pine City less so. The surrounding hills and plains are particularly good for wildflowers in spring and summer, and the rocky slopes are home to many types of cactus.

14 views of Pine City and Desert Queen Mine.

The side track to the trailhead leaves the main road on the eastern edge of Queen Valley, a wide, flat expanse of sandy land dotted with many Joshua trees. The area around the junction is carpeted by hundreds of flowering plants in summer, most noticeably purple desert sand verbena. Another road forks left after 1.2 miles, crossing the valley, past the trailhead for Queen Mountain, then on towards Barker Dam and Hidden Valley, while the other branch ends soon after at the Desert Queen Mine trailhead, which has space for about a dozen vehicles. The less used path to Pine City heads northwards, while the route to the mine is east; this crosses whitish, sandy terrain, intensely hot in summer, and reaches a junction after a few hundred feet, left being a spur to a viewpoint of the mine. The right branch winds down the hillside, past a ruined stone cabin to the floor of a sandy wash, then up the far side a little way to some of the mine emplacements. Relics include shafts and adits (all securely sealed), spoil heaps, and several iron objects. Though much less used, the path does continue beyond the mine, through hilly land for 1.5 miles to the parking area at Split Rock.

Mines to the North

The loop to Pine City continues by hiking down the wash, which is mostly sandy but has a few big boulders at intervals, to the junction with a smaller tributary ravine, on the west side. Upstream, this gains height gradually, while remaining not too overgrown, though rockier than the main drainage. After a while, more shafts and spoil heaps can be seen about 100 feet up on the eastern slope, reached by a short uphill scramble. Points of interest here include a wide, sloping shaft covered by railings and iron mesh, and a number of smaller, test holes. Cacti are very abundant, making up an unusually high percentage of the vegetation - species include two types of echinocereus, opuntia chloratica, red-spined ferocactus cylindraceus and two types of cylindropuntia (cholla). The rocks are noticeably mineralized, many containing flecks of blue ore.

Hills and valleys near Desert Queen Mine

The next part of a hike is a long an old track - once the mine access road, now faded and difficult to follow in some places. It rounds the far side of a low summit, drops down slightly across the upper end of the drainage, then rises a little to the site of a camp used by the mine workers, situated on a ridgetop overlooking Queen Valley to the west. Here are found several bed frames, other iron equipment, rusty cans, pot fragments and broken glass, all dating from the early 1940s when the mine was abandoned. Past the camp, the track heads west and soon meets the path to Pine City; turning right, the land rises very gently, past a few small pines and on to the main wooded area, where taller trees grow between piles of huge, rounded boulders up to 50 feet high. There are many shady places, under the trees and between the rocks, and the area is ideal for exploration, and a good place for children to play. Other destinations nearby include Pine Spring, a small watersource a quarter of a mile east, and the site of the settlement of Pine City (another former mining camp), though nothing remains today. As with Desert Queen Mine, a fainter trail, (just a route in some places) continues, down a long, twisting canyon all the way to the north entrance road, a total distance from the trailhead of 5.5 miles. 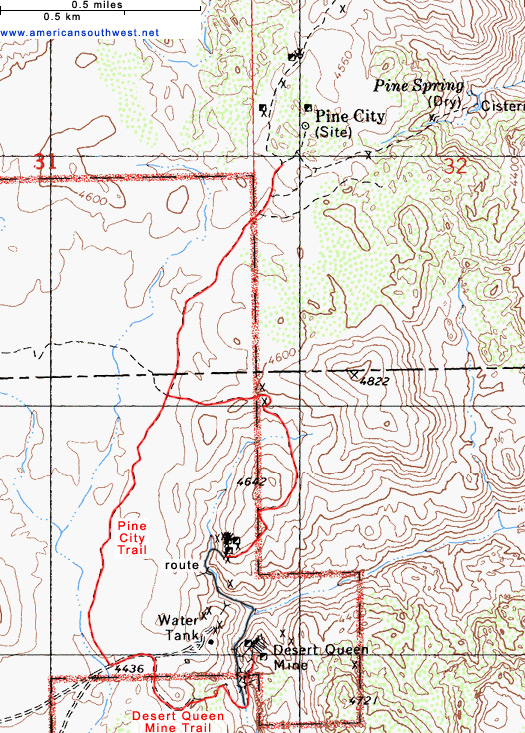 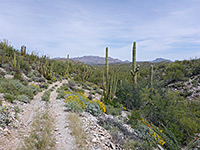 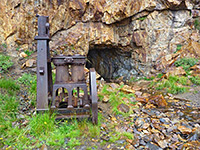 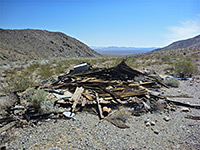 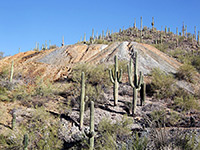 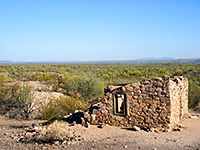