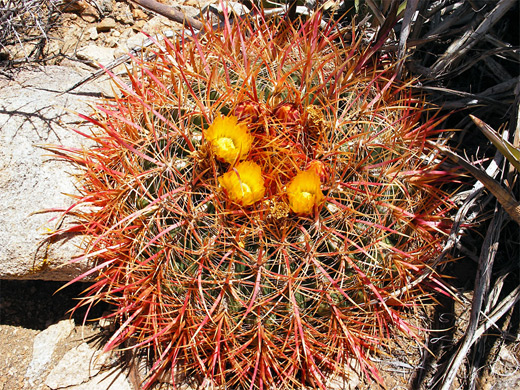 Ferocactus cylindraceus is by far the most widespread of the giant barrel cacti, and is quite variable in spine color - deep red, whitish, yellow, or intermediate shades, but characterized by a long (up to 5 inches), curved central spine that points outwards and downwards and is covered by tiny ridges. Close by are 3 more outward-pointing spines, slightly shorter, and 8 to 28 smaller, lighter colored radial spines, all contributing to a dense lattice that mostly obscures the green stem and its pronounced ribs, numbering 18 to 31. Flowers are yellow, appearing in spring and early summer, while the fruits are bright yellow.

There are no other barrel cacti for most of its range - California, Nevada, Utah, northwest and southwest Arizona; only in central and south Arizona does it overlap with the other two large barrels, ferocactus wislizeni and ferocactus emoryi, but the California barrel can be distinguished because the former has fewer and smaller radial spines, while the latter has no radial spines at all.

Aged California barrel cacti may lean towards the southwest, a trait more often noticed in the similar ferocactus wislizeni. The cactus favours rocky locations, especially the sides of canyons, but is found in a variety of situations. Young plants are spherical and tend to have deep red spines, taking on the familiar upright shape, and lighter spines, after a few decades. The species is also known as ferocactus acanthodes. 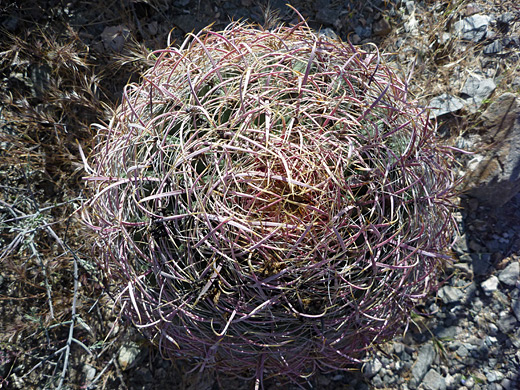 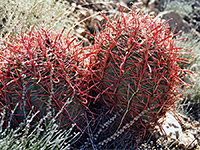 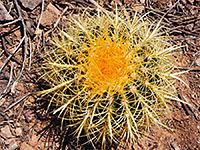 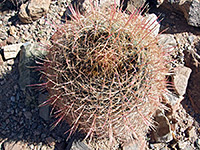 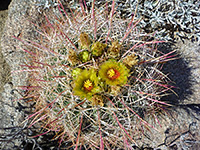 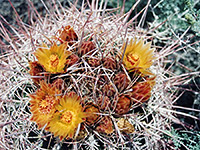 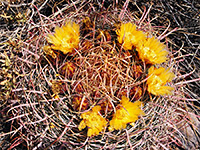 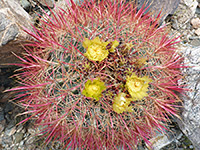