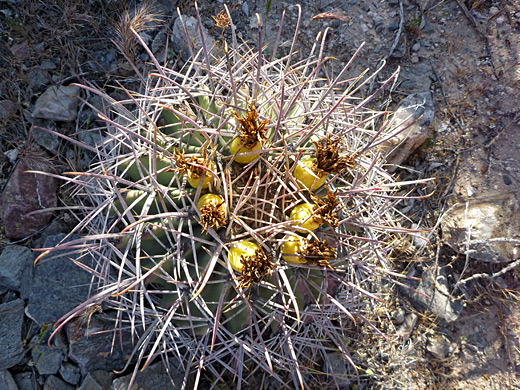 Ferocactus emoryi is quite common in Sonora, Mexico, but has the most limited range of the three large barrel cacti in the US, found only in a small area of far south Arizona, centered on Organ Pipe Cactus National Monument, extending northwards only to the vicinity of Ajo. The plant is easily distinguished since unlike the other two barrels, ferocactus cylindraceus and ferocactus wislizeni (which also occur in parts of this area), there are no thin radial spines, only thick, reddish central spines, bearing tiny transverse ridges. The longest (up to 4 inches) points straight out, curves downwards and is somewhat hooked at the end, while the others, numbering 5 to 9, are also strong, between 2 and 3 inches in length. Spine clusters have a notch above each areole, and are borne on 21 to 32 protruding ribs.

Like most barrel cacti, the fruit of ferocactus emoryi are large and yellow, but in contrast to the other two Arizona species, flowers are red, both the petals and the interior. They bloom in late summer. 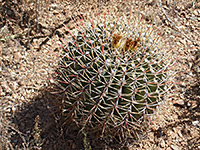 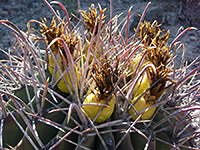 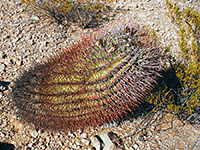