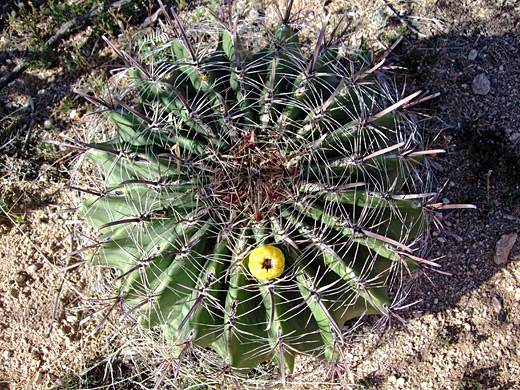 Ferocactus wislizeni, the Arizona barrel cactus, forms a tall cylinder up to ten feet high, though four to six feet is more common, often leading towards the southwest. Some aged plants may topple completely and grow sideways, if their roots remain intact, but otherwise falling over is one of the most common ways for the cactus to die. The 20 to 30 straight ribs bear clusters of generally dull colored spines - white, gray or brown, with a long (up to 5 inches), strongly hooked central spine, 1 to 3 smaller ones, and 6 to 16 radials which are white, thin and bristle-like. The relatively light spination - adjacent clusters do not generally overlap - allows the green stems to be clearly visible, unlike the similar ferocactus cylindraceus which has a much denser, overlapping lattice.

The plant is quite frost tolerant, so also grows on the mountains bordering the low deserts, up to 5,000 feet elevation. In Arizona, ferocactus wislizeni is found all across the south of the state, south of the greater Phoenix area, and overlaps to some extent with ferocactus cylindraceus, though the range of this species extends much further west. The third giant barrel cactus of Arizona, ferocactus emoryi, found only in the far south, is easily identified by its lack of thin radial spines. 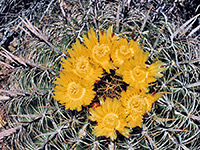 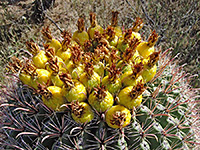 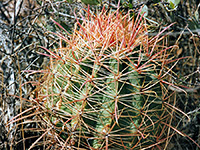 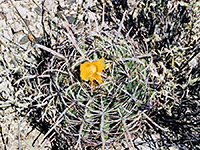 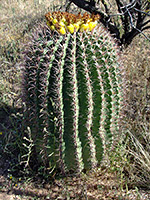