Created 12th February 2016 (along with the Sand to Snow and Castle Mountains national monuments), Mojave Trails National Monument protects 1.6 million acres of the Mojave Desert in southern California, between Mojave National Preserve to the north and Joshua Tree National Park to the south, and in the other directions extending from the vicinity of Needles near the Arizona stateline, westwards to the Cady Mountains near Barstow. The two main reasons for the monument are to create a continuous protected desert area and wildlife corridor with the other two preserves, now spanning 130 miles north to south, and in recognition of various historic trails across this part of the desert, most famously being Route 66 - one hundred miles of the surviving road are within the boundary, undoubtedly the most scenic section in the state.

Most of the national monument contains huge flat plains and broad valleys, separated by isolated mountain ranges, but also here are sand dunes, volcanic remnants, dry lakes, riparian areas and old mines. There are very few recognized trails in the preserve, so it is instead usually explored by driving, and for many people the reason for visiting is simply to experience the vastness and emptiness of the desert, traveling either along the two main roads (Route 66 west-east, Kelbaker and Amboy Roads north-south) or the many lesser tracks, rather than to explore specific locations. Nearly all of the land is open for free primitive camping, and a night spent under the stars, well away from any sign of civilization, is a very memorable experience.

Gates to Amboy School, closed in 1999

Interstate 40 forms the majority of the northern boundary to Mojave Trails National Monument, except at either end, where the preserve includes areas further north, together partly enclosing the adjacent Mojave National Preserve. In the west, the monument contains most of the Cady Mountains Wilderness Study Area, a series of ridges and valleys, and also the Afton Canyon Natural Area, where a short section of the Mojave River flows year round through a colorful ravine lined by banded rocks, sustaining an important riparian environment. The canyon is reached by a 3 mile graded track from I-15 exit 221, while the WSA is accessed from the south, via the rougher Crucero Road from Ludlow on I-40 (exit 50). Old Route 66 also starts at Ludlow, initially paralleling the interstate for a short distance then heading off to the southeast, passing several tiny communities including Baghdad, Amboy, Chambless and Essex, then crossing I-40 again at exit 115 (Fenner) and finally merging with US 95 24 miles further. Along Route 66 are another four wilderness areas - Trilobite, Clipper Mountain, Piute Mountains and Bigelow Cholla Garden - all centered on mountain ranges; the former (containing the Marble Mountains) is famous for its early Cambrian trilobite fossils, while the latter, across the north edge of the Sacramento Mountains, is home to a particularly dense and extensive population of the teddy bear cholla cactus. There are also two developed sites along the road; a picnic area and trailhead for the 1.7 mile hike across lava fields to Amboy Crater, and similar facilities at Bonanza Spring, another riparian area, within a scenic, half mile-long limestone canyon. 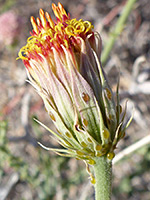 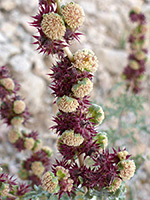 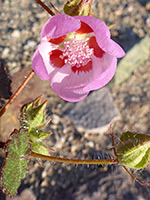 
More wildflowers in the national monument

The southern section of the national monument is crossed by Amboy Road, which from Amboy initially passes over the salt flats of Bristol Lake, site of mineral extraction operations owned by Standard Lithium, on land excluded from the preserve. Beyond, the road begins a long, gradual rise to Sheep Hole Pass, which provides archetypal, sweeping views of straight roads, remote mountains and desert plains, and adjoins the Sheep Hole Valley Wilderness, the largest such area in the monument, centered on two mountain ranges (Sheep Hole and Calumet), and an intervening valley. Most of this adjoins Joshua Tree National Park to the south. One other route through the southern section of the national monument is the 50 mile Cadiz Road, a generally wide, flat, graded track suitable for regular vehicles unless wet, linking Chambless on Route 66 with Hwy 62. Along the way it passes close to the Cadiz Dunes, also part of a wilderness area - a small group of orange-pink sand dunes, entirely unvegetated, explorable from two trailheads at either side.

14 views of the national monument