Highlights:
Anasazi and Sinagua ruins, built on mesa tops or the rims of shallow canyons, surrounded by the wide open plains of the Painted Desert. All have a rich red color, and were constructed from the local Moenkopi sandstone
Nearest city with hotels:
Flagstaff, 30 miles
Management:
NPS
Location:
35.574, -111.529
Seasons:
All year
Rating (1-5):
★★★★★ 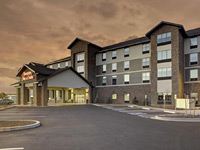 Recently-built hotel in east Flagstaff beside I-40 at the Country Club Drive exit; most rooms enjoy fine views of the San Francisco Peaks to the north

Wupatki National Monument is one of several sites preserving pueblos (villages) of ancient peoples, but unlike the Tonto, Montezuma, Casa Grande Ruins and Tuzigoot monuments which contain only one main building, here there are many ruins scattered over a large area of desert northeast of Flagstaff. The pueblos all have a distinctive deep red color and were made from thin, flat blocks of the local Moenkopi sandstone. Wupatki is reached by the same loop road that passes Sunset Crater Volcano National Monument, adjoining the main north-south route US 89 - there is a single admission charge ($25 per vehicle in 2020) for both parks.

In total there are more than 800 identified ruins spread around many miles of desert within Wupatki National Monument, but five of the largest (Wupatki, Wukoki, Lomaki, Citadel and Nalakihu) are close to the main road (see map), and these are the only sites open to visitors. All the dwellings were built by the Anasazi and Sinagua Indians during the 12th and 13th centuries - the habitation of this region was influenced by the eruption of nearby Sunset Volcano during the winter of 1064-5, as the resulting ash and lava made the surrounding land infertile and so the residents of that region moved further afield into desert areas previously considered too dry and barren. In the early 13th century all the settlements were abandoned, as were most other villages in this part of the Southwest, although it is believed that some of the present day Hopi are descended from the former inhabitants of the Wupatki pueblos.

North side of Wupatki Pueblo

The Wupatki area is 2,000 feet lower than the volcanic region north of Flagstaff so the vegetation is quite different - the loop road from Sunset Crater descends quite quickly through fir and pine trees to the arid scrub-covered desert, and soon arrives at the visitor center, next to the largest of the ruins.
Affiliate disclosure

This is the 3-storey Wupatki Pueblo (Hopi for 'big house') that was once home to 300 people and had over a hundred rooms. The settlement is built on the edge of a small plateau and has unobstructed views eastwards towards the Painted Desert and the Little Colorado River. The ruins are reached by a short, paved, self-guided trail starting at the visitor center, which takes about half an hour to walk at a leisurely pace. Hiking off trail is not permitted. A leaflet is available describing 20 points of interest; apart from the main building, these include a circular community room, a masonry ballpark - a recreational feature usually only found much further south, and a natural blowhole. This is a vent of unknown depth linked to underground passages in the sandstone, and either blows out or sucks in air, depending on the ambient pressure. All the rooms at Wupatki are partially reconstructed, and the main building once served as a residence for an early park manager and his wife, though the extra walls and stairs constructed during their tenancy have long since been removed.

Door or window in Wukoki Pueblo

Just south of the park headquarters at Wupatki Pueblo, a side road branches eastwards to the Wukoki ruins, perhaps the most distinctive in the park as the house is built on an isolated block of sandstone, visible for several miles across the flat surroundings. The structure is quite tall, centered on a square, three storey tower with a series of intricately-constructed rooms at one side. The bricks have a deep red color, and the building merges seamlessly with the underlying Moenkopi rock. A short trail loops around the ruin and climbs to a vantage point on top. Past the Wukoki turn-off, the side road becomes unpaved and bumpy, crossing treeless, desert land for 5.5 miles without encountering anything of great interest until the monument boundary at the Little Colorado River, which at this point is wide, stony and usually dry. The track, now for 4WD only, continues across the riverbed into the Navajo Indian Reservation.

Like all five of the accessible ruins in Wupatki National Monument, the impressive remains of Lomaki Pueblo are reached by a short trail, starting towards the north end of the park road. The dwelling is built right on the edge of a shallow, vertical-walled canyon, which was probably formed by faulting or other volcanic activity, and has a good view of the snow-capped San Francisco Peaks to the west. Several smaller ruins may be visited along the same trail, further along the rim of the box canyon. All buildings sit on flat, thin-layered strata of the local Moenkopi sandstone, deep red-brown in color, and eroding at the edges so that the canyon floor is littered with fallen boulders; the broken rocks complement the crumbling masonry walls of the pueblo. In contrast to the rich red rocks, the soil around the canyon is mostly black volcanic ash.

Nalakihu is a small, partly restored pueblo alongside the main road close to the northern entrance. A very short trail runs past towards the more impressive Citadel Pueblo, built all across the top of a small hill overlooking the undulating surroundings, which include a limestone sinkhole just to the south. Citadel is unreconstructed so there isn't much to see, just a large pile of fallen stones enclosed by a low wall. Many other stones from the building are scattered over the slopes below, mixed with black blocks of lava. From the hilltop several other ruins can be seen, at the edges of some of the adjacent mesas, though none can be visited since off trail hiking is not permitted.

Apart from the short trails to the five pueblos, the only other path in the Wupatki area (actually just south of the monument boundary) is the 0.5 mile route to a secondary summit on the south side of Doney Mountain, an extinct volcano whose rounded slopes are composed of red and black ash. The trail begins at the Doney Mountain Picnic Area, a pleasant, tree-lined site a little way off the main road; the path climbs steadily up the smooth, barren hillside, passing the faint remains of a single-room dwelling made of lava blocks, and reaching the top after gaining 210 feet in elevation. The mountain is named after an early explorer and excavator of Indian artefacts, who mistakenly thought the colorful volcanic peak might be the location of a fabled lost gold mine, and spent several fruitless years looking for it. The views from the summit are excellent, and include the San Francisco Peaks, the Painted Desert and the Little Colorado River valley.