Long Canyon is a large and increasingly overgrown drainage enclosed by high red and brown cliffs, southeast of Secret Mountain. Not often explored, especially the upper end where the trail steepens, climbing up to a viewpoint above the woodland

Length: 3.7 miles, including an unmaintained section at the end

Season: All year - at least half is shaded, and relatively cool even in summer

Long Canyon is one of eight significant tributaries of Dry Creek, in the Red Rock Secret Mountain Wilderness northwest of Sedona, all of which may be explored by a maintained trail. As its name suggests the drainage is relatively long, though comparable to its two nearest neighbors, Boynton Canyon to the south and Secret Canyon to the north. The trail is 3.7 miles in length, including a short unofficial extension at the end, climbing up above the dense woodland of the upper canyon, to a fine viewpoint on a rocky spur, surrounded on three sides by dramatic, vertical cliffs of Coconino sandstone.

The route starts in desert-like surroundings, crossing red, sandy land covered in the usual low elevation Sedona vegetation of yucca, agave, opuntia, manzanita and pinyon pine, then enters thicker woodland after 1.5 miles and stays in the trees for the remainder of the way, with only occasional views of the enclosing cliffs. The streambed is usually dry, lacking even residual pools except right after rainfall, yet the woodland in the enclosed parts of the canyon is always sheltered, cool and moist, home to a different selection of wildflowers to the exposed lower section. There are several ancient ruins in the canyon, one apparently once used as a movie set, but all are away from the trail and not so easy to locate.

Reddish cliff beside the creekbed
The trail is lightly used compared with others in the vicinity, perhaps because the views are limited once in the woodland, and the route is relatively long, becoming more strenuous further upstream. Most people just walk a mile or so, until the vegetation closes in. The hike is a good choice even in summer due to the partial shade.

14 views of Long Canyon, panorama at the end of the trail.

The hike starts from a small, sandy parking area on the north side of Long Canyon Road, shortly before the entrance to the Seven Canyons Golf Club. Additional parking space is available on verges. This area seems mostly used by cyclists, who are able to travel along the first 0.9 miles of the trail, as far as a junction, to Boynton Pass, and also along a path (Chuckwagon Trail) on the far side of the road, leading towards Devils Bridge. There are no Red Rock Pass payment machines at the trailhead.

The first part of the path is wide, following an old road bed, over level, sandy ground, up to the crossing of a dry wash, where it leaves the track, becomes narrower and more curving, now running very close to the edge of the golf course. After a gate/fence it reaches a junction on the left with the Deadmans Pass Trail towards Boynton Canyon, and here a sign warns that bikes are prohibited from continuing straight on, since the Long Canyon route soon enters the wilderness. This path next has a few minor rises and descents while crossing the same semi-desert vegetation, plus juniper and Arizona cypress, heading towards prominent red/brown cliffs which form the end of the narrow, pinnacle-lined ridge (Maroon Mountain) that borders the north side of the canyon. A few larger trees start to appear as the trail approaches the streambed, later crossing it a few times in quick succession. Cliffs are now on both sides of the drainage though quite far away, and visible only occasionally through gaps in the trees.

Vertical cliffs at the far west end of the canyon

The path becomes a bit rockier, winding through increasingly thick woodland that still has a few open patches. Hill's lupine and rough draba are amongst the most visible spring wildflowers. After another half mile it passes over a little ridge, where a tall fin comes into view ahead, at a major divide in the canyon, and a short unofficial path climbs a little way to a viewpoint at the base. The main trail veers into the right (north) fork of the drainage, and steepens, as the surroundings become more enclosed - the trees are taller, the canyon sides more vertical, and the undergrowth thicker. The route runs right along the streambed in a few places but mostly stays to one side, usually the south. There is no appreciable change in scenery, and the final destination would not be obvious were it not for an 'End of Trail' notice, just before a wash crossing.

Above the trees; view back east along the canyon

From the final wash crossing, a narrower, unmaintained path continues for another ten minutes, marked by cairns - up a slope, through the bushes and trees for a while then along the base of a reddish cliff, past a tiny arch and up some more to a rocky promontory above the woods. This point is about level with the top of the tallest tree on the canyon floor, and also approximately at the top of the red rock layer (Schnebly Hill Formation); above, all the cliffs are part of the orange/brown Coconino sandstone. All around are a mix of sheer rock faces and very steep, wooded gullies, showing that while it may be possible to scramble a little further up the streambed, or a tributary, there is no easy way to reach the plateau above, at least not from here, though the canyon can be seen from the remote viewpoint on the rim at the end of the Secret Mountain Trail. The promontory overlook has only partial views downstream as some of the land is hidden behind a massive, protruding fin. 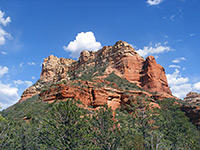 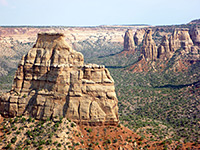 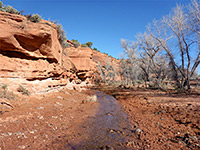 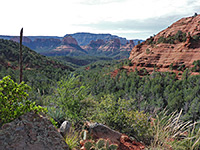