Yellowstone National Park is by far the most popular natural attraction in Wyoming, a lightly populated state with few large cities or tourist sites; away from the Rocky Mountains in the western third, the land consists mostly of treeless plains, low mesas and shallow, branched, meandering river canyons. Besides Yellowstone and the adjacent Grand Teton national parks, for which the lively town of Jackson acts as a recreation center, there are only five other National Park Service units, all rather less visited, located in scattered areas across the state.

Highlight of Wyoming is Yellowstone, the first national park in the World, and possibly still the best, featuring amazing geothermal phenomena, a vast array of wildlife, and beautiful canyon, lake and mountain scenery. A week could easily be spent here just viewing the roadside overlooks and hiking a selection of the shorter trails. The park is open all year but fully accessible only between late spring and late summer due to very heavy winter snowfall. To the south, Grand Teton National Park contains a spectacular mountain range, the east side of which rises very steeply over 5,000 feet above the flatlands of the Snake River Valley, without any intervening foothills.

The Rocky Mountains of west Wyoming are divided into several sub ranges, principally Gallatin and Absaroka around Yellowstone, Teton, Snake and Salt River to the south and the Wind River Range further southeast, which contains many peaks over 13,000 feet and vast areas of spectacular Alpine wilderness, yet remains relatively little-known. Other attractions in this part of the state are Periodic Spring, an unusual intermittent stream, Sinks Canyon State Park, where the Popo Agie River disappears into a cave and reappears a short distance downstream, and Fossil Butte National Monument, preserving the site of important fossil discoveries. Away from the national parks, all of Wyoming's Rocky Mountains are part of national forests (Shoshone and Bridger-Teton) and so open to many kinds of recreation.
South of the Wind River Range the mountains become smaller and more isolated, but continue all the way into Colorado and merge with the taller peaks of the northern Colorado Rockies. The continental divide runs all across Wyoming, along the mountain crest, and splits to form two basins - a small one in Yellowstone National Park and a much larger area to the south, where the land is generally lower in elevation and rather barren, part of an isolated region known as the Red Desert, or Great Divide Basin. While too wet to be classed as a true desert, the basin does have desert-like features such as dry lakes, eroded sandstone formations and scattered cacti. Red is also the predominant color of the rocks further south, towards the Utah stateline, which are exposed in many locations in Flaming Gorge National Recreation Area, centered on a large, branched lake enclosed by low hills around the north end and sheer sandstone cliffs downstream, in Utah. 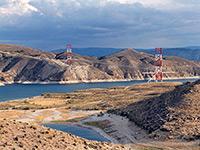 Elsewhere in central Wyoming, amongst the endless, undulating prairie, are several other interesting sites such as Hot Springs State Park (travertine deposits beside the Big Horn River), Boysen State Park (another sizeable reservoir, along the Wind River) and Independent Rock, a granite outcrop surrounded by flat grasslands and marked with the signatures of thousands of 19th-century pioneers. Other notable locations are found in the north and east of the state, but only the flat-topped volcanic peak of Devil's Tower National Monument, the vast waters of Big Horn National Recreation Area and the preserved buildings of Fort Laramie National Historic Site are relatively well known.