Teton Park Road
Sites along the scenic drive, a relatively quiet side road west of US 191, including Lupine Meadows, Jenny Lake, String Lake and Signal Mountain

Hiking
Descriptions of all trails in the park, from 12 trailheads; paths to viewpoints lakes and along canyons. Featured trails are listed below
Featured Hotel 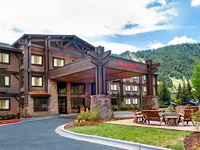 All hotels in Jackson - Affiliate disclosure
Many other US mountains are taller, more extensive and equally rugged, but none can match the Teton Range in northwest Wyoming for the steepness with which the east face rises above the flatlands of the Snake River Valley, gaining over 5,000 feet in a horizontal distance of just a few miles, without any intervening foothills. Several dozen glaciers around the summits keep the mountains partly snow covered even in late summer, and for much of the year the peaks are buried beneath an unbroken expanse of ice.

The mountains stretch for a relatively short distance, rising up near the small town of Jackson and extending northwards for 30 miles, until the land slopes down to the edge of the Pitchstone Plateau in Yellowstone National Park. The highest and most spectacular section of the Tetons is towards the south end, where several of the highest peaks (the Cathedral Group) are clustered together, centered on 13,770 foot Grand Teton. Twelve summits exceed 12,000 feet.

Grand Teton National Park contains the eastern half of the mountains - the park boundary runs approximately along the crest - together with two other large features, 25,540 acre Jackson Lake and the wide valley of the Snake River, known as Jackson Hole. Along the edges of the valley are a dozen or so smaller lakes, which provide destinations for many of the park's trails. Only six paths climb into the mountains, most following a narrow, steep-sided canyon up into the high Alpine country above the treeline. All major summits are out of reach to regular hikers, however, instead accessible only to rock climbers.

Aspen
Besides hiking, climbing and general sight seeing, the park also offers boating (principally on Jackson and Jenny Lakes), fishing, skiing & snowboarding, camping, horse riding and wildlife viewing - Grand Teton National Park is home to all the varied wildlife found just to the north in Yellowstone, including bison and elk around the Snake River, moose in the stream-fed canyons, wolves anywhere in the lower elevations, grizzly bears across the northern section of the mountains, and black bears in the meadows and foothills. Both national parks may be visited for a single fee of $35 per vehicle (2021), valid for seven days.

The main highway through the national park is US 191/89, which follows close to the east side of the Snake River, from Jackson north for 57 miles into Yellowstone National Park (see map). Half way along it is joined by US 26/287 at Moran Junction, allowing access from the east. The only other route into the park is Moose-Wilson Road from the southwest, which leads to one of the lesser used trailheads (Granite Canyon). Although the best overall views of the mountains are from US 191/89, the principal scenic drive is Teton Park Road, running for 21 miles along the west edge of the valley, passing various lakes, trailheads, picnic areas and overlooks.

Five distinct climate zones are represented in Grand Teton National Park; highest is the Alpine tundra region above 9,000 feet, where bare granite predominates, sprinkled with patches of short grass, small wildflowers, moss and lichen, though all is hidden by snow for up to 8 months of the year. Forests cover the lower slopes, composed of spruce fir and whitebark pine at the upper elevations, with Douglas fir, lodgepole pine and limber pine beneath. Between the mountains, the flat land of the valley floor has only occasional trees and is instead covered with uniform sagebrush and grasses, habitat for antelope and bison. Flowing slowly through the valley, the Snake River creates the largest area of wetlands in the park, terrain also found around lakes and smaller streams; this is the favored location for moose and numerous smaller mammals. Finally, the lakes, rivers and ponds harbor many types of fish, which in turn help support a large and varied bird population.

The Moose-Wilson and Teton Park roads are closed in the winter, usually from the start of November to the beginning of May, though US 191/89 is open all year. NPS campgrounds and visitor centers have slightly shorter opening seasons, typically late May to early October. But many activities are still possible in the winter, from multi day cross-country skiing trips to just photographing the snowy mountains from the highway. January and February daytime temperatures peak in the 20s Fahrenheit (-5°C), dropping to zero or below at night, but rise by around 10 degrees each month until a maximum of the low 80s (ca. 28°C) is reached during July. Snow is likely in the valley any time between October and the start of May.

Hidden Falls and Inspiration Point
★★★★★
2.5 miles, 417 feet
At the far side of Jenny Lake, the first point of interest is Hidden Falls, a pretty, 100 foot whitewater cascade on the creek emerging out of the canyon. A side path climbs a little further to Inspiration Point, on a cliff high above the lake

Death Canyon and Albright Peak
★★★★★
7 miles, 3770 feet
For a day hike, one suitable target along the Death Canyon Trail is the junction with the Alaska Basin Trail after 3.8 miles - in quite an open and scenic part of the canyon. This trail rises very steeply from the valley floor passing close to Albright Peak

Emma Matilda Lake
★★★★★
1.8 miles, 100 feet
Pleasant trail, good for wildlife, that starts across marshy ground near Christian Creek, climbs slightly to a viewpoint of pretty Christian Pond then leads through partly wooded land to the south edge of a large lake

Hermitage Point
★★★★★
4.7 miles, 100 feet
Loop trail across a fairly flat but heavily wooded promontory on the east side of Jackson Lake. Two scenic pools (Heron Pond and Swan Lake) are reached near the trailhead; thereafter the hike is mostly through the woods

Lakeshore Trail
★★★★★
1.8 miles, level
Easy path along the Jackson Lake shoreline near Colter Bay, across a causeway and all around the edge of a small, isolated forested peninsula

Leigh Lake and Moran Bay
★★★★★
6.5 miles, 140 feet
A mostly level trail that starts at String Lake, runs all along the forested east shore of Leigh Lake then reaches two much smaller lakes. A continuation path descends a little to Bearpaw Bay on Jackson Lake

Paintbrush Canyon
★★★★★
7.9 miles, 3870 feet
Long, testing but very scenic trail starting near String Lake and climbing all the way up U-shaped Paintbrush Canyon, past Holly Lake to a highpoint at 10,700 foot Paintbrush Divide

Taggart and Bradley Lakes
★★★★★
4.5 miles, 400 feet
Two scenic and quite easily reached lakes are the main destinations from the Taggart Lake trailhead, Bradley being the other

Two Ocean Lake
★★★★★
6.2 miles, 80 feet (loop)
Circuit of a large lake, through meadows and woodland, mostly quite far from the water

Nearby places
Similar places
Rocky Mountain National Park, Colorado - the most scenic and accessible section of the central Rockies