Easy path along the Jackson Lake shoreline near Colter Bay, across a causeway and all around the edge of a small, forested peninsula, passing a few secluded pebbly beaches

Season: All year; may be affected by snow in winter

Although Jackson Lake is very extensive, it remains largely out of sight of the main routes through Grand Teton National Park (US 191 and Teton Park Road), being separated from the highway by thin belts of woodland. But several footpaths allow close up views, and the shortest is the 1.8 mile (loop) Lakeshore Trail, which begins at Colter Bay Village and leads right along the stony shoreline for a way then circles round an isolated, wooded peninsula, en route passing a shallow lagoon popular with birds and other wildlife.

The hike is good for children as it is level, quite short, and encounters a variety of scenery including a nice stretch of sheltered beach on the far side of the peninsula.

The hike can start from either the Colter Bay visitor center, amphitheater, marina or picnic area; a short walk west through the trees reaches Jackson Lake, bordered at this point by a wide, stony beach. There are several picnic tables here, some right by the water's edge. The path runs southwards staying close to the shore, past land (on the left) covered by densely growing pines and other undergrowth, and soon arrives at a narrow bank of stones with water at each side - the main lake to the west and a shallow inlet (Colter Bay) to the east. This leads to the peninsula, which is almost an island since the causeway rises just a few feet above the water level. The trail then loops around the promontory, mostly through the tall trees in the middle, out of sight of the lake, though coming back to the shore on the far southwest side, which has a long section of clean, pebbly beach, dotted with large pieces of driftwood. The beach allows a fine view of islands and other bays nearby, and across Jackson Lake to the trailless east side of the northern Teton Range. This would be a good place to spend a few hours on a warm summers day, despite the waters always being too cold for swimming. 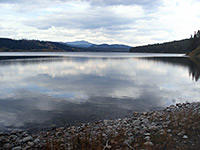 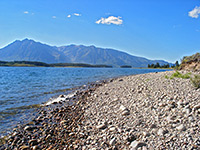 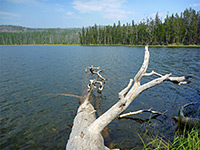 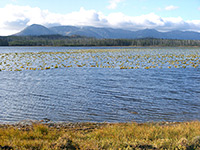 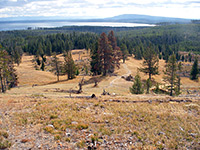