Highlights:
Secluded mountain stream near Afton which starts and stops at regular intervals; one of only a few such intermittent springs in the world. Reached by a 4 mile forest track then a one mile trail
Nearest city with hotels:
Afton, 4 miles
Management:
USFS - part of Bridger-Teton National Forest
Location:
42.744, -110.849
Seasons:
Spring, summer, fall
Rating (1-5):
★★★★★
Weather: 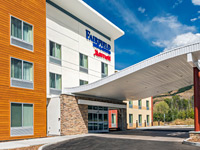 The only chain hotel in Afton, along a quiet side street close to shops and restaurants; 4 miles from Periodic Spring. Complimentary hot breakfast

Hotels in Afton - Affiliate disclosure
The small town of Afton in west Wyoming is notable for two reasons. Firstly, it is home to the world's largest elkhorn arch - a bridge across the main road (US 89; N Washington Street) which is 75 feet wide, 18 feet high and adorned by over 3,000 antlers. Such arches are found in several other towns in the state including Jackson, but this is the biggest. Afton's second claim to fame is the proximity to Periodic Spring (also known as Intermittent Spring), a rare geological feature where a natural spring flows discontinuously, ceasing entirely for a few minutes at regular intervals, behaviour thought to be caused by underground siphon activity.

Only a very small number of such springs are known in the world, other locations being Gihon Spring in Jerusalem, Dhor Barahi near Pohara in Nepal, Gyechon in South Korea, Fontaine de Fontestorbes in France and Igla in Slovenia; again, the one near Afton is (thought to be) the largest. Periodic Spring is situated near the edge of the mountains that rise up just east of Afton, and while the starting and stopping of the water is not as exciting to watch as might be imagined, the spring has a scenic setting in a pretty, steep-sided canyon, and the one mile hike to the location is quite enjoyable, passing a series of pools and cascades along a fast-flowing stream.

Map of Afton and Periodic Spring

Road to the Spring

Afton is a friendly place offering an assortment of Western shops and a few small hotels. The signposted road (2nd Avenue) to Periodic Spring forks off Highway 89 in the town center, soon becoming unpaved and entering thick woodland, part of the Bridger-Teton National Forest. It passes a shady USFS campground then follows the narrow canyon of Swift Creek into the mountains (the Salt River Range) for 4 miles to a parking area, where the track ends. For most of the way, the road parallels a large, green, newly constructed water pipe, which provides an improved supply to the nearby town. Some sections of the canyon walls show impressively jagged rock formations, composed of twisted strata inclined near vertically, though most is covered by dense forest - a mixture of fir, oak and aspen, some of which turn bright red/orange colors in the fall.

A wide, stony trail continues upstream from the parking area, climbing gently and staying close to the creek for nearly a mile until arriving at the base of the short side ravine that contains the spring. The path splits, with one branch starting to ascend the steep hillside on the north side, and the other crossing the creek on a footbridge then going up the ravine to the spring; the last section is over boulders kept moist by spray from the exit stream, and so is liable to be slippery.
Affiliate disclosure

The cliffs above are sheer, angular, dark and crumbling, enclosing the spring on three sides to create a cool, sheltered alcove. The actual source is less exciting to look at, since it has been modified to prevent rocks falling into the vent, and now has a concrete roof, metal baffles and assorted pipework, resulting in a rather unnatural appearance. The water typically flows normally for 15 to 20 minutes, decreases in intensity during the next few minutes and stops completely for several minutes more. The current resumes quickly, preceded by muffled subterranean noises, though without the sudden surge that characterizes a geyser. The cycle is best observed during mid to late summer, as at other times the periodicity is less evident. Intermittent springs are similar to cold water geysers in that they are not associated with geothermal activity, but such geysers derive their power from expansion of trapped carbon dioxide, so are quite different to the springs. Afton's spring was (re)discovered early in the 20th century by a local sawmill owner who observed the regular fluctuations of Swift Creek, and tracked up the canyon to find the cause, though long before this the location was known to the native Shoshone Indians.

10 views of Periodic Spring and vicinity

Stream below the spring