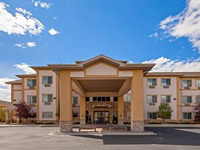 12 miles east of Fossil Butte; a modern hotel by the US 30/US 189 intersection in Kemmerer, ofefring free hot breakfast and an indoor pool

Hotels in Kemmerer - Affiliate disclosure
In the transition zone between the Rocky Mountains along the west edge of Wyoming and the flat deserts in the center of the state, Fossil Butte National Monument occupies a small area of grassy mesas and sagebrush valleys in Lincoln County, 15 miles from the city of Kemmerer, and it preserves one of the most productive locations in the USA for fossils of the Eocene era. Fifty million years ago this region lay under the shallow waters of a subtropical lake, and today, the thin, flat, sedimentary layers of the Wasatch and Green River formations contain innumerable fossils of plants and animals, ranging in size from tiny insects to alligators and turtles.

Fossils cannot, in general, be seen in situ, however - only in the museum at the visitor center - and as the terrain is rather dull, consisting of low hills and shallow valleys, uniformly grey-brown in color, the monument does not offer that much of interest to non paleontologists. There are two loop trails, one to an old cabin and the site of a historic fossil quarry, the other through aspen groves at the foot of the main fossil-bearing mesa (Fossil Butte), plus a seven mile park road which climbs to the mesa top and offers good views of the wider landscape, but despite these, and the informative visitor center, the national monument has to be a candidate for the least memorable NPS unit in the West. Unusually for the park service, no entrance fee is charged, perhaps owing to the lack of any major attraction.

Fossil Butte National Monument is the only notable site along the 24 mile section of US 30 between Kemmerer and the junction with WY 89 in the Bear River valley. Half way along, a quiet side road (Lincoln County 300) parallels the highway for 5 miles, passing the park entrance, but very little else, as most of the surroundings are undeveloped BLM land. There is no campsite in the park but good places for free camping can be found along an unpaved track branching off to the east, just south of a railway bridge; one possibility is at a gravel pit, reached after one mile. This has panoramic views of the rolling, uninhabited landscape, and is well away from the main road.

The short road through the national monument first passes the visitor center/museum/bookstore, housed in an octagonal building overlooking Chicken Creek, which drains the western slopes of Fossil Butte. The road continues up the valley for 2 miles to the parking area for the Nature Trail (see below) and the Chicken Creek picnic area (setting for evening campfires in summer), then becomes unpaved, climbs quite steeply several hundred feet to the top of a mesa and runs along flat, open ground for another 3 miles, around The Bullpen (a circular butte) to the northern monument boundary. Several dirt roads enter the surrounding BLM land, and three tracks are open to foot travel; these take hikers to overlooks of distant buttes and badlands, the best viewpoint being at Rubey Point, on the west side.

The one trail along the park road loops around the foothills of Fossil Butte for 1.5 miles, through land once under the subtropical lake, en route passing a small quarry where fossils are still being unearthed. The path - originally the Fossil Lake Trail, now known as the Nature Trail - descends a little at first then starts to climb, entering an island of short but densely-growing aspen. Like other groves scattered along the base of the otherwise barren mesas, the aspen are sustained by small springs; away from the water, the slopes bear only short grass and sagebrush, and the Fossil Lake Trail soon returns to open ground and reaches its high point, 300 feet above the road. A short spur leads through a gate to the active fossil excavation area, where many thin strata are being carefully and slowly removed, but visitors are only allowed to inspect the site if accompanied by a ranger. Next to the gate, a row of benches provide a resting place from which to gaze at the vast high desert landscape. The remainder of the trail descends through a second, smaller aspen grove and past the Chicken Creek picnic area, back to the car park. The aspen forests are likely locations to spot wildlife, especially mule deer.

Aspen grove along the Nature Trail

The longer of the two maintained paths in Fossil Butte National Monument begins along county road 300, close to the railway bridge. The trail sets off into a range of small hills along the south edge of Fossil Butte and climbs to the site of an old fossil quarry, in operation until the 1960s. Nearby is a short diversion to a log dwelling used by David C Haddenham and his family during their excavations at the quarry, over a period of 50 years; in recognition of the structure's importance, the Haddenham Cabin was added to the National Register of Historic Places in 2003. The path turns southeast and runs along the base of the butte for about a mile then begins a steep descent back to the trailhead. The full loop is 2.5 miles long, gains 600 feet in elevation, and has interpretive notices along the way, describing the local geology, history and wildlife.