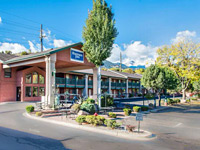 Exterior corridor motel with views of wooded hills, on the edge of Manitou Springs; close to Garden of the Gods and 20 miles from the Florissant Fossil Beds

All hotels in Manitou Springs - Affiliate disclosure
There are several lesser known national monuments in the American west that preserve the sites of important fossil discoveries, though in most cases all the exposed specimens have been removed so little of interest remains to see, such as at Fossil Butte in Wyoming. But not at Florissant Fossil Beds, 35 miles west of Colorado Springs in the foothills of the central Rocky Mountains, where the highlight is a group of petrified sequoia stumps, the largest 41 feet in circumference - all still upright and in their original positions, part of a pretty, pastel-colored landscape of yellow-green grassy plains bordered by low wooded hills.

The sequoia (or redwood) stumps are the most visible and spectacular relics in the national monument, although the main discoveries in this area were many thousands of smaller fossils - plants, insects, fish, birds and mammals - which have been excavated from the thin-layered sedimentary rocks beneath the hillsides since the late 1800s when the significance of the location was first recognized.

Abert's squirrel
This region of Colorado was once covered by a large, shallow lake, surrounded by a dense, moist forest, flourishing during the late Eocene period around 35 million years ago. Examples of typical fossil species found here can be seen in a museum by the visitor center; none are visible to the casual observer in situ in the surrounding countryside apart from at a few limited sites used for modern-day excavations, which may only be visited if accompanied by a ranger. Away from these sites, and the sequoia stumps, the majority of the 3 by 4 mile park consists of empty, undulating land of streams, meadows, woods and valleys, crossed by 14 miles of trails - pleasant scenery, but no different to many other nearby places.

Partly because the park is quite small, and to protect the fossil resources, there is no camping within the national monument. Instead, paid sites can be found in various locations nearby such as Mueller State Park or Pike National Forest - this latter also offers free camping, such as along FR 240 south of Lake George.

Florissant Fossil Beds National Monument is reached by a side road (Teller County Route 1, to Cripple Creek) that forks south off US 24 at Florissant (see map below), a tiny town of consisting just of a few dozen houses and several shops. The first notable site is the Hornbek Homestead, a cluster of aged wooded buildings about 100 feet from the road, set in the middle of a wide, grassy valley one mile wide, with tree-covered hills in the distance.
Affiliate disclosure

This picturesque but lonely place was home to pioneer woman Adeline Hornbek, originally from Massachusetts, who moved here in 1877, at that time single but twice married and mother of four children. She successfully filed a claim for 160 acres in this as yet unsettled but fertile land, which although quite remote was close to a trading post at present-day Florissant, and had a reliable year-round supply of water (Grape Creek). The main dwelling was built in the first year, various outbuildings soon added, and the ranch land was used for growing crops and raising cattle, all remaining a thriving business until Adeline's death in 1905, age 71. Today, as then, the largest edifice is a two storey house, and although this has been partly restored, and the scattered smaller buildings were brought here from other historic sites nearby (the original structures having been removed by subsequent landowners), the place is still evocative and all the buildings certainly look authentic, with weathered timbers and rusty ironwork. The home contains a number of period items such as a bed, pictures, table, etc, which can be inspected close up on the few occasions when the homestead is staffed by the NPS; most of the time it is locked. One other part of the site is a 'root cellar', built a little way up a hillside to the north; this is a reconstruction of a structure once used by the Hornbeks for storage of food.

The visitor center at Florissant Fossil Beds National Monument is one mile south of the Hornbek Homestead, at the end of a short side road - part of what seems a relatively large cluster of NPS buildings for this small and isolated park. The entrance fee (2020) is $7 per person, paid via the self-pay system at a booth just outside. Two large sequoia stumps are found just behind the center, both are protected by a metal canopy and supported by wires, so they do not look very natural. More stumps, smaller and less well preserved, can be seen on the quarter mile, paved Ponderosa Loop Trail through the neighboring woodland, including one that has a new tree growing out of the center. But the main specimens are along the one mile Petrified Forest Loop, which passes five well preserved stumps in a natural setting, unprotected apart from wooden fences - largest is the Big Stump, 12 feet across. Most of the path crosses open, grassy meadows, quite close to the highway. The trail also passes the Scudder Pit, one of the original fossil excavation sites, but which has nothing of obvious interest to look at. All the sequoia stumps, and the museum, can be seen in not much more than an hour. Florissant Fossil Beds is a day use area, open 8 am - 6 pm in summer, 9 am - 5 pm other seasons, and the side road is closed after hours, though there is nothing to stop visitors parking by the highway and walking along the various trails.

Apart from the Ponderosa Loop and the Petrified Forest Loop through the fossil area, the forests and meadows that make up the remainder of the national monument can be explored along six trails, all of which are quite easy and have only moderate elevation changes: