Highlights:
Best location in the USA to see petrified wood, here found in a particularly beautiful range of bright colors. A scenic drive runs through the park, also passing a section of the Painted Desert, several trailheads and many overlooks
Nearest city with hotels:
Holbrook, 18 miles
Management:
NPS
Location:
35.060, -109.781 (north entrance) 34.792, -109.891 (south entrance)
Seasons:
All year; not too hot in summer, and receiving only light snowfall in winter
Rating (1-5):
★★★★★
Weather:

Black Forest
★★★★★
2.5 miles, 350 feet
Partly off-trail hike to a wilderness area in the Painted Desert, including many complete petrified trunks

Viewpoints
Overlooks and short trails along the 20 mile section of the park road between the railway and the southern entrance; six main areas
Conservation - measures taken to prevent thefts of rock samples

Geology - how the stone logs were formed
Featured Hotel 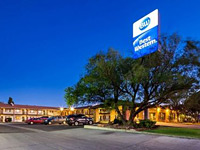 Popular hotel with outdoor heated pool, at the northeast end of Holbrook, 23 miles from the northern entrance to the national park along Interstate 40

All hotels in Holbrook - Affiliate disclosure
On first impression, the Petrified Forest may not sound very appealing as it comprises stone log fragments scattered over a rather remote and otherwise featureless section of Arizona desert. Apparently it comes as a disappointment to some who expect the trees still to be standing in thick rocky groves instead of lying flat in sections as they are. But the petrified logs are extremely beautiful with most unexpectedly bright colors, and the park contains a section of the scenic Painted Desert so it is well worth a visit especially as the site is quite easily reached, being close to the main east-west route interstate 40.

The North - the Painted Desert

A 27 mile road runs through Petrified Forest National Park, from exit 311 of I-40, south to US 180. The surroundings are for the most part empty grasslands, and the closest town is Holbrook, 26 miles to the west. The visitor center is at the north end and there is a small museum at the south entrance. In the north, the first few miles of the road wind along the rim of a mesa overlooking the Painted Desert, past 8 viewpoints of the rolling multicolored landscape, with one short trail along the cliff edge. The patterns visible in the eroded soft sedimentary rocks are due mainly to hematite (red), limonite (yellow) and gypsum (white), and the colors are especially striking at sunset. The park boundaries have been extended twice, in 1932 and 1970, to include a large area of the desert to the north, and although there are no maintained paths in this region, off-trail hiking and back-country camping are permitted; the main destination is the Black Forest, which has large amounts of petrified wood, darker in color compared to other locations, and including many complete trunks, together with badlands and photogenic, eroded rock formations. Also in this area is Onyx Bridge, a 40-foot tree that spans a dry wash, though the log partially collapsed a few years ago. One more recently accessible destination (free permit required) is the Devils Playground, an area of badlands and hoodoos near the west edge of the park, reached from I-40 exit 303 and explorable by a 7 mile partial loop hike. The Painted Desert extends about 150 miles across northeast Arizona, from the Petrified Forest towards the Little Colorado River, Tuba City and beyond.

Dry wash through the Painted Desert

After the final overlook of the Painted Desert (Lacey Point), the park road turns due south, crosses the interstate and a branch of the Atchison, Topeka & Santa Fe railway, then passes through the petrified region. The first feature of interest is an Indian ruin - Puerco Pueblo, originally a collection of 76 rooms and a kiva - which is toured by a 0.3 mile loop trail, and is just one of over 500 archaeological sites within the park. Another is found 1.5 miles south at Newspaper Rock, a sandstone outcrop bearing hundreds of petroglyphs dating from around 1000-1300 AD. There are more petroglyphs along a short side track close to the south edge of the park (starting from Giant Logs museum), but the main viewpoints along the southern section of the park are of the petrified wood. Unusually for a national park, there are no extended trails in the area, only short paths close to the road.

Partly to protect the natural resources, there are no developed campsites in Petrified Forest National Park; the only camping allowed within the park is for backpackers in the Painted Desert/Black Forest wilderness area, north of the interstate. The surrounding land also has patches of petrified wood, and is privately owned and fenced off, so there is no place for free camping nearby. The closest options for this seem to be one of several junctions of I-40, either side of the park turn-off - exits 303, 320 and 325, each of which has short tracks leading into the desert where overnight parking/camping is possible.

Buckskin Gulch, Utah - here, petrified wood is scattered around the start of the Wire Pass side canyon