Highlights:
Large artificial lake along the Green River, extending many miles into Wyoming. The Utah section is bordered by high red cliffs and the surroundings are partly wooded, but most of the lake has a desert-like appearance
Nearest city with hotels:
Green River (WY), Vernal
Management:
BLM, USFS
Location:
40.914, -109.421 (Flaming Gorge Dam)
Rating (1-5):
★★★★★
Seasons:
All year 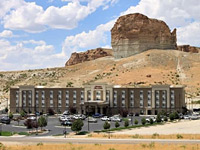 The best hotel in Green River, Wyoming, a few miles from the northern end of the NRA. Amenities include an indoor pool and free hot breakfast

All hotels in Green River - Affiliate disclosure
The Green River originates near the continental divide in the 13,000 foot Wind River mountains of central Wyoming. By the time its waters flow into the Gulf of California, after joining the Colorado, they will have passed through six National Park or National Forest Service units - the first is Flaming Gorge National Recreation Area (NRA), centered around a large artificial lake formed by Flaming Gorge Dam. The other five are Dinosaur, Canyonlands, Glen Canyon, Grand Canyon and Lake Mead.

The gorge is managed by the US Forest Service as part of the Ashley National Forest and offers varied recreational activities including fishing, boating, swimming, camping and rock climbing, though it is not renowned for its hiking opportunities. A fee of $5 (2020) is charged for entry to specific recreation sites, though travel on the main roads (and visits to the dam) are free. The most scenic area of the NRA is in Utah where the lake lies beneath steep red cliffs of Weber sandstone, on account of which the canyon was originally named in 1869 by the famous one armed explorer John Wesley Powell, whilst on his travels along the Green and Colorado rivers. However, most of the lake lies in Wyoming; the river has been flooded for 91 miles above the dam, almost as far north as the namesake town of Green River on I-80.

Spring Creek, near the east shore of the reservoir

There are few facilities in the Wyoming part of Flaming Gorge - here the landscape is high desert, not especially scenic, with low scrub-covered hills sloping gently down to the water. The main north-south road WY 530 passes along the west side of the lake a few miles from the shore, and about a dozen dirt tracks lead towards the water. Two of the more well used tracks are FR 006 and FR 164/150 (see map), both quite steep in places but generally in good condition; they split into several branches near the shore and lead to pleasant, flat beaches where overnight parking is possible just a few feet from the lakeside. There are few signs of any other visitors, but a wide assortment of wildlife is commonly encountered - antelope, lizards, rabbits, cows and many species of birds, plus the more dangerous scorpions and western rattlesnakes. The NRA has a couple of officially designated water-side campsites along the west shore, reached by paved access roads (to Lucerne Marina and Buckboard Crossing Marina) although it seems possible to stay free almost anywhere else.

Shoreline near the dam

Approaching the reservoir from the mountainous east side is less easy - there is a main road (US 191) but for the most part this runs about 15 miles from the water, although it is more scenic than WY 530, climbing up to 8,000 feet and crossing an impressive, deserted landscape of peaks and valleys, with many tracks leading east and west into the empty countryside. The unpaved Flaming Gorge Road (RD 33) does follow the east shoreline for most of the lake and offers some access points, though a 4WD vehicle is generally required. Apart from a viewpoint just north of Flaming Gorge Dam, the lake is visible just from one place along US 191, where the highway crosses Spring Creek; from here a better quality track leads to the shoreline, 4 miles away.

US 191 crosses passes right over the top of Flaming Gorge Dam, 500 feet above the downstream water level.
Affiliate disclosure

The dam was completed across Red Canyon as recently as 1964 after six years of construction, and may be visited free of charge. Either guided or self-guiding tours are available. The surroundings of the dam are not particularly scenic, consisting of low, stepped, wooded hills, rather dull in color, which slope gently down to the water's edge. The dam itself is functional rather than elegant; it is quite narrow, topped by various concrete buildings and machinery, though the view from downstream is quite impressive. The best vantage point is along a short side road just to the north, a route which continues steeply down to an access point alongside the Green River, directly below the dam. There are several beaches on the lake just west of the dam, suitable for picnics, or watching the many birds roosting on nearby Osprey Island. To the east, Red Canyon continues in its original state across a little-visited area of Utah towards Dinosaur National Monument.

Cliffs on the east shore

West of the lake, road WY 530 becomes UT 44 after the town of Manila and the land begins to rise as the Uinta Mountains approach; these are the only major east-west range in the USA and extend 100 miles westward to Salt Lake City. The character of the lake changes as it becomes enclosed by steep cliffs - there is a particularly scenic section as the road winds around Sheep Creek Bay, an inlet at the end of a long valley formed along the Uinta fault zone, where tilted red and white stratified ridges extend for many miles in most directions. A paved road follows the twisted sedimentary layers west along Sheep Creek Canyon - this region is officially protected as a Geological Area, and a small fee is charged to enter. The first six miles have the best formations, then the road turns southeast, crossing higher land with trees and meadows, and eventually rejoins the main highway.

East of the bay, UT 44 moves away from the water and climbs into a hilly pine forested area. After a few miles a short side-road leads to the Red Canyon visitor center, built right on the edge of the cliffs which are over 1,000 feet high at this point. Part of the exhibition room overhangs the gorge, giving rather uncomfortable views vertically down to the water far below. There is a short nature trail leading to an promontory with overlooks up and down the canyon, and a longer path that follows the canyon rim eastwards. Between the visitor center and the dam are many campsites and picnic areas, although most are in the woods of the Ashley National Forest and not very near the lake.

Thundercloud above the lake