The Whiterocks Trail encounters sandy flats and extensive white slickrock, while the linked Lava Flow Trail crosses lava deposits, passing three caves, and a short spur climbs to the best overall viewpoint on the park - all part of a loop completed by walking along the park road

Type: Loop, partly along a road

Usage: Low for the Whiterocks Trail, high for the Lava Flow Trail

Most paths in Snow Canyon State Park are quite short, and they intersect, allowing for longer, loop hikes, and one of the best is the 3.8 mile circuit along the Whiterocks and Lava Flow trails, completed by a walk along the park road. The loop encounters rocks in the three colors that characterize the park - white, black and red; it starts, in the north, by crossing a sandy flat and traversing part of a big outcrop of white sandstone, then descends towards an expanse of overgrown lava, passing three lava caves, and links with a short spur to a red rock summit that gives the best overall views of the park.

The upper part of the hike - the Whiterocks Trail - is much less busy than the southern section around the lava caves, since the Whiterocks trailhead is beyond the popular scenic drive, and not well publicized. From the overlook, another path heads west towards the floor of the main canyon and could be used to make a longer hike, but this loop is completed by walking east to the park road and north along Hwy 18 to the start point. The elevation change is moderate, at 650 feet, and the hike can be completed in less than two hours. The three lava caves may be entered easily, though to explore them fully requires a torch, and some scrambling.

North section of the path

24 views along the Whiterocks and Lava Flow Trails.

The hike can begin at the Lava Flow trailhead along the scenic drive, however the Whiterocks trailhead is a quieter alternative; this is along Hwy 18, outside the paid section of the state park though still marked as a fee area. This location is 11 miles north of St George.

The Whiterocks Trail heads west over a sandy, sagebrush plain, dotted with small lava outcrops, then crosses a small dry wash lined with pinyon pines, and arrives at a junction near the base of a steep white rock slope, formed of thin-layered, cross-bedded Navajo sandstone. Left is the main path, while right is a spur that ascends a little way up a minor wash to a slickrock amphitheater, from where it is easy to climb further up the smooth slopes, for better views. The main route continues south along the base of the white rocks, past plenty of large specimens of banana yucca, and comes close to a white sandstone dome crossed by fine bands of yellow, as the land begins to fall away to the west, dropping down by 200 feet. The trail descends the slope, initially quite steeply while staying close to the dome, then more gently, moving away from the outcrop over a broad sandy ridge with a sprinkling of trees.

Spur to the overlook

The land opens out after a while and the trees fade away, replaced by silver cholla, a large, branched, very spiny cactus that can reach a height of six feet. The path veers west to avoid the edge of the lava flow, and passes the first of three lava tube caves, soon followed by a junction, which marks the end of the Whiterocks Trail; ahead is the Lava Flow Trail. Keeping right, the path soon passes the second cave, more popular, soon after which is another intersection, beside the third cave; this is with the spur to West Canyon Overlook - a short climb of 100 feet to the summit of an isolated red knoll, which gives a fine, 360 degree panorama of the whole park (see 360 degree panorama), and across to the distant Red Mountains. The loop is concluded by walking back north a short distance then along the other path at the first junction - this goes east, over part of the lava flow and across a rocky drainage to the parking area for the Lava Flow Trail. The start point is then 1.2 miles away, up the northernmost section of scenic drive then half a mile alongside Highway 18.

Entrance to one of the three lava caves 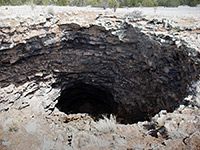 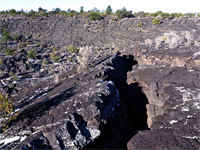 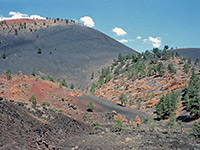 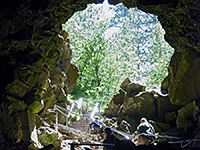