The northwest corner of New Mexico, south of US 64, is mostly flat and treeless - a high desert plain crossed by shallow, branched washes, tributaries of the San Juan, Chaco and Puerco rivers. Much of the area is part of Indian reservations (Navajo, Jicarilla Apache, Jemez and Zia), and although outwardly empty and barren, there is scattered habitation all across the region, and large oil and gas fields, hence many good quality dirt roads cross the backcountry. The only well known attraction in this generally little visited part of the state is Chaco Culture National Historical Park, yet the surrounding desert hides vast expanses of incredible eroded rock formations of every color and form imaginable - some protected as wilderness areas, others still virtually unknown and unexplored.

Bisti hoodoo
They are known collectively as the San Juan Basin Badlands, even though some occur on the east side of the continental divide and so ultimately drain into the Rio Grande rather than the San Juan River (see map), and they feature four distinct components. Most widespread are the badlands themselves - undulating mounds of mud, clay and soft sandstone, in subtle shades of yellow, brown, pink and purple, plus black and white. They are generally found beneath the edge of a mesa or alongside a drainage, and extend up to 20 miles at some locations. Sprinkled across the badlands are innumerable spires, hoodoos, caprocks, ridges and other weird stone formations, created by millennia of erosion of harder rock layers within or between the softer strata. The third feature is petrified wood, ranging in size from tiny flakes to complete trunks up to 50 feet in length and 6 feet across at the base, in places still in an upright position, complete with roots. In the Southwest, only the Petrified Forest National Park in Arizona has a greater concentration of mineralized trees. Fourth, least obvious but perhaps most important, are fossils. Many complete dinosaur skeletons have been excavated in the badlands, and small bones may still be seen by the watchful visitor.

Location of badlands in the San Juan Basin.

Subtly-colored region with varied hoodoos and other eroded formations. Also has much petrified wood, and occasional dinosaur fossils

Small summit rising above many square miles of pastel-colored cliffs and badlands, with occasional hoodoos. A good location for free primitive camping

The most famous badland region, also the easiest accessed and the most varied; miles of weird and wonderful eroded sandstone formations, of every color and shape imaginable

Adjacent to Bisti; badlands and narrow, branched ravines with hoodoos, fossils and large pieces of petrified wood, including complete trunks up to 100 feet long

Scattered sandstone formations - hoodoos, badlands and petrified dunes, plus fossils and petroglyphs. Nearby is the San Ysidro Anticline, a colorful ridge of upturned strata

Badlands in the West

The badland region is bordered by the San Juan River in the north, the Chaco River in the west, the San Pedro Mountains and other ranges in the east, and Indian Road 9 in the south. The western half of this area is the flattest, least vegetated, lowest in elevation and most desert-like; further east the land rises, forming low hills, mesas and deeper ravines, all rather bushy and partly tree-covered. The formations here are generally more scattered, less concentrated and more overgrown, hence the best, most photogenic landscapes tend to be in the west.
Affiliate disclosure

The only (relatively) well known location, and the easiest reached, is the Bisti Wilderness; the recently upgraded BLM trailhead is just 3 miles from NM 371 via a good gravel track. Bisti has some of the best hoodoos anywhere, a fair amount of petrified wood, and a great range of colors and shapes; the most concentrated hoodoo section is quite compact, stretching only for about 3 miles. The badlands continue northeastwards into the larger De-Na-Zin Wilderness, whose hoodoos are more separated, but some sections are very spectacular and have much petrified wood, and overall the place has just as much splendor and variety. To the south, the Fossil Forest is a smaller area of badlands, cliffs, hoodoos and, most notably, upright petrified tree stumps. Nearby is the similar Ah-Shi-Sle-Pah region - a Wilderness Study Area rather than a Wilderness, meaning the level of protection is less, though the scenery and geological qualities are the same. East of here are several badland groups with no special designation, either side of Betonnie Tsosie Wash, none of which seems to have been much explored (though dinosaur fossils have been found here), and the same applies to a number of larger areas to the west, on the Navajo Reservation between NM 371 and the Chaco River, such as the Burnham Badlands. The only other developed location hereabouts is Angel Peak Recreation Area, a few miles south of Bloomfield, which has many square miles of striated badlands, though eroded rock formations are not so widespread. 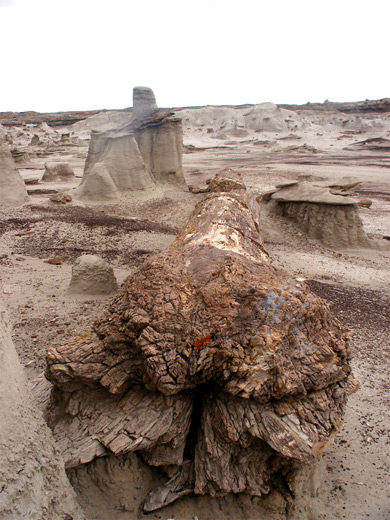 Base and trunk of a petrified tree

Badlands in the East

In the eastern half of the region, the badlands are found in a band either side of the continental divide, between the towns of Lybrook and San Ysidro. The terrain here is more irregular, including peaks, valleys and ridges, and also has greater vegetation. The Lybrook Badlands are the largest region, extending across ten miles, are quite easily reached from nearby US 550, and contain several quite steep escarpments so cross-country travel is a little more difficult. The next recognized locations are Cejita Blanca Mesa, Ceja Pelon Mesa and Penistaja Mesa, all rather remote, but still with extensive hoodoos, colorful rocks, and in particular, petrified wood - Ceja Pelon is said to have the greatest concentration anywhere in New Mexico. The easternmost three sites are also fairly similar to each other - San Jose, Mesa de Cuba and Ojito (a recently established Wilderness Area, created 2005). They each have scattered hoodoos, sandstone formations and petrified wood beneath isolated mesas, separated by bushy plains and patches of badlands.

Rocks in the west half of the San Juan Basin are Cretaceous in origin, while those in the east are from the later Tertiary period; the border is approximately along US 550. This 'K-T boundary', dating from 65.5 million years ago, is important as it coincides with the extinction of the dinosaurs and the appearance of mammals, hence the interest in the fossil record of the badlands.
Affiliate disclosure

Four distinct layers make up the majority of the exposed rocks: the lowest and oldest, widespread in the west, is the Fruitland Formation, a mixture of sandstone, shale and coal, plus bright red-purple rocks created by underground coal fires - stones from this layer cover much of the surface in places like Bisti and De-Na-Zin, and form strange hoodoos where the caprock is a cluster of the metamorphosed coal (known as a clinker). Above the Fruitland rocks lies the soft shale of the Kirtland Formation, responsible for the extensive yellow-black badlands of De-Na-Zin and Ah-Shi-Sle-Pah. High elevations in the De-Na-Zin Wilderness are from the overlying Ojo Alamo formation, first of the Tertiary period, and consisting of sandstone/shale that forms badlands and large caprock hoodoos; this is also a good source of petrified wood and other fossils. Further east, the badlands between Lybrook and Cuba are made of the even more recent Nacimiento Formation, a varied assortment of shale, silt and sandstone, all particularly rich in petrified wood. The Ojito Wilderness in the southeast contains rocks from a different age, much earlier in the Cretaceous period, including the Morrison, Mancos and Dakota strata.

Only the Bisti, De-Na-Zin, Ojito and Angel Peak badlands have signposts and official trailheads, but the extensive network of dirt tracks mean that all places are fairly easy to reach, assuming the land is dry. Because the terrain is flat and the soils clayish, the road surfaces are generally smooth and firm, made of hard pressed mud, so most are fine for all cars. A small amount of rain, however, can make them difficult even for 4WD vehicles. All the major tracks are identified with a county sign bearing the road number so navigation is straightforward, in conjunction with a good map. There are very few recognized trails in the badlands, but despite the low relief and the lack of significant landmarks, cross-country hiking is not too difficult. Apart from the large but nameless badlands west of NM 371 which are on the Navajo Reservation, all others are part of public, BLM-managed land so free camping is possible anywhere nearby, and the wild, evocative surroundings make overnight stays in these locations very memorable.

All photos of the badlands