Similar to its near neighbor the Bisti Wilderness, De-Na-Zin Wilderness Area is a remote, high desert region of colorful, low relief badlands, split by many branched dry washes and containing innumerable eroded rock formations, fossils and pieces of petrified wood, including complete trunks up to 100 feet long. The wilderness is managed by the BLM and has no facilities apart from one trailhead, reached by a drive of at least 11 miles on unpaved roads; from here, the badlands extend about 5 miles north and over 10 miles east-west, merging with the Bisti Wilderness to form a 15 mile wide preserve. This pathless expanse would take many days to explore fully, though most people just visit the mile or so either side of the entrance.

Compared to Bisti, the De-Na-Zin badlands are more vegetated, the terrain more uneven and the hoodoos less widespread, found either singly or in small clusters, surrounded by featureless mud hills, dry washes and grassy slopes. In places, however, the scenery can be even more spectacular, such as one location 1.3 miles northwest of the trailhead, which contains the largest pieces of petrified wood anywhere in the San Juan Basin.

Highlights:
Large expanse of badlands and narrow, branched ravines, with scattered hoodoos, fossils and pieces of petrified wood, including complete trunks up to 100 feet long; adjacent to the better known Bisti Wilderness
Nearest city with hotels:
Bloomfield, 35 miles
Management:
BLM
Location:
36.312, -108.002 (BLM trailhead)
Seasons:
All year, unless the access roads are impassable due to rain
Rating (1-5):
★★★★★

San Juan Country Road 7500 runs close to the south edge of the De-Na-Zin Wilderness Area, linking the two major highways in this region, NM 371 and US 550. The western approach, from NM 371 is a wide, good quality dirt/gravel route across grassy flats and mud hills that passes a few minor junctions and after 13.4 miles arrives at the small parking area for the wilderness (on the north side), marked by a BLM sign and trail register. The eastern road is signposted from US 550 at Huerfano Trading Post and is also in generally good condition, as all back roads in this part of the state are used by oil/gas trucks so are regularly maintained, though still liable to be impassable for a while after recent rainfall. Many other tracks branch off in all directions and the junctions are no longer signed to the wilderness area, but all turnings have the road number indicated so the correct route is easy to identify, and CR 7500 reaches the trailhead after 11.0 miles. Most land hereabouts is part of the Navajo Indian Reservation, and the road passes close to a number of residences, but the wilderness is surrounded by public lands hence free primitive camping is permitted.

At the trailhead a disused vehicle track heads due north, reaching the edge of the plateau after 0.3 miles, from where a vast tract of badlands, mud flats and washes comes into view, colored in muted shades of yellow, brown and gray. A fair proportion is overgrown, with bushes, grass and small trees but there is plenty of bare earth and exposed rock, just not so many hoodoos or other distinctive formations; the scenery is not so promising at first sight. A bushy ravine parallels the edge of the plateau to the west, separated from the main valley by a narrow ridge, while just beyond, to the north, is the wide, meandering De-Na-Zin Wash, which splits into several tributaries to the east and north, all becoming quite deep, winding beneath unvegetated clay hills, black or yellow in color. The terrain is more uneven to the west, at the far side of the wash, while further north are many other distant escarpments and badlands, and several drainages (Hunter Wash, Alamo Wash and Willow Wash).

The most interesting region in view from the edge of the plateau near the trailhead is the uneven, eroded terrain to the northwest, about 1.2 miles away. The easiest way to reach here is first to walk west along or just below the plateau edge, over sandy land with scattered but quite large pieces of petrified wood and a few isolated hoodoos formed of orange-brown sandstone supported by white mudstone - one is especially distinctive (photo), looking out northwards over the valley. A tributary ravine forms just south, cutting through orange, potmarked sandstone and causing the plateau to split into a narrow promontory, whose sides are easy to climb down, leading to the streambed of De-Na-Zin Wash near where the drainage makes a tight U-shaped bend.
Affiliate disclosure

The wash is lined on the north side by white badlands strewn with small, multicolored pebbles, beyond which, a short distance northwest, is a large basin filled with twisted, fractured rock - the uneven terrain visible from the trailhead. In some places the white mud hills are liberally sprinkled with petrified logs, and also by strange, dark brown sandstone balls, perfectly spherical in shape, and often forming small hoodoos, supported by thin columns of the soft, underlying mudstone. The white layer is topped by a band of cream to white sandstone and then by a thicker layer of richly colored, golden-brown sandstone that has eroded into the most fantastic forms imaginable, with all kinds of complex and delicate hoodoos, narrow ravines, undulating mounds and narrow pinnacles. On top of this brown rock are massive pieces of petrified wood including many near-complete trunks, up to 100 feet long and 6 feet thick at the base, in places lying criss-cross on top of each other. The logs form caprocks, arches and thin ridges; some are fully exposed, on the surface, while others are partially buried by soil or surrounded by the sandstone. A few exposed sandstone outcrops contain holes where logs used to reside but have since eroded away - this location is unusual in that the logs are partially enclosed by harder sandstone, unlike most petrified wood in the Southwest that is found embedded in softer layers. The combination of weird, colorful rock formations and the huge petrified trees make this perhaps the single most remarkable location in the Bisti/De-Na-Zin wilderness. The basin stretches about half a mile, at the southeast corner of a 1.5 mile wide plateau that is lined on all other sides by a narrower though still interesting belt of eroded badlands. Most parts of De-Na-Zin Wash have much more scattered features, however, though there are still a fair number of large and photogenic hoodoos throughout the valley, and colorful pieces of petrified wood. 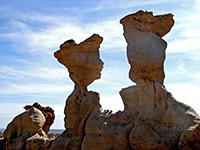