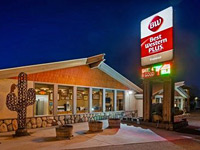 73-room hotel with mountain views; on the south side of Lone Pine, just 3 miles from the Alabama Hills. Free full breakfast and an outdoor pool

All hotels in Lone Pine - Affiliate disclosure
The Alabama Hills are a group of low ridges and peaks in Owens Valley, eastern California, extending eight miles from north to south, and characterized by large outcrops of exposed, weathered rocks, mostly coarse-grained, strongly-jointed granite, richly colored in shades of brown, merging with greyish metamorphic rocks on the east side of the hills. The area lies just within the northern reaches of the Mojave Desert, at elevations around 5,000 feet, and the scenery of rounded rocks, sandy flats and varied vegetation is similar to some of the desert preserves further south including Joshua Tree and Sand to Snow, with the added feature of arches; the erosion of boulders and fins, augmented by the harsh winter weather and the wide yearly temperature range, has created several hundred significant spans, none especially big compared to the sandstone formations of Utah, but quite varied in shape and aspect. The largest (Charred Arch) is about 22 feet across, while most are in the range one to five feet.

The hills are made even more scenic by the spectacular backdrop to the west, formed by the very steep east face of the Sierra Nevada, which rises just five miles away, peaking at the highest point in California, 14,496 foot Mt Whitney. In the other direction are the lower but still impressive Inyo Mountains, on the far side of Owens Valley. The hills are easily accessed from US 191 and the town of Lone Pine, via the paved Whitney Portal Road, which later climbs 3,500 feet to the Mt Whitney trailhead. A mostly unpaved but good quality track (Movie Road) winds northwards through the central group of rock formations, a route named on account of the many Western films and TV series that were set amongst the hills, this location being somewhat closer to Hollywood than the more extensive wilderness landscapes in Arizona and Utah. Besides photography, general exploration and rock climbing, the hills are also a fine location for free primitive camping; dozens of short side tracks lead to secluded places along the edge of the rocks, even if the popularity of the region at some times of the year can make it hard to locate a quiet, private site, away from other people.

Vertical fin
The name of the Alabama Hills dates back to 1863, following the wartime exploits of the CSS Alabama, destroying or capturing many ships of the Union; successes honored by the Confederate-supporting gold miners of this region. At first a number of individual claims were so named, but later the designation spread to encompass the whole area.

Map of the Alabama Hills, showing roads, arches and other features.

Whitney Portal Road forks westwards off US 191 in the center off Lone Pine, which is a small town but one that provides all necessary visitor facilities and services. The road very soon leaves the developed area, passing some fields of small boulders, then winding through a short valley at the near edge of the hills, here mostly lacking any rock outcrops.
Affiliate disclosure

It emerges at the head of the valley to a wide, mostly flat plain which five miles ahead meets the Sierra foothills. Most of the road parallels Lone Pine Creek, a small but year-round stream. Movie Road branches right (north), leading to by far the most visited section of the hills, while soon after is the junction on the south with Horseshoe Meadows Road, leading through a smaller rocky area beside a rounded hill named Rattlesnake Mountain, and later intersecting Tuttle Creek Road, which descends another winding ravine back to Lone Pine. The (fully paved) meadows road continues 17 miles to a trailhead high in the Sierra, for hikes to the Cottonwood Lakes. There are a few dozen arches along these two roads, in the southern part of the hills, but the majority are to the north. Whitney Portal Road passes more exposed rocks for a couple of miles before crossing a bushy flat as it approaches the mountains; along this section is just one well-known arch, though one of the best around - this is Whitney Portal Arch, reached by a half mile hike.

The unsigned, relatively little-used parking area for Whitney Portal Arch is 2.5 miles past the Movie Road junction, on the north side. From here, a narrow but well-defined path descends slightly to a footbridge over Lone Pine Creek, here flowing through a recently burnt area of bushes and small trees, then runs westwards, initially alongside a fence then over the flat land between the creek and the nearby hills. The arch comes into view after about ten minutes walking - on the ridgeline, around 200 feet up, reached by an easy climb up a gully and between some large boulders. The arch is named for the view of Mt Whitney, nicely framed within the seven foot span when seen from behind; several other arches along Movie Road offer similar scenes. The arch has formed in a thin fin, aligned approximately north-south, and is photogenic, and somewhat different, from all directions. Crevices in the coarse brown rocks all around conceal a number of unusual and brightly colored wildflowers, including red scarlet milkvetch and pink daggerpod. 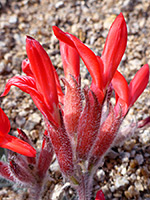 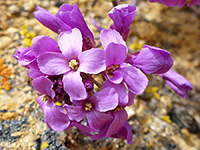 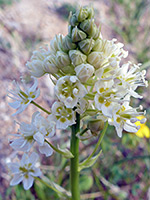 Movie Road, its surface initially paved then firm sand, leads through a narrowish corridor flanked by hills that conceal many small arches, mostly on the right side, after which the land opens out to a larger empty area, Movie Flat, crossed by numerous tracks. Ahead, just after a bend to the right, is the parking area for the 0.3 mile hike (the Arch Trail) to perhaps the most famous arch in the hills, Mobius Arch. The path descends to a minor wash, climbs up the far side and runs along a ridge, right past the narrow, slender Lathe Arch, its opening six feet wide but just a few inches deep. Mobius is a little way beyond, at 12 feet across one of the biggest in the hills, and appearing even larger when viewed from behind, framing the mountains, as here the adjacent rocks are lower. The path, now less used, descends a short, steep slope, crosses another wash and an open area then continues to the small Heart Arch and the more scenic Behind the Heart Arch. In the vicinity are other striking formations, including isolated boulders and narrow fins. The path later returns to the road, allowing a loop hike of one mile. Another of the larger and more well-known arches is Eye of Alabama, a quarter of a mile further north along Movie Road (east side) and quite high above, part of a steep line of narrow fins, and surrounded by vertical rock faces that make close-up views hard to obtain. The sandy flats below contain several large clusters of cottontop cactus, demonstrating that this is still a desert region. The onwards road passes a few other arches, generally quite dispersed and more difficult to locate; the densest group is to the south, east of Movie Flat, though even here many of the formations are rather small, some just a few inches across.

One of the more hidden features of the Alabama Hills is a small drainage, the shallow upper reaches of which are often dry, but the lower part is enclosed and usually contains flowing water, in particular once below the junction of several forks, which come together in the vicinity of Movie Road, near the Mobius Arch trailhead. At this point the streamway is quite overgrown, filled with bushes that have stiff, rigid branches, so an easier approach is to walk across the rocks on the north side for a few hundred feet then descend into the hidden valley below. For several hundred feet the stream is largely free of bushes, often flowing over bare rock, before entering a narrow, slot-like section, at one point running beneath a big balanced boulder. After here it becomes filled with bushes once more and is harder to follow. In the valley the creek forms tiny pools and cascades, and is lined by riparian plants including monkey flower and meadow death camas.

51 views of the hills

Behind the Heart Arch