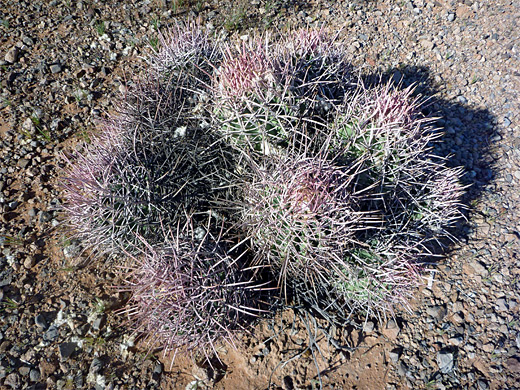 Echinocactus polycephalus is found all over the Mojave Desert, in four states, and is easily recognizable since it forms conspicuous mounds of large, spherical plants (up to 9 inches across), each protected by a dense mat of long, thick spines, growing on narrow ribs. Clusters may have up to 50 individuals, though 10 to 20 is more common. The grey, pale yellow or reddish spines (up to 5 inches long) are covered with a thin, felt-like substance, which weathers away after a few years. Spines grow on narrow ribs - 10 to 20 of them - with 4 long centrals and up to 15 shorter radials.

The small yellow flowers appear during early summer at the tip of the plant, often not opening fully owing to the thick lattice of spines. 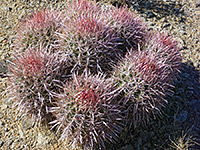