Plants > Cacti > Echinocactus
Echinocactus plants resemble some of the ferocactus species; they are spherical or barrel shaped, have dense and/or thick spines arranged along ribs, and may be single or clustered, though they do not reach the great heights (up to ten feet) of the larger ferocacti. They are known by the common name of stout spined cactus, and only three species are found naturally in the Southwest; most common is echinocactus polycephalus of the Mojave Desert. Many people will however be more familiar with the Mexican species echinocactus grusonii, since this is used extensively as a landscaping plant. 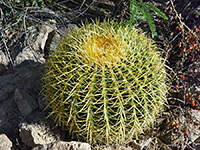 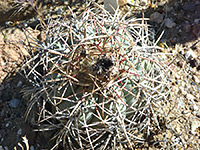 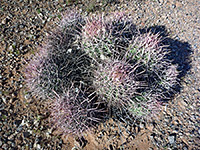 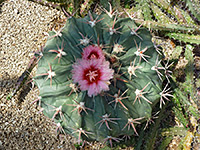