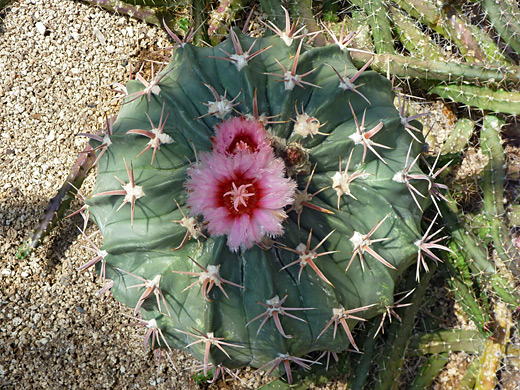 Echinocactus texensis is known as the horse crippler cactus since its rigid, flattened stems with their strong spines often lie partly hidden in the prairies of Texas and New Mexico, a danger to any animal that stands on it. The plant is locally common in some places, like Big Bend National Park, but relatively rare in most of its wide range, which extends from the far southeast of New Mexico, across two thirds of Texas towards the Oklahoma stateline and the Gulf Coast. The species has good tolerance for frost and variable rainfall, hence its adaptation both for the hot Chihuahuan Desert and the moister grassland and woodland further east.

The cactus is usually (at least) twice as wide as it is high, and may reach a diameter of 12 inches. Ribs are wide and prominent, bearing clusters of spines at intervals of 1 to 2 inches. All spines have narrow lateral grooves; the 5 to 7 radials are shorter, but still thick and sharp, while the single, downwards-pointing central spine is longer, up to 3 inches. Both the salmon pink flowers and bright red fruits are quite striking, and the plant is popular amongst cacti collectors, partly due to its resilience, being both frost-hardy and tolerant of increased watering. 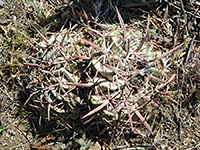 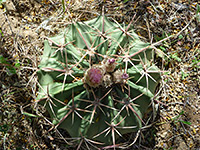 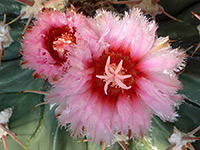