Rarely traveled, off-trail route to the Colorado River down a narrow, twisting canyon containing a permanent stream, which forms many pools, cascades and waterfalls. Accessed by the Grandview Trail and a short section of the Tonto Trail

Season: Fall and spring; the upper section of the Grandview Trail may be snow-covered in winter, and all is very hot in summer, although drinking water is available year-round in the canyon and at Page Spring

Trailhead: Grandview Point, half way along the East Rim Drive

There are seven official routes to the Colorado River along the main section of the South Rim of the Grand Canyon (Boucher, Hermit, Monument Creek, Bright Angel, South Kaibab, New Hance, Tanner), all of which follow side canyons, but additional, off-trail approaches are possible along some of the other tributary drainages. These usually have permanent streams flowing through pretty sections of narrows, and such is the case for Hance Creek, which forms a canyon several miles long right at the southernmost section of the South Rim, between Grandview Point and Moran Point. The upper reaches are very wide, but the canyon deepens and narrows below the Tonto Bench, taking a winding course through the Tapeats formation then the underlying pinkish grey rocks of the Vishnu schist, accompanied by numerous pools, cascades and chutes, plus a few bigger falls and chokestones, before joining the Colorado just upstream of Sockdolager Rapids.

The approach to the lower canyon of Hance Creek is via the Grandview Trail, taking the easternmost of the three continuation paths down to the Tonto Trail, which meets the creek 4.5 miles from the Grandview trailhead; from here the river is still 4 miles away, so the round trip of 17 miles (4,860 feet) will take most people at least two days. It can still be done as a day hike however. Below the Tonto Trail, the route down the canyon is relatively easy for most of the way, but the drainage is blocked by three impassable obstructions, two which require long, testing climb round routes, up and down very steep slopes covered by loose rocks. The third has a rather shorter bypass route. Footprints suggest the first mile or so of the canyon is explored occasionally, but very few hikers continue past the first obstacle. For backpackers, there are two camping locations, one at Horseshoe Mesa (3 miles from the trailhead), the other a dispersed area beside Hance Creek just below the Tonto Trail. Drinking water is not generally a problem, as the creek flows year-round and an alternative permanent source is provided by Page Spring, close to the trail below Horseshoe Mesa.

Stream through the narrows

Rocks around a pool

The hike to Hance Creek is via the Grandview Trail followed by a short section of the Tonto Trail. The Grandview trailhead is at Grandview Point, the most southerly of the south rim overlooks, at the end of a short spur road. The trail descends steeply over partly wooded slopes to a narrow place (the Coconino Saddle) at the south end of a semi-detached mesa, then follows beneath the west edge of the mesa, descending less steeply, high above the deep canyon of Cottonwood Creek to the west. The land opens out once at the far end of the mesa, and becomes level at a longer saddle, forming the south edge of Horseshoe Mesa, site of some old copper mine workings. This is a popular location for a half day hike (6 miles round trip). The path reaches a four-way junction beside some spoil heaps; all three branches descend another 1,100 feet or so to the Tonto Bench. The west fork follows the Cottonwood Creek drainage, the middle crosses Horseshoe Mesa and drops below the far side, while the east branch leads to Hance Creek. This zig-zags down the plateau edge, past some more mine relics and a short side path to Page Spring, then descends further to a dry streambed and over a low ridge to the junction with the Tonto Trail, 4 miles from the trailhead. All this route is described more fully in the Grandview Trail section.

The lower end of the path from Horseshoe Mesa traverses open hillsides and plains, dotted with barrel cacti and pink flowered prickly pears, and across a gentle ridge between a side drainage and the main canyon of Hance Creek to the east. The Tonto Trail comes into view a little way below, and is joined at an unsigned junction. The Tonto then contours southeast, staying level, close to the creek as it becomes steadily shallower, passing a few small tributaries that look as though they may provide a shortcut to the canyon floor, but the trail soon descends there anyway, at a point where the walls are just 40 feet high and the drainage is a few hundred feet across. The camping area is close to the path, on flat, bushy land a short walk from the flowing creek. A little trail leads down to a group of cottonwoods beside the stream, after which the route is right along the streambed, or on benches at either side.

Hance Creek to the First Obstruction

The Hance Creek streamway is not too overgrown, and contains no large boulders, so walking is relatively quick. Vertical, dark colored, thin-layered cliffs of Tapeats sandstone rise up and the ravine is moderately narrow for a few hundred feet, but the walls open out quite a lot, becoming sloping rather than sheer, as the stream meets the underlying metamorphic layer. This initial section of narrows is winding, cool and shady, while the next half mile or so is straight and open, and hence very hot in summer. The creek is now bordered by grassy banks, rock piles, trees, grass and bushes plus a moderate selection of wildflowers, until the next enclosed section - a tight curve where the canyon is U-shaped in cross-section and the water flows over smooth rocks, mostly dark grey but crossed by pink veins. One pool requires wading to pass. Not far beyond is the first of three obstructions; a small waterfall immediately followed by a higher drop. The bypass route is a few hundred feet back, on the east side, about 80 feet up a very steep slope to a rock pile then down about three times as far, initially over boulders then grassy slopes. Cairns mark a faint path. Once back in the streambed, a short walk upstream reaches a small cascade and the base of the larger falls.

Cliffs near the Colorado

The second obstacle is less than a quarter of a mile downstream, soon after a tight bend to the west. The bypass route is rather further back, on the west side, marked by a cairn. Again this involves a testing climb, up a very steep slope covered by pinkish rocks to a narrow ridge, and then a lengthy descent down boulders and scree on the far side, into a minor, boulder-filled drainage, which leads back down to the creek. From the ridgetop, the vertical cliffs bordering the far side of the Colorado River can be seen for the first time about one mile distant. The ravine still contains flowing water, tumbling over the tallest falls in the canyon just upstream, but in the other direction the creek usually drops below ground for a while, reappearing much closer to the river, just before the third and last obstacle, a big chokestone. This is a little way beyond a smaller chokestone, still about 15 feet high, passed by climbing down a notch to the right. The last bypass route is via the slopes on the left (west) side, a much shorter but still steep and rather unstable climb, then down the far side to a sandy beach beside the Colorado. The mouth of the canyon just to the east is narrow, overgrown and rather inconspicuous. Sockdolager Rapids are downstream while upstream is a relatively smooth section of the river stretching half a mile before curving out of sight. Cliffs form on both sides of the canyon mouth so very little of the shoreline is accessible.

More flowers along the creek
Nearby Trails 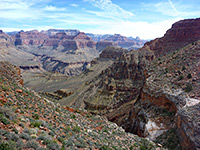 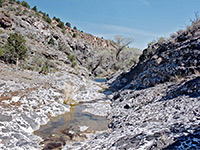 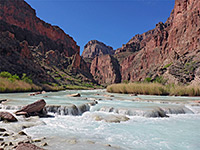 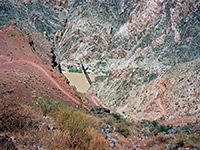 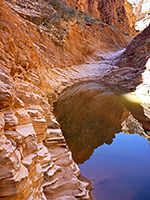