Shorter of the two maintained rim to river routes, running for most of the way along a narrow ridge, giving excellent views

Difficulty: Steep, strenuous and lacking any water sources, though there are restrooms and an emergency phone along the way

Type: One way; crosses the Tonto Trail and then the Colorado River, where it joins the Bright Angel and North Kaibab trails

Season: Accessible all year; partly snow-covered in winter and very hot in summer

Trailhead: Along the side road to Yaki Point, which is reachable either by free shuttlebus or a half mile walk from the highway

The South Kaibab Trail, the best and least traveled of the two maintained Grand Canyon South Rim paths begins along the side road to Yaki Point, a short distance along the East Rim Drive. It is no longer possible to park at the trailhead since the side road has been closed to all private vehicles to prevent overcrowding; instead the road is linked to the main visitor center complex by the free shuttle bus system. Alternatively, visitors may park along the highway by the turn-off and walk the one mile to the overlook, or the half mile to the trailhead.

For most of its 6.5 mile length the South Kaibab Trail follows the top of a ridge and so has extensive views along the Grand Canyon in both directions, however there is little shade. The trail descends 4,820 feet in total; there is drinking water at the start and at the river but not in between. Hence because of steepness, exposure to the sun and lack of water the South Kaibab is more difficult and strenuous than the Bright Angel although it is slightly more scenic.

The path begins by descending into a side ravine (Pipe Creek) but soon the walls open out allowing for magnificent views both west and especially east along the canyon. After 1.5 miles and a descent of 940 feet the NPS have installed restrooms along Cedar Ridge, which is a sensible target for a half day hike; certainly far fewer people progress beyond. The trail continues fairly straight, going down steadily but not too steeply, curves around O'Neill Butte after 2.5 miles and then descends very sharply with a long series of switchbacks towards the Tonto Plateau after 4 miles.

Steps on the trail

Bridge on the Bright Angel Trail

An easier, flatter section passes a place known as The Tip Off which is just above the rim of the Inner Canyon Gorge - here are located more restrooms and an emergency phone. The rocks in the canyon walls opposite are composed of ancient metamorphosed granite, mineralized and particularly colorful, exhibiting many shades of red and purple. The last section is steep again, especially the part just above the river, which is clearly visible for the last mile or so of the descent. At the end of the trail there is a short tunnel which leads directly onto a suspension bridge, one of two which cross the Colorado River (the other is for the Bright Angel Trail, half a mile downstream). The bridge is sturdy enough but it is still a little alarming to be perched high above the muddy, fast-flowing river, swaying slightly in the wind.

Cliffs to the north

Around the Colorado River

After a short distance walking along the north side of the Colorado one arrives at the Phantom Ranch buildings - a guest house, campsite, ranger station, mule stables, etc. and suddenly, lots of people - most of the trail is pleasingly empty especially during the middle of a hot, sunny day in August when I went. Drinking water is provided, from a hand pump, and there are plenty of cool places to rest alongside the nearby Bright Angel Creek; from here the North Kaibab Trail leads to the North Rim visitor complex, 14 miles away. Some people stay the night at the ranch before hiking out the next day but this requires booking a long time in advance - maybe up to one year. This is also the place to phone for help if needed. I hiked back to the top on the same day, a 6.5 hour round trip (13 miles). The hardest places on the return journey were the steepest; just after the suspension bridge, and the climb up from the Tonto Plateau after 3 miles. Despite the oft-repeated warnings of the NPS never to attempt to walk from rim to river and back in one day, there is no reason why fit hikers should not attempt the trip, as long as the weather is not too hot. 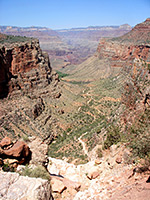 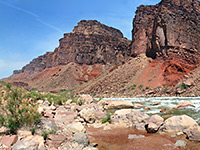 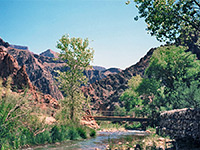 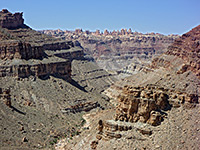 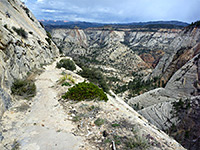