This trail follows the Gibbon River a short distance then climbs rather steeply to a largely extinct geyser basin, containing many small hot springs and some tall geyserite cones, a few of which occasionally emit puffs of steam

Trailhead: Pullout on the west side of the highway, beside the Gibbon River

Tucked away in the hills at the south edge of Gibbon Meadows, Monument Geyser Basin (adjacent to the larger Gibbon Geyser Basin) is one of Yellowstone's smaller thermal areas, and is not often visited, despite being unusual, and easily reached, just one mile from the main road albeit via quite a steep trail. The unique feature of the basin is a group of tall narrow geyser cones, mostly dormant, though the largest (Monument Geyser) emits regular puffs of steam and occasional boiling water; surrounding them is an unstable region of many small pools and vents.

Besides the basin itself, the path provides nice views over the surroundings as it makes the 600 foot climb from the highway, taking in Gibbon Canyon, the volcanic cone of Gibbon Hill, the flat grasslands of Gibbon Meadow, and the more distant steam clouds rising above Norris Geyser Basin.

Meanders of the Gibbon River across Gibbon Meadows

The signposted trailhead has a small parking area beside a bridge over the Gibbon River - 8.6 miles from Madison junction and 4.5 miles south of Norris, near the end of steep-walled Gibbon Canyon just as the cliffs open out to the meadowland. If full there are two other pullouts just beyond, next to several steaming hot pools on the river banks.

The Monument Geyser Basin Trail starts off quite level, running through the trees northwards along the canyon edge, mostly a little way above the river though descending to water level after 0.3 miles, when Gibbon Meadows first come into view, ringed by steam clouds from the hot pools around its edges. At the far end of the valley, the trail makes an abrupt turn southwest and ascends the hillside, climbing steeply without any switchbacks, up a sloping grey rhyolite rock face covered with small lodgepole pines dating from after the 1988 fires. The surface is loose and rather slippery, especially in wet weather. Views become good near the end of the climb, when the river canyon and the meadows are visible through the trees. The path ends at an unfenced viewpoint of the basin, which is quite compact but exhibits plenty of activity.

A sulfurous smell permeates the air, and the unstable ground emits hissing and bubbling noises from numerous small fumaroles, vents and mudpots, both hot and acidic. The surface is quite thin and brittle, formed of deposited sinter in a variety of colors. The largest features are the old geyser cones - the tallest (Monument Geyser) is 8 feet high but just 2 feet across at the base, and produces regular puffs of steam plus infrequent eruptions one or two feet high. The basin was rather more active when first discovered, by P. W. Morris in 1878, and contained several quite regularly performing geysers, but a gradual decrease in subterranean water levels over the years has dried up the vents. The adjacent cones are even more dormant, emitting just an occasional faint whiff of steam though most are now completely extinct, and in some areas the formerly whitish, barren ground has become partly revegetated.

Only a limited amount of the basin can be seen close up from the viewpoint, and although a sign warns of the dangers of straying from the path, a careful walk around the perimeter does reveal rather more. A total of 30 active thermal features have been identified but Monument Geyser is the only one with a common name. To the north, the wider landscape is slightly obscured by burnt tree stumps but a fair amount of the meandering Gibbon River is in view, curving lazily across Gibbon Meadow, with many geyser plumes beyond, emanating from Norris Basin in the north and Sylvan Springs to the west. 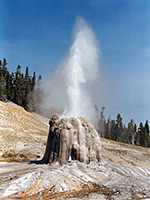 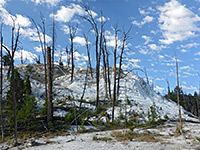 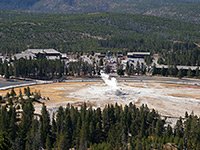 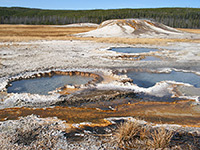 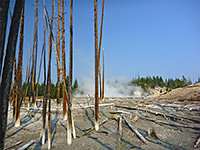