Most accessible of Yellowstone's backcountry geyser areas, reached by an easy walk down a disused vehicle track alongside the Firehole River, through undamaged, old growth forest

Type: One way. Path continues, to Shoshone Geyser Basin and other locations

Trailhead: Short spur road on the west side of the highway, 2.5 miles south of Old Faithful junction

The 2.5 mile trail to Lone Star Geyser, the centerpiece of one of Yellowstone's four backcountry geyser basins, starts beside the Grand Loop Road two miles south of Old Faithful Village, next to the Firehole River and just upstream of the Kepler Cascades. Here, the creek tumbles 150 feet over a sequence of falls in a jumble of whitewater and boulders, a spectacle easily viewed from a roadside parking area. Above the cascades, the river is much more peaceful and slow moving, as it flows southwards through a wooded valley, turning away from the highway.

The wide, level trail (formerly a vehicle track) follows on the east side for a while then crosses over to the west; this is one of the few footpaths in the national park that is also open to bicycles. At first the valley is wide, bordered by gently-sloping hills, though these steepen after a mile so that the river becomes enclosed in quite a narrow ravine. Occasional steam vents and small pools are found in clearings in the lodgepole pine forest but the first major feature is 1.5 miles further, after the path has curved round to the west, where the valley opens out to an area of meadows and grassland.

Lone Star Geyser has a large cone 12 feet high, and erupts regularly and predictably about every 3 hours, blasting water and steam up to 50 feet in the air, its performances lasting up to 30 minutes in several distinct phases of activity - an impressive sight, all the more so because of the remote setting. The major eruption is often preceded by minor discharges between which are several minutes of quiet, so it is best to wait up to an hour to be sure of viewing the main action. The NPS have placed a logbook for visitors to record the eruptions, and so help others arrive at the right time for the next one. When originally named, the geyser was thought to be completely isolated but now 11 more have been identified nearby, divided into the Basset, Bridge, Campsite, Channel and Lone Star groups, though this is still the smallest basin in the park. Apart from Lone Star itself, the only others with an assigned name are the Buried, Black Hole and Perforated Cone geysers; most are away from the path and not easy to locate.

There are many hot springs and vents scattered around the Firehole River to the south, and along two tributaries of the river that run down the from hills on the east side. After Lone Star, the path curves round a small hill and meets the Howard Eaton Trail that links with Old Faithful, 3 miles north. Turning left (south), the trail crosses the Firehole River once more and enters a region of several dozen small but pretty pools, then climbs over a ridge and descends back to the river and a large area of marshy meadows, before turning away from the valley, over the continental divide at Grants Pass and down towards Shoshone Lake and Shoshone Geyser Basin. 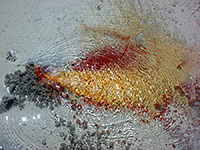 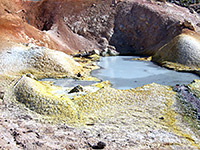 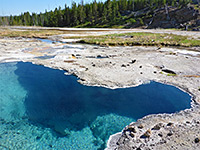 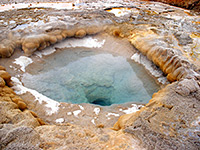 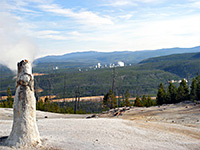