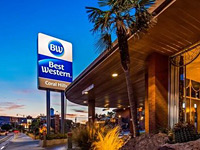 Popular hotel with an elevated position on the north side of St George, 18 miles from Gunlock State Park. Free hot breakfast and an outdoor pool

All hotels in St George - Affiliate disclosure
Gunlock State Park in southwestern Utah is a small preserve containing a reservoir along the Santa Clara River, and some low hills at either side. The place is not so much visited, despite being just 20 miles from St George and Interstate 15, partly as it lies along a quiet back road and is only signposted in the near vicinity. The scenery is generally similar to the much busier Sand Hollow State Park on the far side of the city - both are surrounded by sandy mounds and occasional eroded formations, all formed of orange-red Navajo sandstone, and both are popular mainly for camping, fishing, swimming, boating and picnicking. At Gunlock there is also one hiking trail, crossing the earthen dam on the south side of the reservoir and curving round the far shoreline, across the most scenic area, while another short path leads to the usually dry tributary of Manganese Wash, which just south of the park enters a shallow slot canyon, just before the river confluence.

The park is reached by Gunlock Drive (once the Old Spanish Trail), between old Highway 91 at Shivwits and Vega on Highway 18. The land south of the reservoir is part of the Shivwits Indian Reservation, and contains the verdant valley of the Santa Clara River, filled with large cottonwood trees and much undergrowth. On the east side of the reservoir, below a bench of black lava blocks, is the tall western face of the Red Mountains, an extensive Navajo sandstone exposure that extends five miles into Snow Canyon State Park. The land on the west side of the park has lower relief, and is crossed by a few branched drainages of which Manganese Wash is the largest.

The state park was established in 1970, the same year as the construction of the dam, and is situated 2 miles downstream of the small town of Gunlock, which is named after William 'Gunlock' Hamblin, a Mormon pioneer from Ohio, who settled here in 1857.

Gunlock State Park is staffed only at busy times. The entrance fee (2020) is $10, collected by the self-pay system, while camping is $20 per night. The highway runs along the eastern shore, past four access points; the main location is along a short side road, to the boat-launch ramp and the primitive, five-site campground. The reservoir is comparatively small, its shoreline only about 5 miles long, but deep enough to have a healthy population of fish, mostly bass and crappie. The most scenic area is to the southwest, reached by walking over the earthen dam, past a rocky outcrop, across the top of the spillway and along a sandy track that stays close to the waters edge for a while before climbing to higher ground and veering west, exiting the park. Some pretty, rocky inlets opposite tiny islands can be reached by scrambling down from the track. The lakeshore is in places a little spoilt by litter, and the surrounding land is often used by cattle.

Perhaps the best feature of the state park, photographically, is the shallow slot canyon along the lower end of Manganese Wash, reached by walking southwest from the spillway for a quarter of a mile. The drainage has a pebbly or sandy floor, and the lower third of a mile alternates between short cliff-lined sections and slightly more open patches; the narrowest part is 6 feet across and the tallest cliffs are about 25 feet high. All cuts through the richly colored Navajo sandstone. The darkest passageway is towards the lower end, shortly before the wash meets the Santa Clara River, where a path/track on the north side leads back towards the spillway, alongside the overflow channel, filled by jumbled rocks that create spectacular waterfalls on the rare occasions when in use, during floods. The canyon has no obstructions, and the shallowness, together with the generally west-east orientation, means that for much of the day one wall is in full sun, the other in shadow. 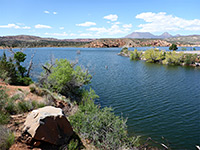 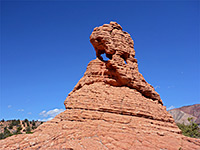 All State Parks in Utah