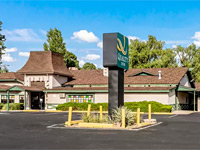 Interior corridor hotel beside I-15 in Payson, near the north end of the Nebo Loop. Complimentary hot breakfast. Some rooms with kitchenette

Hotels in Payson - Affiliate disclosure
For 37 miles the Nebo Loop Scenic Byway winds through the southern end of the Wasatch Range, between Nephi and Payson, rising to a high point of 9,345 feet and affording excellent views of the steep, wooded surroundings, dominated by 11,928 foot Mount Nebo, the tallest summit in the range. Both ends of the road climb up narrow, forested canyons then cross undulating, open land of ridges and plateaus, en route passing campgrounds, trailheads and overlooks, including of Nebo Creek Valley in the east and Utah Lake/Utah Valley in the northwest.

Two other highlights of the drive are Devils Kitchen, where deep red-colored rocks have eroded into sharp pinnacles, and Payson Lakes, at the center of a scenic area popular for camping and fishing. If spending a little time at these two locations, and stopping at all overlooks the full loop takes from 2 to 3 hours, though a walk along one of the longer trails could easily extend this to all day. The most famous hiking destination is the summit of Mount Nebo, to which the shortest route, via the Nebo Bench Trail, is 5.5 miles one way, gaining a total of about 3,200 feet. The Nebo Loop is usually open from May to November, being closed by snow during the winter months.

Devils Kitchen and the South

In the south, the Nebo Loop starts at an intersection with Hwy 132 east of Nephi, in the valley of Salt Creek which divides the Wasatch Range in the north from the San Pitch Mountains in the south. The road heads due north along the valley, past a few farm buildings and into the Uinta National Forest where all development stops, then passes the Jenkins Flat Interpretive Site and the junction with a side road leading to the southern Mount Nebo trailhead. The gradient increases at the head of the valley as the road becomes narrow and winding, with a rather bad surface; an inconspicuous memorial at one steep place marks the site of a 2002 accident in which 6 people died when their tour bus overturned. A little way beyond, the first overlook is of Salt Creek Valley and the San Pitch Mountains, soon after which is the parking for the Devils Kitchen Geologic Area. The access trail is just 1/4 mile, leading to a railed viewpoint at the edge of an eroded ravine containing a collection of pointed conglomerate formations, like Bryce Canyon but on a much smaller scale. The rocks are colorful enough, contrasting with the dark greens of the enclosing trees, though the site overall is somewhat underwhelming.

Mount Nebo and the North

After several more miles of uneven terrain, the next overlook is of the east face of Mount Nebo, a much more dramatic peak than the uniform, wooded hills along most of the route. The mountain sides are steep and treeless, formed of layered limestone strata, kept free of large vegetation by the thick winter snowfall; all of the upper slopes are fairly smooth, lacking any great crags or ravines. The northern trailhead (Nebo Bench Trail) for the summit hike is located a little further along the drive, as the road continues over pristine, forested land - trees are now mostly aspen, mixed with meadows and patches of wildflowers. Many of the meadows are used for (free) primitive camping and have semi-permanent RVs parked there - good bases for hunting, hiking and horse riding. Other named viewpoints are of 10,913 foot Bald Mountain, Santaquin, Utah Valley and Beaver Dam (a deep ravine), before the road reaches the three Payson Lakes, the only site that requires a day use fee, though this is avoidable by parking along the highway and walking a short distance west. A path or road loops around the shore of the main lake (Big East), and another road leads to the smaller Box Lake and McClellan Lake. The road begins its descent a few miles north of the lakes, dropping steeply down Payson Canyon, past another campground and several trailheads to the north entrance station at Maple Dell, then, after a short level stretch along the valley floor, emerges into a recently developed housing estate at the southeast edge of Payson.

Path through a meadow

11 views along the Nebo Loop 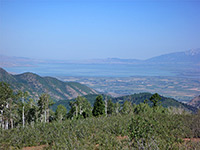 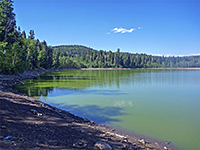