Highlights:
Central peak of the Santa Catalina Mountains, rising over 6,000 feet above Tucson and so offering a respite from the summer heat. The summit is reached by a very scenic, winding road that passes through several different climate zones, from the Sonoran Desert to cool pine forests
Nearest city with hotels:
Tucson
Management:
USFS - part of Coronado National Forest
Location:
32.441, -110.788 (the summit)
32.308, -110.744 (start of the scenic drive)
Seasons:
All year; the summit is pleasantly cool in summer, and the road is plowed during the winter snows
Rating (1-5):
★★★★★ 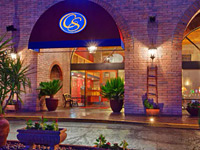 Close to the foothills of Mount Lemmon along Tanque Verde Road; a relaxing hotel built around four elegant courtyards containing mature gardens with an outdoor pool

All hotels in Tucson - Affiliate disclosure
The Santa Catalina Mountains are the largest of several ranges of hills that surround Tucson, dominating the northern skyline and rising to a high point of 9,157 feet (Mt Lemmon), over 6,000 feet above the city. All the high land is within the Coronado National Forest, which extends further southeast towards the slightly less tall Rincon Mountains, around Saguaro National Park. The mountains form one of the largest 'sky islands' of south Arizona - hills that rise far above the Sonoran Desert plains and harbor climate zones typical of lands much further north.

Much of the hillsides are quite inaccessible, reached only by a few trails along canyons, and a sizeable part is an officially designated wilderness area (Pusch Ridge). Some of the lower elevation canyons are popular recreation areas including Sabino Canyon and Catalina State Park, but most activities are concentrated around the Catalina Highway, a bendy, 30 mile road that climbs right to the summit of Mount Lemmon, passing various viewpoints, trailheads, campsites, a village (Summerhaven) and even a ski center near the summit, the southernmost skiing area in the USA - since temperatures on the mountain are up to 30°F cooler than in Tucson, snow is likely for several months in winter, and even in midsummer conditions are pleasant, with highs in the low 80s. The road is designated a National Scenic Byway, one of about 100 in the country.

The Catalina Highway (also known as the General Hitchcock Highway, after Postmaster General Frank Harris Hitchcock who organized its construction) starts towards the east side of Tucson and crosses the suburbs for several miles to the edge of the hills, where the surroundings change quite abruptly to dense forests of saguaro, palo verde bushes and other cacti.
Affiliate disclosure

The road begins to climb, winding around several small ravines then runs alongside steep-sided Molino Canyon, containing a seasonal stream (Agua Caliente Wash) that forms waterfalls and cascades in spring. The cacti fade away above 4,000 feet to be replaced by open, grassy hillsides as the highway crosses the flat land of Molino Basin, location of the first of five campsites close to the road. Next is another climb, of 1,000 feet, over rocky slopes bearing yucca and occasional small bushes, into the upper end of Bear Canyon and through patches of pine/oak woodland, site of a second campground and a picnic area. From here the road switchbacks southwest, ascending high above the canyon to a grand overlook at Windy Point (6,600 feet), next to some unusual eroded rock pinnacles, from where a vast area of land to the west is in view. Turning sharply back northeast, the land is bush-covered for a while, part of the chaparral zone, but round a corner becomes quite densely-wooded with ponderosa & Arizona pine trees, and groves of aspen, and remains so for the final 15 miles to the summit, though still with frequent sweeping views both east and west.

A day use fee of $8 per vehicle (2020) is charged for hiking, parking alongside the road or using the picnic areas, but there is no fee for brief stops at roadside overlooks, visiting Summerhaven or parking at the Ski Center, nor for any visitor on foot/bicycle/horseback. Coronado National Forest campgrounds charge $20 per night.

The road passes a cluster of houses at Willow Canyon and several more campgrounds before reaching a left turn that leads to the village of Summerhaven, in a sheltered, wooded ravine - the far upper end of Sabino Canyon. The village has hundreds of homes, some only occupied for a few weeks each year, several shops, a post office, restaurant, cafe and various lodges. Near Summerhaven a dirt track forks off, descending the northern slopes and meeting a paved highway again at Oracle; this is the only other road to the mountain, though is suitable for 4WD vehicles only. The main road ends just 1.5 miles further at a parking area next to the ski center, though a narrower road continues to the actual summit, on which are built various non-public buildings including an observatory. An alternative way to reach the top is to walk half a mile up the main ski run, a steep but enjoyable climb of 650 feet through the forest. The summit, like some of the lower hillsides, bears the remains of many trees burnt in a big wildfire of June 2003, and so presents a rather barren appearance, with the blackened tree stumps mingling with assorted radio masts and satellite towers. Over 10,000 trees have been planted along the highway to partly replace those consumed.

In good winters when the mountain approaches its average snowfall of 200 inches, Mount Lemmon Ski Valley is open from mid December to early April, offering two double chairlifts and 20 ski runs, with a longest vertical drop of 900 feet. Instruction and equipment rental are provided, and overnight accommodation is available in nearby Summerhaven. But in recent years the snow has arrived late and lasted just a few weeks so the ski season has been much shorter.

19 views of Mount Lemmon and the Santa Catalina Mountains

Narrow part of the road

Top of the mountain