Hike upstream along White Canyon, starting at Sipapu Bridge, alongside a near-permanent stream with pools and cascades, to four groups of Ancestral Puebloan ruins, including rock art panels

Trailhead: Pullout along the loop road, for Sipapu Bridge

Official trails in Natural Bridges National Monument are limited to the paths to the three bridges, which are linked by a route along the floor of the canyon and by another across the plateau, but off-trail hikes are also possible, in some of the other drainages, in particular upstream along White Canyon. As well as pristine scenery, of cliffs and benches, and a near permanent stream that creates pools and cascades, this section of the ravine contains at least four major groups of Ancestral Puebloan (Anasazi) ruins, including plentiful rock art.

The closest two have NPS notices and hiker registers while those further away are unmarked, and (even) less visited. The route starts beneath the easternmost of the three bridges, Sipapu; a lesser trail winds eastwards through a fairly overgrown section of the drainage for one mile to a shapely formation known as Sphinx Rock, beyond which the canyon is more open and walking becomes easier, along terraces and sandbanks either side of the shallow creek. The most distant of the four ancient sites is reached after 3.6 miles, shortly before the national monument boundary, but other ruins are found further upstream along White Canyon, and in the brush-filled tributary of Burch Canyon.

The ruins are not much publicized and as a result are infrequently visited, yet they are easy enough to reach, if not always straightforward to locate, and some time is necessary is to see all sections, hence the hike takes a relatively long time, at least four hours. The trailhead is the same as that used for the hike to Sipapu Bridge, beside the one-way loop road, 2.7 miles from the visitor center.

East side of Sipapu Bridge

The well-used path down to Sipapu Bridge is 0.6 miles long, descending 600 feet, and is aided by ladders in a couple of places. On the east side of the open area beneath the bridge, an inconspicuous path heads upstream through quite dense undergrowth; a short distance along is a sign informing about good practices when viewing ancient sites. The trail soon bends to the north, crosses the stream, rounds a bend and enters a straighter, slightly wider section, where it runs right beside the water. The canyon curves back to the south 0.6 miles from the bridge, and opposite here, on the north side, is the first ancient site, located in an alcove about 50 feet above the streambed.

The first ruins site is marked with an NPS notice and log book, which has on average only about one entry per month. Structures here include three granaries, some low walls, a group of metate holes, a fire-blackened area with a small room behind, and a boulder with petroglyphs above. Lower down, on the west side nearly at creek level, are two small rooms, partly roofed, one bordering another soot-marked wall, the remains of a kiva with a little chimney, and a few large, white pictographs. Also part of the same complex, higher up, is another kiva with a partial brush roof and linked to a room, plus several other doorways and wall remnants.

Past the first site, the stream flows past an abandoned meander on the south side, soon followed, at the next major bend, by a narrower section and a big undercut, which opens out beneath Sphinx Rock, a semi-detached peak also to the south, its shape properly evident only on the far side. The second ruin site is due north of the sphinx, though is not obvious or marked from creek level as all is hidden behind a line of fallen builders, at the foot of a sheer cliff. The main features here, starting at the east end, are a group of red pictographs including bighorn sheep and other faded designs, together with variously colored hand prints and some larger white pictographs, one known as the White Man. A short distance west is a ruin with a collapsed roof, soot-blackened wall at the rear and corncobs on the floor; a passage behind here leads to other ruins including several granaries, a complete (and partly restored) kiva with a locked roof entrance, and several other doorways. Some areas are out of bounds, and loosely fenced off. The site also has an NPS register. More structures can be seen a little further west, but these are completely inaccessible, built in an alcove above an unclimbable cliff face.

Past Sphinx Rock, the stream flows over a few boulders, creating little cascades, and moves around a protruding fin before bending back north, and entering a wide, straight section with less undergrowth, so the hiking becomes easier, up to a north side tributary (1.9 miles from Sipapu Bridge), then east over more flat terraces, passing shallow pools and little waterfalls - a pretty section of the canyon. A promontory to the south creates a big overhang, permanently in shadow, sheltering a small group of ponderosa pine trees growing in the shade of tall, streaked cliffs. Some of the trees are dead, and roots for others are being gradually eroded by floods. On the far side of the promontory, just after a small, north-side tributary, is the third ruin site, above a sandy slope at the base of west-facing cliffs. The main relics are a pair of two-floor granaries, very neat and well preserved, with thin, intermediate floors made of adobe and a lattice of sticks, and similarly intricate constructions for the walls and roofs. Other features are a collapsed roof enclosed by low walls, and a fire-blackened patch with hand prints. Site four is around the next bend, past another old meander - this is on the far side of a protruding fin, above a low slope. Here are found two kiva remnants, one with a partially intact roof. 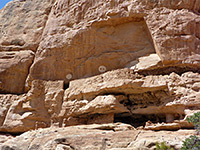 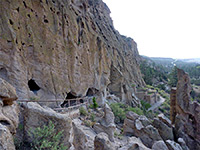 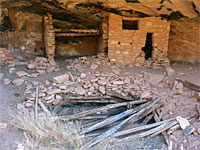 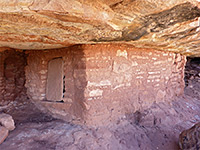